I am delighted to share another beautiful submission for the Monk in the World guest post series from the community. Read on for Melinda Emily’s reflection In Protest.

It’s been a difficult year. And not just for me. Too many friends and family have been put through the ringer. Marriages crumbled. People moved. Children got sick. Addictions took over. Dreams were shattered. A mother died. A sister died. A baby died.

These are just the personal tragedies I am privy to. To say nothing of the state of the nation, the wars of the world, the thousands displaced, and the too many abused.

The world is on fire.

Sometimes I think my body forgets that the trauma and stress of the first nine months of the year has passed. I left my husband. My son and I moved into a beautiful, humble town-home surrounded by towering oaks which dropped their acorns with such gusto the week we moved in that I had to keep reminding myself “it’s just acorns, no one is trying to break in.”

Sometimes I am still gripped by anxiety. I have to root around in my brain to pinpoint the monster that provoked the shaking and the fear and ask if it is true, then give it a little hug and send it on its way. Sometimes I get this sudden feeling that I am about to be swallowed by a hideous void. My ribcage swings inward, collapsing my breath. I stare wide-eyed at the black and terrifying unknown. But for the most part, I am breathing better now. For the most part my ribcage swings outward and the wings beneath my shoulder blades unfurl. Shake off dew. Get ready to fly.

In church on Sunday, the rector told a story about a man in the 1960’s who sat outside the White House everyday and lit a candle in protest of the war and violence in Vietnam. One day a man came up and asked, “Do you really think sitting here like this day after day is going to change the world?”

The man replied, “I don’t sit here to change the world. I sit so the world won’t change me.”

When I was a girl I did not understand how once bright and smiling young people could grow old and bitter and mean. I did not believe that the world was broken.

And then I grew up.

Compared to the displaced, the abused, the trafficked, my personal struggles have been very first world. But they have been significant. They have been mine. And they have broken me. Still, I don’t want to be bullied by the cynicism and bitterness I often feel when I look back on the things that didn’t work out and see them as predictors of future failure.

I’ve been fighting to keep mySelf alive ever since the day I graduated High School full of hope and optimism and as much self knowledge and esteem as an eighteen year old can muster. Each time I put on a scarf, or cut my hair, or read fiction I am sending my fist up in defiance against the onslaught of forces bent on beating it out of me. Writing time becomes a statement to my Soul that I will not abandon her.

There are lessons to be learned from this world. The oak and maple and pine around my home speak slow and deep, telling me not to worry. The world is held in an embrace and I am part of that world.

My soon to be ex-husband and I remain on good terms. The friend who lost her seven month old baby to cancer is on a healing month in New Zealand – a trip funded by an outpouring of support. The Standing Rock Sioux in North Dakota won a temporary stay on the construction of an oil pipeline that would run under their water supply and along their sacred ground. Our church welcomed and helped settle three refugee families this year. My son’s godmother just sent me a picture of her newborn riding home from the hospital in our old carseat.

The rain falls. The sky remains. The trees hold down the earth, keep it from blowing away.

Last night I set my alarm. This morning I got up and practiced asana, moving my body into shape after shape with only the vaguest agenda. I breathed. I lit my candle. I sat.

A monk of the world in protest.

Of cynicism and bitterness and fear. 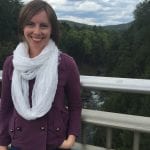 Melinda Emily lives in North Carolina where she is mommy to an exuberant two year old, a yoga instructor, and a novelist seeking to break into publishing. She also formats the Abbey Newsletter, Daily Nourishment E-mails, and Monk in the World Guest Posts, a role which she is deeply honored to play. You can visit her blog archives at TheHouseHoldersPath.com.