Dreaming of the Sea: A Journey with the Selkie Myth ~ A love note from your online abbess 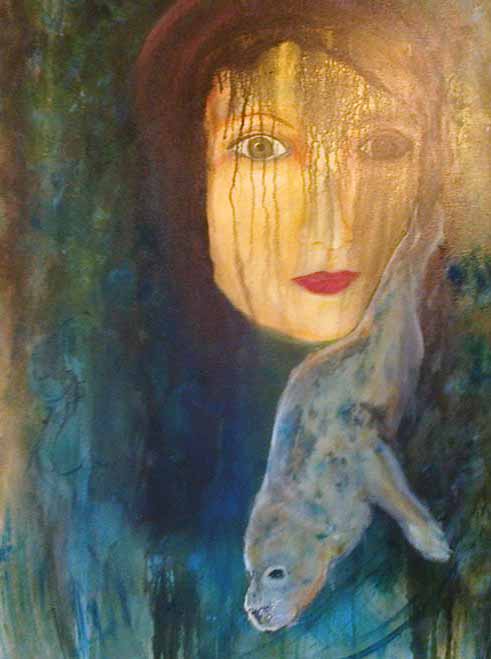 What She Does Not Know
(for unsuspecting Selkies everywhere)

She does not know there is a reason
she always feels out of place
her life rigid and small, like living in a doll’s house
a marriage more trap than longing
and when she chokes on courtesy and convention
the salt which burns her throat is not just tears.

She does not know that when she stands
on the sea’s wild edge and can finally
breathe, dream, weep,
her body strains forward
seawater in her veins, barnacles behind her knees
waves lap her ankles, thighs, torso, her cold breasts.

She does not know that when she swims
in that wide expanse and the swell
pulls her under, she does not need to struggle,
the sea has been longing for her as well –
everyone onshore aghast –
her daughter will grieve and wail and awaken
from dreams of the deep dark water also calling her name.

*(originally published in Tales of the Forest)

I have long loved the story of the Selkie. In the ancient Celtic stories Selkies are shapeshifters. They move between worlds. They are women who take the form of a seal when in the sea and human form on land. These stories appear across Ireland, Scotland, and the Faroes. When the Selkie comes ashore, she takes off her skin, and if this skin is captured by a human, she is forced to stay on land.

Clarissa Pinkola Estes writes in her reflection on the Selkie story in Women Who Run With the Wolves:

In the story, the old seal rises out of its own element to begin the call. It is a profound feature of the wild psyche that if we do not come on our own, if we aren’t paying attention to our own seasons and the time for return, the Old One will come for us, calling and calling until something in us responds. . . We can be too worn down by something. We can be overloved, underloved, overworked, underworked. . . each costs much. In the face of ‘too much’ we gradually become dry, our hearts become tired, our energies begin to become spare, and a mysterious longing for — we almost never have a name for it other than ‘a something’ – rises up in us more and more, then the Old One calls.

Over the last five years of living in Ireland, I have fallen passionately in love with the landscape and the stories that are rooted in it. This work with the power of stories comes from my love for Jungian psychology and working with the narrative structure of the psyche that is illumined through them. They carry us across a series of thresholds, moving inward, and then moving back out into the world again with new gifts and treasures. Stories are potent agents of change. Stories offer us the healing medicine we are so hungry for.

Mythologist Martin Shaw says: “Myth insists that in each of us a great kingdom presides: filled with forests, remote castles, giants, witches, lovers, the dreams of the earth itself. To hear a story well told was to bear witness to the wily tale of your own life meeting the bigger epic that those before you had walked. Such speech was a way you tasted your ancestors. We don’t have such stories: such stories have us.”

Similar to the wonderful stories of saints that I love to enter into with my imagination because they invite me into a bigger life, these old myths can function in the same way.

I am offering an online retreat on the Selkie myth this fall, designed specifically for women. Please join us if you hear the sea calling to you.