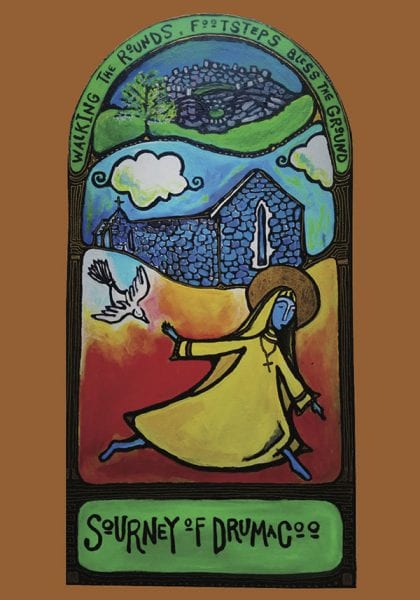 In January I shared two of the new dancing monk icons of Spanish mystics Teresa of Avila and John of the Cross. We also have four new Irish saints which Marcy has painted, inspired by my new book forthcoming this fall – The Soul’s Slow Ripening: Twelve Celtic Practices for Seekers of the Sacred (through Ave Maria Press.)  Each of the twelve chapters includes a story of an Irish saint, so we added four more to our original eight.

In addition to the release of new icons (which are available as prints or cards), we are also releasing an album of Celtic songs compiled from several friends of the Abbey. Please see more details below!

This week I introduce to you St. Sourney.

Sourney is one of the female Irish saints from the sixth century, and while there is little written about her, two of my favorite sacred sites are dedicated to her memory. The first is on the island of Inismor, and is said to be her hermitage. There is a signpost off the main road, but the path is quite overgrown with brambles. The chapel itself is in disrepair, only part of it remains, but standing inside you can imagine the saint there seeking the grace of silence and solitude on the holy island. When you step out the front door you see the wide sea beyond.

Later in her life, she was called to Drumacoo, near the village of Kilcolgan, about a half hour from Galway city. A large church ruin appears behind the cemetery with a more modern mausoleum attached to the side. Further back is the holy well of St. Sourney. When we first visited it, it was quiet overgrown and a bit hard to access without tripping over stones and tree roots. But people from the community and the Office of Public Works have cleared it up beautifully.  There is a now a set of stones in a circle to mark off the opening of the holy well and a clear path around it for walking the rounds, which we do on our own for visits and when we bring pilgrims there.

We don’t know the details of her life and service, but I love that despite this, two beautiful sites persist over fifteen hundred years to carry her spirit forward. I imagine her walking the rounds in these places, and mulling over her own discernment questions and life trajectory. While her written story did not persist, the land holds her memory in stone and water.

Listening at the Threshold:
Voices of the Ancestors