I am delighted to share another beautiful submission for the Monk in the World guest post series from the community. Read on for Colette Lafia’s reflection on her friend, Brother René:

In 2003, at a time in my life when I was experiencing intense loss and grief, from infertility, my sister’s death to cancer, and chronic insomnia, my husband and I made a visit to the Abbey of Gethsemani in Kentucky, which was the home of Thomas Merton.

It was evening when my husband and I arrived in Louisville, Kentucky, so we headed straight to the small guest cottage we had rented near the abbey. Finding ourselves unable to settle down and sleep, we got out of bed and drove along the dimly lit, single-lane road to the monastery in time for 3:15 a.m. Vigils.

Around noon later that same day, we headed back to the monastery, which I could now see was set among open fields of tall grass and rolling hills. With only a few hours of sleep, I was tired and in a funk. “What are we doing here?” I asked my husband, as we trudged up the walkway to the hospitality center. “We’re here to meet some monks,” he said with a smile.

As soon as we entered the abbey’s reception area, I felt more at ease. There were several monks in their black-and-white robes, smiling and mingling with the guests in an atmosphere that was warm and welcoming. They were keeping alive the rule of Saint Benedict, the founder of monastic life, who in the sixth century wrote: “Let all guests who arrive be received as Christ, because He will say: ‘I was a stranger and you took Me in.’”

We walked over to the reception desk, where we were greeted by a friendly older monk. We introduced ourselves. This was Brother René. He looked to be in his seventies and had a palpable gentleness to him. He told us about the nearby hiking trails and the evening talks in the chapel. We chatted about where we were from, and I also asked him a few questions about himself.

I discovered he was of French-Canadian ancestry and from New England, which, coincidentally, was similar to my grandmother’s heritage. I also discovered he would be celebrating his fiftieth anniversary as an ordained monk during the upcoming weekend and that a special Jubilee Mass would be taking place to mark the occasion.

We chatted some more, and then I spontaneously asked him a question that made him pause:  “Are you ever lonely?” I asked.

In truth, I had no idea why I would ask such a thing at that moment. He looked back up at me with his kind brown eyes and replied, “No, just as you have had a companion in your husband all these years, I have had a constant companion in God.”

I didn’t say anything back in response, but only received his words. In that moment, the gulf between us seemed to close, and we were held together in a place of grace. Little did I know that this monk would become my teacher and that I would learn from him how to respond with greater trust and confidence to the difficult circumstances of my life. 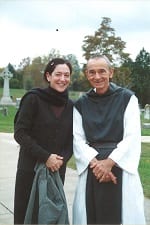 While I was at the monastery, Brother Rene, spoke to me one afternoon and told me that my question had really touched him. It had made him realize that he had always had a companion in God all these years, and that he would mention this in a talk he was to give to his fellow monks on his anniversary. I was touched that I had given him this gift.

Our week at the monastery soon came to a close, and it was time to go home. I somehow knew my time at the monastery had been a turning point. When we returned to San Francisco, my husband and I agreed we would try one last treatment to conceive. I wrote to Brother René and asked him to pray for us as we faced this uncertainty. He wrote back within a week, and thus began our dialogue that would last for many years, about surrender, hope, faith, mystery, loss, God, and the power of love.

Through our regular correspondence, Brother René became my spiritual companion, teacher, and a source of inspiration for seven years. Our friendship shaped me and gave me the courage to surrender to my life, and awakened in me the faith I so desperately needed. My husband and I ended up not being able to conceive, and we subsequently decided not to have children.

In 2009, I made a visit back to the monastery to see Brother René. I wanted to honor a place and a friendship that have led me on my path of surrender. Brother René was now an old man, and as I sat in the church watching him fully participate in the prayer service, pulling himself and down into his stall, my eyes welled up with tears. I was overcome with affection for him and for Gethsemani.

Stirring inside of me was the deep recognition that my relationship with him had profoundly influenced the path I am on. I have come to believe that God brings people together in mysterious and unpredictable ways and speaks to us through these unions. Perhaps they are the holiest and most sacred aspects of our lives.

The friendship I shared with Brother Rene has revealed to me how powerful and important our spiritual friendships are, how they shape our lives and our hearts, and how they are an integral and mysterious part of our journey. I am grateful for this friendship, and even though Brother René has passed away, he lives on within me. 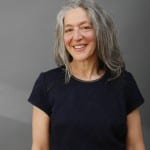 Colette Lafia is a San Francisco-based writer, spiritual director, workshop and retreat facilitator, and part-time school librarian. She is the author of Comfort & Joy: Simple Ways to Care for Ourselves and Others, and the forthcoming book, Seeking Surrender: How my Friendship with a Trappist Monk Taught me to Trust and Embrace Life (Ave Maria, April 2015). She has a passion for helping people connect more deeply with the presence of the sacred in their daily lives and blogs about it at ColetteLafia.com.