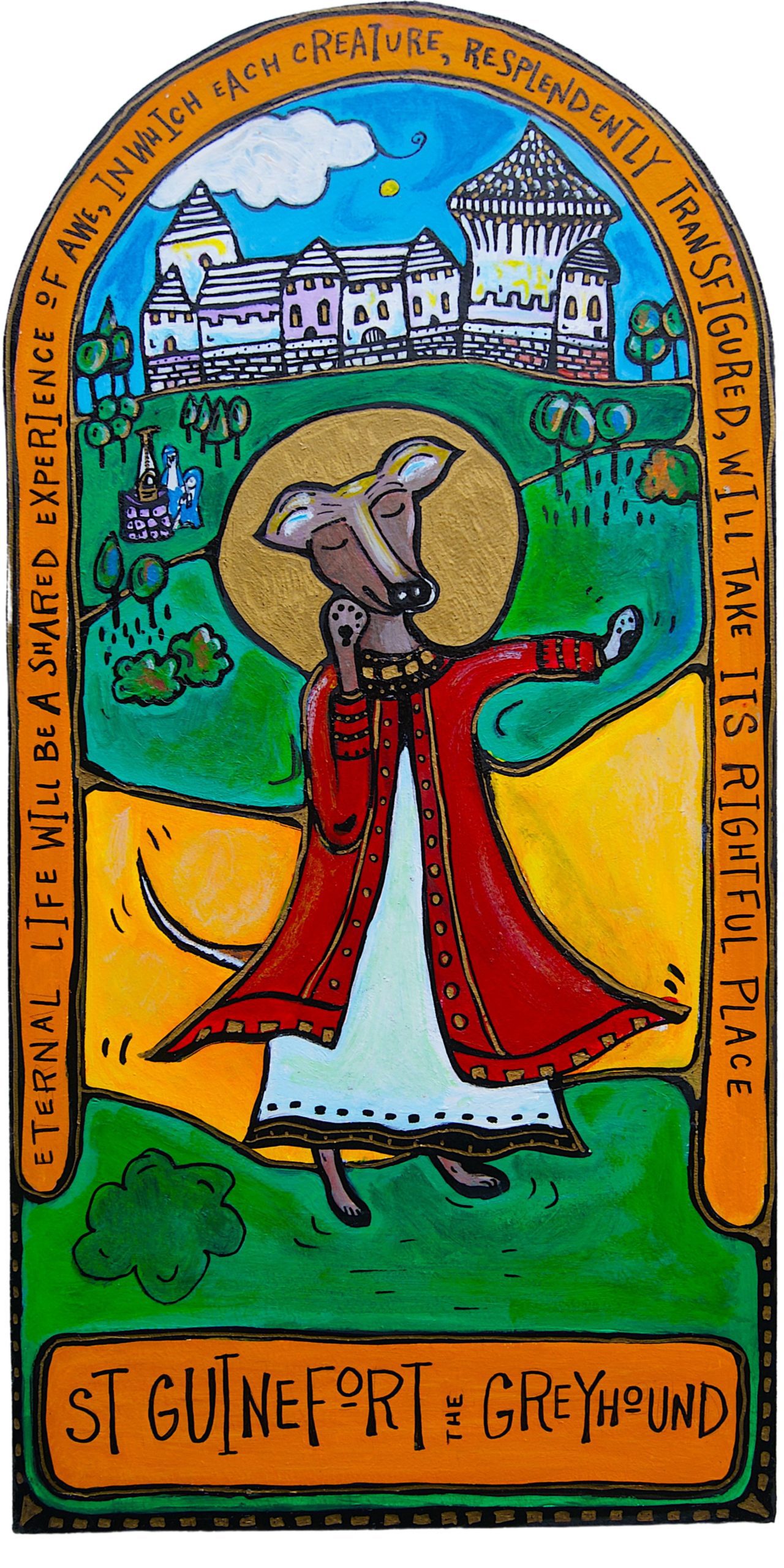 This week we are featuring one of our Hildy Tails. This series of essays were composed last year for our Sustainers Circle. They were dictated to John by the Abbey’s mascot, Hildy the Monk-ey. Hildy is a bit of a free spirit who likes to entertain and doesn’t normally feel constrained by conventional story structure . . . or grammar, in general. She lives by the motto that “all stories are true; some actually happened.” We wanted to share them with you, our wider Abbey community, to give you a small monkey-sized, humorous perspective on some biblical passages and stories of the saints.

Why does Jesus hate figs so much?!?

Oh . . . sorry. John says I need to back up and introduce myself before I get too far into the story.

Hello everyone, it’s me . . . HILDY the Abbey of the Arts mascot. I’m an Irish monkey (I bet most of ye didn’t know we were a thing) who met John and Christine a few years ago on my feast day, the birthday of Saint Hildegard of Bingen. I was working in a charity shop in Galway City’s uber-fashionable West End, contemplating what I *really* wanted to do with my life, when they walked by. I waved. They waved. I waved, again. They popped in and we had a wee chat and before I knew it, I’d quit my part-time job as a store clerk to become a full-time virtual monastery mascot . . . just like my guidance counsellor never said I would.

Now where was I? Oh, yeah . . . Jesus has this weird obsession about a fig tree that he . . . What? Why am I even telling this story? John, you were the one who asked . . . Oh. Tell the people reading why I’m doing this whole series of weird Biblical stories. Great idea. Thanks.

This all started back during John and Christine’s Jubilee Year when I wrote a series of stories about my life and life in Galway. Not to sound like I’ve got what we Irish refer to as “Notions” (i.e. – thinkin’ too highly of yerself), but I did such a BRILLIANT job that John and Christine asked me to write some more stories. (I was really chuffed by the invitation. I mean . . . how could I say ‘no’ to an opportunity like this?) At first I was gonna write about some weird saints, like St. Giles, a man who’s the patron saint of breastfeeding (don’t get me started), but then I realised that I’d have to do a bunch of research about the lives of saints and . . . homework was never my favourite part of school, like. But I’m cheeky and realised that if I decided to write about some odd Biblical figures and strange Biblical stories, then I could just ask John a bunch of questions and get HIM to do my homework for me. (By the way, he’s the one typing while I dictate, on account of my small paws. That explains what John refers to as the less-than-formal writing style you see before you . . . and the grumpy expression on John’s face as he’s just now learning about being my research assistant, as well as my stenographer. Thanks John!)

Anywhoos . . . now that you know a bit about who I am and why I’m telling these stories, let’s actually get back to the first story before John interrupts me again.

But where was I? Oh, yeah . . . Jesus hating figs. (I don’t mean figs that hate Jesus, but that Jesus doesn’t seem to like figs. Or at least he doesn’t appear to like this one fig tree in particular.) Like much of the Bible, there’s more than one version of this story. The Gospel of Matthew has (in this humble monkey’s opinion) a far less interesting interpretation of events and it’s written as a parable in Luke’s Gospel. You see, in Mark’s Gospel, the fig tree story is divided up over a couple days where a bunch of seemingly unrelated and important stuff happens. (But I’ll get to that in a minute; I promise.)

It must have been Mark’s version that I heard first, because I distinctly remember thinking “What’s the deal with cursing the poor fig tree?” and then thinking “The fig tree is back AND IT’S DEAD!” I remember leaving church that day and saying to my siblings, “why would anyone hate something that’s fun to climb on?” But you’re not here to listen to me reminisce about my childhood. Let’s look at the whole chapter and see if we can understand what’s really going on here.

Chapter 11 of Mark’s Gospel starts off with Jesus preparing to enter Jerusalem. He sends two disciples ahead to get a colt for him to ride into town on, to fulfil the old prophecies about the Messiah. (John and I went around and around about whether the prophets knew in advance that Jesus would do this or that or if Jesus knew what the prophets wrote about the Messiah and so picked the colt as a result. I’m still not sure, so I’ll let ye decide for yerselves.) Long-story-short: the crowds come out to greet Jesus and sing his praises and . . . This isn’t a story about Palm Sunday.

It’s really the next day that we’re interested in (or at least I am; I hope you are too). Jesus spots a fig tree and goes up to it to see if it’s got any figs on it. But it doesn’t, only leaves. So Jesus says to the tree, “May no one ever eat fruit from you again.”

Harsh, right? But this is just before Jesus goes into the Temple and drives out the money changes taking advantage of the people coming to worship. All in all, not a very calm Jesus in this chapter.

The day after all of that, Jesus and the disciple pass the fig tree again . . . and it’s completely withered!

The disciples are completely amazed and want to know what happened to the tree. But Jesus uses this as an important lesson about the power of faith (with a nice mini-lesson about forgiveness, giving, and receiving). He even says that faith can literally move mountains, flinging them into the sea!

Or *is* Jesus speaking literally here? Is this story, presented here in Mark and in Matthew as an actual event, but in Luke as a parable, something that really happened? Is that important?

We Irish like to say that “all stories are true . . . and some of them actually happened.” Or (if you’re feeling a bit cheeky) “we never let facts get in the way of a good story.”

What does any of that have to do with this cursed fig tree (I hear ye asking)? Well . . . I think it means that the cursed fig tree (whether it actually existed or not) is symbolic of something else. In the context of Matthew’s Gospel, the fig tree seems to represent the lack of faith of the religious authorities in Jerusalem at the time.

That kinda lets the rest of us off the hook. We don’t have to think about ourselves as the fig tree that lacks faith and/or isn’t bearing spiritual fruit. Trust me, as a creature who loves to climb ON trees, I don’t spend a lot of time thinkin’ about what it means to BE a tree. Yet . . . here I am, askin’ myself not only “how am I like a tree?” but “what kind of tree am I?” Or (to tie it all back into this month’s theme of Harvest) “what kind of spiritual harvest am I producing?”

Did you know there was a greyhound saint? When we discovered the story of Guinefort, a greyhound who had been canonized by popular devotion, we knew we had to include her in our dancing monk icon series.

Guinefort is a folk saint from the 13th century and a canine who was the companion of a French knight near Lyon. Due to a tragic rush to judgement, the knight killed Guinefort because he thought she had eaten his child. But Guinefort had actually saved the child’s life by killing the snake that was about to attack the infant. The knight buried Guinefort in a well, but when locals learned of the greyhound’s sacrifice they began to venerate the tree that grew up near the well.

In my book Earth, Our Original Monastery I write about animals as our original saints, taking inspiration from Thomas Merton who wrote in New Seeds of Contemplation:

“The pale flowers of the dogwood outside this window are saints. . . the bass and trout hiding in the deep pools of the river are canonized by their beauty and their strength. The lakes hidden among the hills are saints, and the sea too is a saint who praises God without interruption in her majestic dance.”