I am delighted to share another beautiful submission to the Monk in the World guest post series from the community. Reverend Simon Ruth de Voil is a member of the Abbey Wisdom Council and longtime creative collaborator. Read on for his reflection on creating a version of Mary’s Magnificat for the Abbey.

Back in 2020, an email from our abbess Christine landed in my inbox on Good Friday. She said her heart longed for a version of Mary’s Magnificat for Abbey of the Arts, would I accept a commission?

I don’t know why I didn’t say OMG I can’t do that. I think if anyone else had asked me to do this I probably would have hid under my pillow. No way could I take on such a bold task! But this was my friend Christine; she wouldn’t ask me to do something unless she genuinely believed it was something I could do. So without even a second of a doubt I said Yes.

There was some divine timing at work. For months I had been praying with Joy Cowley’s setting, Modern Magnificat, and I knew in my heart that the Magnificat was a key in opening the pathway to our unitive consciousness—a key that the world urgently needs right now. I had also been captivated by Jan Richard’s poem, “Gabriel’s Annunciation”. Jan writes,

Yet when the time came,
when I had stammered
the invitation
(history would not record
the sweat on my brow,
the pounding of my heart;
would not note
that I said
Do not be afraid
to myself as much as
to her)
it was she
who saved me—
her first deliverance—
her Let it be
not just declaration
to the Divine
but a word of solace,
of soothing,
of benediction
for the angel
in the doorway
who would hesitate
one last time—
just for the space
of a breath
torn from his chest—
before wrenching himself away
from her radiant consent,
her beautiful and
awful yes.

After saying Yes to Mary’s Yes, I did what I always do when I set prayer to music: I placed myself inside the prayer and listened, deeply listened, to the words and feelings. I don’t try to write anything for a long time, instead I make a space ready within me in case the song wants to take form. That takes its own time, and sometimes quite a lot of time! It was close to a year later, in February 2021, when the song arrived. I remember I was listening to some French nuns singing Gregorian chant to Psalm 4, accompanied by a classical guitar. I decided to learn the guitar part, for no particular reason… and as I did, the entire melody and structure for Magnificat suddenly arrived, along with most of the words. I was, and still am, pretty astonished and delighted, and very grateful to those French nuns. I made a rough recording of the song-sketch and emailed it to Christine. I think she told me it made her cry, which I took as a sign that the prayer was ready.

The first time I publicly shared the Magnificat was during the 2021 Abbey of the Arts Novena on the feast of the Annunciation. Something vital started flowing through me; I felt so fragile, with my voice and guitar holding this cosmic prayer. Luckily I made it through the whole song and the 300 or so folks on the Zoom went nuts! I have never had a reaction like that to a song before or since, and while I soaked up all the love and blessings, what they were reacting to wasn’t truly my song—it was the blessing held within the song. All I can say is: Thank God for that, because if there was ever a prayer that deserved a good song it’s the Magnificat!

My faith has changed since I took on this task of translating the Magnificat into my own authentic song. For once thing, Mary is no longer just a mystery. Her sacred heart touches my heart. When I pray with her I feel more connected to that pulse that beats in all things. She has become a companioning presence that carves a path of healing and renewal where before there was only pain. I pray that others who listen and love this song will meet the sacred mother, just as I did, and be transformed and strengthened by her divine ferocity and unwavering compassion.

I’d like to share one last amazing and everyday miracle that happened while I was recording this song. Because the song was so fresh in my heart, my Easter sermon was very influenced by the Magnificat. I talked about the way that Mother Mary’s witness and presence of the Crucifixion and resurrection births the Christ in Jesus and in us today. I described her as the “mama bear” of Christianity, a face of Godde so desperately needed. Less than two weeks later, as I was arranging the strings for the recording of Magnificat, a lean young black bear passed by my window and proceeded to circle my house! I do live in the woods, but this has never happened before and I felt the blessing of her steady, graceful beauty.

Thank you Godde, for asking me to pray with the Magnificat, Mary’s radiant consent, her beautiful and awful Yes. 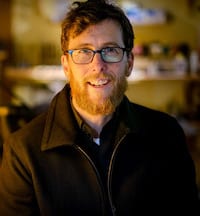 Reverend Simon Ruth de Voil is an interfaith/interspiritual musical minister, trained to be a sacred presence outside the conventions of traditional religion. As a musician, spiritual mentor and worship leader he incorporates chant, ritual, poetry, storytelling, and mindful practice to create a space for profound connection and sacred witness.

Simon is an accomplished musician and songwriter with 20 years of experience as a performer. Originally a folk musician, he still very occasionally tours in Australia, Canada, and Scotland, as well as the US.

For the last 14 years, though, Simon’s focus and calling has been in sacred music. This grew out of his work at Iona Abbey, and has since led him to provide music for worship, ceremony, and prayer in a wide variety of churches and non-religious spiritual communities. He particularly loves to create music for meditation, healing services, and rites of passage.

Simon is currently serving as a bridge pastor for Suquamish United Church of Christ in Washington State.   He’s also a youth mentor, a maker of sacred objects, and a YouTuber. He considers his livestream channel and online community worship services to be among his most creative and vibrant musical offerings.

You can find out more about Simon and hear his music at SimondeVoil.com

The Magnificat is available on both the Pre-paid CD or get the digital download now at SimondeVoil.com/music

Until August 25% of all CD sales will be donated to Covid relief.