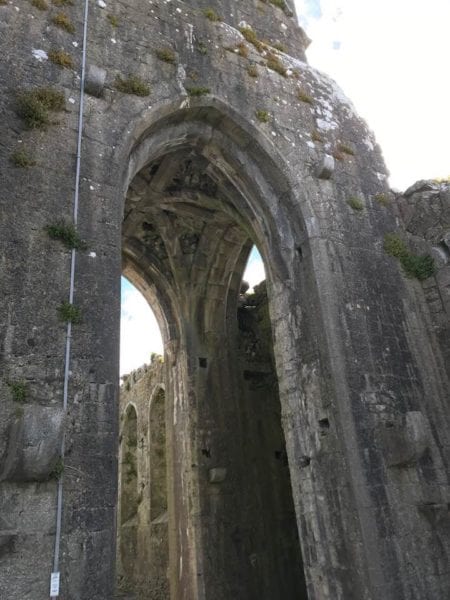 On my first trip to Ireland in 2007 with my husband John, I read Thomas Cahill’s now-classic book How the Irish Saved Civilization, in which he describes the essential role of the Irish monks and their work on illuminating manuscripts during the Dark Ages. I was captivated especially by the idea that Ireland was outside the Roman Empire and a form of Christianity developed early on that was more indigenous and localized.

Because Christianity was introduced into Ireland without violence, it also preserved older traditions and practices of the pagan culture and the Druids. Eventually, Irish Christians found themselves in conflict with the Roman church around such issues as the date of Easter and how to wear the tonsure (monks’ haircut). By the later middle ages, Rome had brought conformity to these practices, but there was a rich period from about the 5th until the 11th centuries when Christianity flourished in a way that seemed to be more earth-honoring and connected to the landscape. We call this period Celtic Christianity.

In 2012, John and I felt called to move to Europe. It was the unfolding of a whole confluence of events that led us first to Vienna, Austria, an ancestral place for me, and ultimately to Galway, Ireland where we have lived for the last eight years.

People often ask us how we ended up in Galway City, and largely it was an intuitive choice. We knew we didn’t want to be in Dublin, but we still wanted the convenience of a city. I loved the idea of living by the Atlantic, on the western edge of Ireland, on the western fringe of Europe. The image of the wild edges called to me. We also knew it had a reputation for being a center for the arts. Both of these factors sparked our imaginations, so that was enough to draw us.

When we moved to Galway I knew that Ireland had been a thriving community of monks for centuries, but I had no idea just how saturated the landscape was with the ruins of these ancient monasteries. Within an hour’s drive of us are dozens of sacred sites. Despite the buildings being “ruins”, we were entranced by these places. The roofs were gone from many of them, opening them up to the sky and the elements of creation. Holy wells were still places people came to seek healing. The stillness found at these locations opened us up to a beautiful sense of sacred presence where we could feel all those who had prayed in these places for hundreds of years prior.

Place is a vital concept in the Celtic imagination. Certain places can be called “thin” where we experience the nearness of heaven and earth to one another. In the Celtic worldview, there is a veil between this world and the Otherworld, and when the veil is thin, we sense the presence of the ancestors and the angels more closely. We are able to encounter the divine in all things.

Physical matter pointed toward the sacred, incarnation was a living and breathing concept felt most keenly in creation among trees and mountains, oceans and rivers. Ninth century Irish theologian John Scotus Eriugena taught that there are indeed two books of revelation – the book of the scriptures and the book of creation. The first is physically small, the second is vast. Both are required to know the fullness of the divine presence. Just as the divine can speak through the words of the scriptures, so can we hear the voice of the sacred presence in the elements, the creatures, and the land.

Therefore the landscape can become a theophany, or place of divine manifestation. The shoreline is a living threshold, the mountain lifts us toward the heavens. The monks sought out places in the wilderness to receive this gift of revelation. The hermitage was a new Eden, a place where the promise of paradise could be tasted in this world.

The Celtic monks saw that all of creation is continually offering praise to God, as Psalm 104 describes. The great and powerful sea, the wide sky, the creatures, the sacred trees, the force of wind and rain, are all seen as participating in a liturgy of praise, which our own worship joins.

When we awaken to the holy shimmering in each flower, tree, and bird, we suddenly discover that we are woven into a vast community. We find ourselves nourished and supported in ways we didn’t see before. We are called to hold this deepening awareness and trust that we are sustained and called forth by the choirs of creation into our own creative journeys of expression.

The Celtic imagination moves in circles and spirals; values dreams and visions; sees animals as wise guides; and gives reverence to Earth, her seasons, and land as wisdom guides. Living in Ireland has broken open my own creativity in new ways and has affirmed my own inner sense that the creative process is best nourished by letting go of our goals and opening our hearts to what wants to arrive each moment.

Join me for The Spiral Way: Celtic Spirituality and the Creative Imagination – a 4-session program hosted by the Rowe Center February 1-22, 2021. We will dive into the Celtic imagination through story, poetry, writing exploration, music, conversation, and teaching.