I am delighted to share another beautiful submission to the Monk in the World guest post series from the community. Read on for Cathy Warner’s reflection “Two and a Half Horsepower Zen.”

A few months ago I ran an extension cord across the backyard, plugged in my mini-wood chipper, dragged downed limbs and small dead trees into a pile, stood in a sunny spot, and fed branches one at a time into the hopper where a whirling blade chipped, shaved, bit, and spit the cedar, rhododendron, and maple into a heap of garden muesli.

Often when gardening or cleaning house, I listen to audiobooks trying to squeeze literature into my chores. The chipper was loud and I didn’t want to scavenge for my noise-cancelling headphones, so in the words of James Taylor’s “Millworker,” it was “me and my machine for the rest of the morning, the rest of the afternoon,” and for the next few days since my husband was out of town. Like the millworker in the song, I found that running the chipper wasn’t easy or hard. But it also wasn’t boring.

The more I used the chipper, the more familiar I became with its operation—straight well-dried branches no more than an inch thick buzzed through easily. Berry canes and green leaves caught in the blade cutting the motor out, and I had to disassemble the feeder, empty it, and start over. Rhododendrons were tricky, too, and I squeezed their forked branches together, feeding with just enough pressure to hear the blade whine and prevent the ends from tumbling in the hopper like the last kernels of un-popped corn.

It was rewarding, making a dent in the nursery graveyard. I didn’t begrudge the former owner’s mess. He was almost ninety when he moved out and tending half an acre is hard work.

Warmed by the sun, surrounded by living cedars and pine, mulching dead trees, I developed a rhythm as I lifted a branch, fed it to the machine, listened for the cadence of the shredding wheel, and repeated the motions until there was nothing else in the world. Just me, my machine, and the material I fed it—a loop of action and energy—the distinctions between plant, human, and machine hazy and unimportant. I lost track of time and place. I wasn’t thinking about how many branches were left in my pile and when I’d have to drag more over. I wasn’t thinking about lunch or calling my husband later. I was simply and fully in the present moment.

I don’t know how long I was in that frame of non-mind. I only recognized I’d been in it when my ego drifted back into consciousness, and I thought, “Wow, I was really in the zone.” As soon as I thought about being in that zone, it evaporated. Thoughts came crashing back like breakers on a beach, a tidal onslaught that wouldn’t stop. I thought about how cool my Zen moment was, how it felt like when I am truly able to surrender myself to prayer, eyes closed, holding the hand of my prayer partner, the ticking of her grandfather clock heralding a holy presence waiting to enter at the slightest invitation.

This was the first time I was transported by physical labor and I thought that losing track of time and space must be what happened to my husband all those nights he was late for dinner because of a home improvement project. And I thought about how understanding I would be now that I’d shared his experience. And, since I was blogging about our move to this fixer-upper, I thought that I should blog about the spiritual side of home improvement.

As responses to the wonder of my woodchipping Zen whipped through my mind, my attention to both machine and body waned. The motor screeched as branches tangled and stuck in the hopper. I yanked at them and felt an angry twang and twinge of muscles across my back.

My inattention sidelined me for days as I alternated between ice pack and heating pad, unable to work or even blog. But in those days of moving gingerly and negotiating pain, I often found myself in the Zen-like consciousness both the woodchipper and prayer evoked. I floated in a whittled down world that consisted only of body and breath—a world that contained nothing but the moment and the opportunity to practice stillness within that blessed moment. 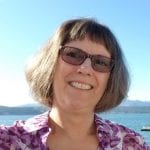 Cathy Warner is a writer, editor, teacher, home renovator, and realtor who lives alongside Washington’s Hood Canal. Author of two books of poetry Home By Another Road, and Burnt Offerings, her fiction, short memoir, and essays have appeared in dozens of print and online journals. Find her at CathyWarner.com.