St. Gobnait and the Place of Her Resurrection (new poem video) ~ A Love Note from Your Online Abbess

St. Gobnait and the Place of Her Resurrection

On the tiny limestone island
an angel buzzes to Gobnait
in a dream, disrupts her plans,
sends her in search of nine white deer.

she falls gently to wet ground,
sits in silence as light crawls across sky,
lets their long legs approach
and their soft, curious noses surround her.

Breathing slowly, she slides back
onto grass and clover and knows
nothing surpasses this moment,
a heaven of hooves and dew.

Is there a place for each of us,
where we no longer yearn to be elsewhere?
Where our work is to simply soften,
wait, and pay close attention?

She smiles as bees gather eagerly
around her too, wings humming softly
as they collect essence of wildflowers,
transmuting labor into gold.

When I moved to Ireland I was familiar with some of the saints like Brigid, Patrick, and Kevin. One of the true delights of living here is being introduced to the many holy figures who lived on this land, who sought the sacred, and worked to serve others.

One of the saints who has most captured my imagination is St. Gobnait. I have been to the two holy sites dedicated to her, one is a tiny stone chapel on the island of Inisheer where she first lived as a hermit. Then later she was called by a dream to seek the place of the nine white deer and create a monastery there. This place is in Ballyvourney, County Cork and is another beautiful site with a huge statues of Gobnait, old stone church buildings, a grave purported to be of her remains, and a holy well. Her story brings together some of what I love about the Celtic tradition – the way that dreams are honored as a sign from God, a call to something new, and the way that animals are considered to be signs of the sacred presence – dreams, signs, symbols, nature, animals all play a significant role in how the early Celtic monks discerned their callings. Gobnait is also the patron saint of bees, another lovely connection as honey has strong healing properties and evokes the sweetness of life.

Soon after I wrote the poem above, I came to know of a wonderful musician named Simon de Voil, who is originally from Scotland and spent time on Iona, and now lives in Port Townsend, WA, not too far from where I lived in Seattle. I fell in love with many of his songs – versions of Deep Peace (based on an old Celtic blessing), Be Still (that amazing psalm), and the Prayer of St. Francis. I shared with him some of my poems to see if he might be inspired to write a song based on one of them. It was a new experiment for me in collaboration with a musician. He was inspired by Gobnait’s story as well, felt a strong kinship to the deer which called to her, and ended up writing a song based on my poem.

I love this song because it takes me on an inward journey through the poem’s story in a way that just reading it doesn’t seem to capture. Then as we moved into this poem video series I knew I wanted this song included.

I invite you to read over the poem slowly, let the story find a place within you to settle. Then play the video below, you could close your eyes and just listen to the song itself at first, and then play it again, this time taking in the images. If the images don’t work for you, stay with what does. This is all a creative experiment! I am so grateful for the many artists with whom I get to work and play. 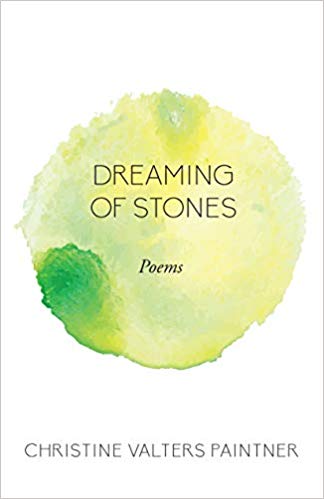 My collection of poems, Dreaming of Stones, was published this week in the U.S. (coming to other countries very soon!) If you go to this link you can find different ways of ordering a copy for yourself. I would be most grateful for and honored by your support.