Writing on the Wild Edges:
Participant Poems from Michael Philley

At the end of August, 17 creative souls gathered with us for our retreat on Inismor – Writing on the Wild Edges of the World. We had a wonderful group with participants from all over the U.S., Canada, Singapore, and Australia. I am delighted to share some of their poems over these next few weeks. Pour a cup of tea, imagine yourself on a windswept limestone island in the Atlantic, and savor for a while.

These haiku were written by Mike Philley:

winged peregrine
soaring above the sea cliff
the wind its muse

at the holy well—
a gnarled rag tree, steadfast
altar of blessings

gravestones of ancestors—
names lost, weathered away
all facing the sea

the labyrinth twists
through a field of rabbit holes
ever opening

two women talking
in Irish, their Gaelic tongue—
one stirring the soup 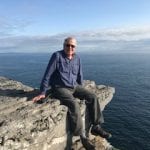 Michael Philley, retired from government service, now lives with his wife, Sue, in Boise, Idaho. Several of his short stories appear in Writers in the Attic, a literary anthology. To spur his imagination, he also reads and writes haiku poetry. On a recent pilgrimage to Inismor with Abbey of the Arts, he wrote haiku expressing the island’s ancient rhythms and still abundant traditions of Celtic spirituality.