Feast of Dorothy Day ~ A Love Note from Your Online Abbess 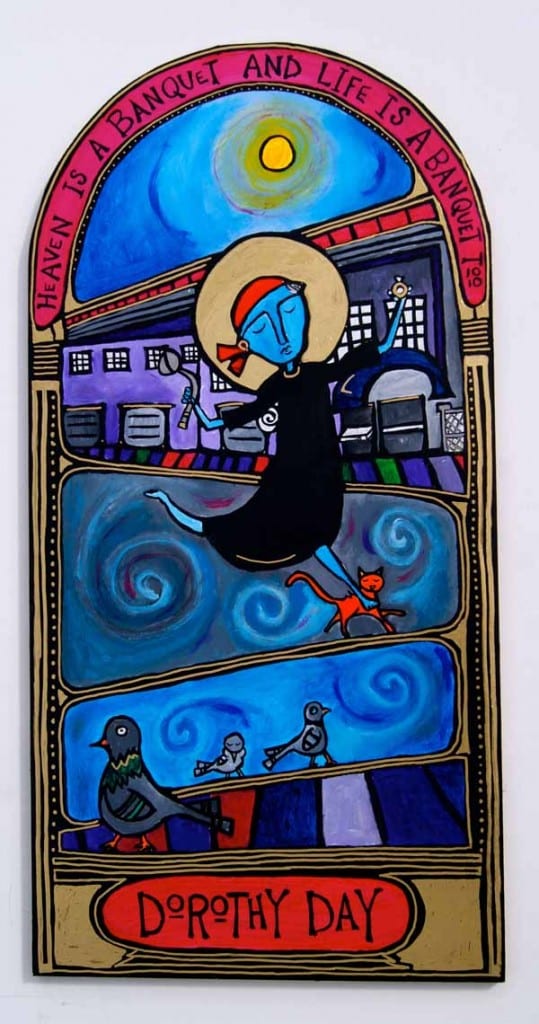 On Thursday is the feast of Dorothy Day, so I share with you this excerpt from my book Illuminating the Way: Embracing the Wisdom of Monks and Mystics about her:

In an editorial, she described the mission of the Catholic Worker she helped to found: “For those who are sitting on park benches in the warm spring sunlight. For those who are huddling in shelters trying to escape the rain. For those who are walking the streets in the all but futile search for work. For those who think that there is no hope for the future, no recognition of their plight—this little paper is addressed.”

She would describe the writing of her regular column as a letter to friends and “an act of community,” a reaching out to others who shared the same values and principles. She eventually called her column “On Pilgrimage” to reflect her sense of always journeying.

Dorothy Day was very much committed to those who were “outcasts” and on the fringes of society. She loved the widow and the orphan. She was passionate about the corporal works of mercy: feeding the hungry, sheltering those without homes, providing clothes for the naked. She was always trying to see Christ in “the poor lost ones, the abandoned ones, the sick, the crazed, the solitary human beings whom Christ so loved, in whom I see, with a terrible anguish, the body of this death.”

Soon after the newspaper began Peter and Dorothy opened a soup kitchen and homeless shelter, and Peter Maurin challenged bishops to open “houses of hospitality” in every diocese, to live out the message of the gospel. As the number of houses grew they were open to everyone. Dorothy resisted creating a formal rule of life, she saw it as more of a family, often with the chaos that comes from many people in great need living together.

To sustain herself, she attended daily mass and prayed the monastic Hours. She was also a Benedictine Oblate at St. Procopius Abbey in Lisle, IL and often went there on retreat. Dorothy Day’s spirituality was very earthy, finding the sacred in the most ordinary of moments and encounters. She saw the sacraments as sustaining her in this life she chose so freely. Her faith is rooted in reaching out to the needs of others and she was sustained by regular prayer and worship. Yet, she often came into conflict with the Church over her activities.

Dorothy’s favorite saint was Therese of Lisieux, the “Little Flower” who died the same year Dorothy was born. Dorothy was very drawn to Therese’s “little way” of infusing all daily activities with a prayerful awareness and intention, and a spirit of love. She loved the phrase “duty of delight” which comes from nineteenth century critic John Ruskin. She repeated it often as a reminder to herself to find beauty in the midst of every moment.

Dorothy Day died on November 29, 1980. Although she famously said, “Don’t call me a saint. I don’t want to be dismissed so easily,” the Church has begun the canonization process.