Feast of St. Kevin of Glendalough ~ A Love Note from Your Online Abbess 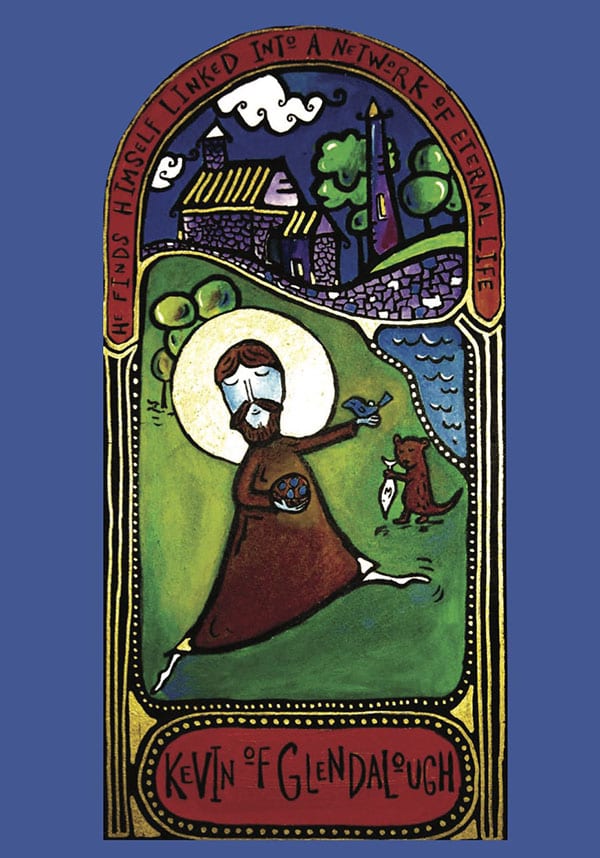 St Kevin’s feast day is today and the story of St. Kevin and the Blackbird is another one of my favorites of all the stories about Celtic saints. Here is an excerpt from my forthcoming book The Soul’s Slow Ripening: 12 Celtic Practices for Seekers of the Sacred (due out from Ave Maria Press in September):

Kevin was a sixth-century monk and abbot who was a soul friend to many, including Ciaran of Clonmacnoise. After he was ordained, he retreated to a place of solitude, most likely near the Upper Lake at Glendalough, where there is a place called “St. Kevin’s bed.”

He lived there as a hermit for seven years, sleeping on stone and eating very simply: only nuts, herbs, and water. In the writings of his life, it is said that all of creation would sing to him. Kevin is known for his intimacy with nature and animals. It is said that when he was an infant and a young child, a white cow used to come to offer him milk. Later, after he founded his community, an otter would bring salmon from the lake for him to eat.

One of the most well-known stories about him tells that he would pray every day in a small hut, with arms outstretched. The hut was so small, though, that one arm reached out the window. One day, a blackbird landed in his palm and slowly built a nest there. Kevin realized what was happening and knew that he could not pull his hand back with this new life being hatched on it. So he spent however many days it took for the eggs to be laid, the tiny birds to hatch, and the fledglings to ready themselves to fly away with his hand outstretched.

I love this story because it evokes such an image of yielding, of surrendering to something that was “not in the plans” and receiving it as gift. Instead of sitting there in agony trying to figure out how to move the bird, he enters into this moment with great love and hospitality.

How many times in our lives do we reach out our hands for a particular purpose, and something else arrives? It is something that may cause discomfort, something we may want to pull away from, but in our wiser moments we know that this is a holy gift we are invited to receive.

There are stories of St. Columbanus, during his periods of fasting and prayer in places of solitude, calling the creatures to himself, and they running eagerly toward him. Esther de Waal says, “He would summon a squirrel from the tree tops and let it climb all over him, and from time to time its head might be seen peeping through the folds of his robes.” Animals such as bears and wolves, normally feared and hunted, were shown warmth and kindness and responded with mutual respect.

Celtic tradition is full of legends about kinship and intimacy between monks and the wild animals of the forests where they lived. Sometimes the creatures were the ones to lead hermits to their places of prayer and solitude. De Waal tells of St. Brynach, who had a dream in which an angel told him to go along the bank of the river until he saw “a wild white sow with white piglings,” and they would show him the spot for his hermitage. Often the animal that would show the monk his or her cell would stay on as a companion, the two sharing life together.

This is our call in soul friendship as well, to learn how to yield our own agendas and egos and allow ourselves to be vulnerable and transparent in front of another. To show our shadow and tender places, to seek growth knowing that what is kept hidden only festers. When speaking with a soul friend, keep in mind this open-palmed approach to life, not needing to hold too tightly to your own façade or the persona you present in life.