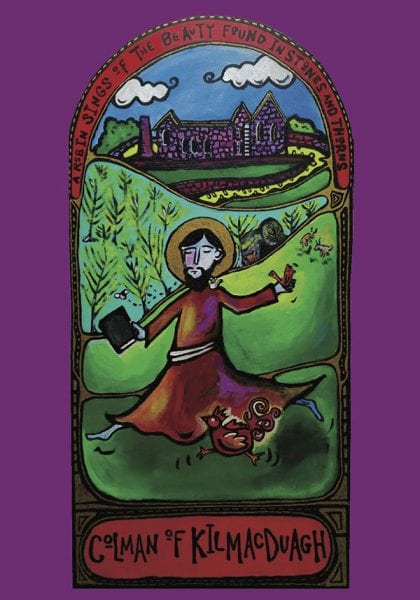 St. Colman lived in the 6th-7th centuries in County Galway in the west of Ireland. His parents were king and queen of that region, and while his mother was pregnant, his father heard a prophecy that his newborn son would one day surpass him in notoriety. In a jealous rage he had his servants throw his wife into the lake with a stone tied to her. But in a miracle, the stone floated like a cork, and so she was brought safely to shore.

Once she gave birth, two priest pilgrims wandered by and she asked them to baptize Colman. A fountain began to gush from under an ash tree so that they would have water for the rite. Because her son was still in danger from the king, she asks the two old monks to care for him.

When he grew older, he went to spend time on the holy island of Inismor, one of the Aran Islands which was a center for monastic learning and spirituality. Other well-known saints who had spent time there were St Brendan, St Ciaran, and St. Enda.

After founding two churches there, he longs for greater solitude and silence. He goes into the forest of the Burren and finds a cave where he can settle. You can still visit his cave, oratory, and holy well today and it is a very beautiful site. When we bring pilgrims there, we bless ourselves at the well and spend time sitting in silence ourselves to listen to the wisdom of wind and stone, of trees and water.

It is said that Colman also brought three creatures with him – a rooster, a mouse, and a fly. The rooster would wake him for his morning prayers. The mouse would nibble on his ear if he fell back to sleep, and the fly would help him keep his place in his book of prayers.

He lives in this dysert place for seven years in silent contemplation, allowing the wilderness to teach him. Finally, through divine intervention, he is called back to community life when he builds his monastery Kilmacduagh (means “church of Macduagh”), near Gort. It became a large ecclesiastical site with many pilgrims seeking it out.