I am delighted to share another beautiful submission to the Monk in the World guest post series from the community. Read on for Kristen Vincent’s reflection on prayer beads and the mystery of God. 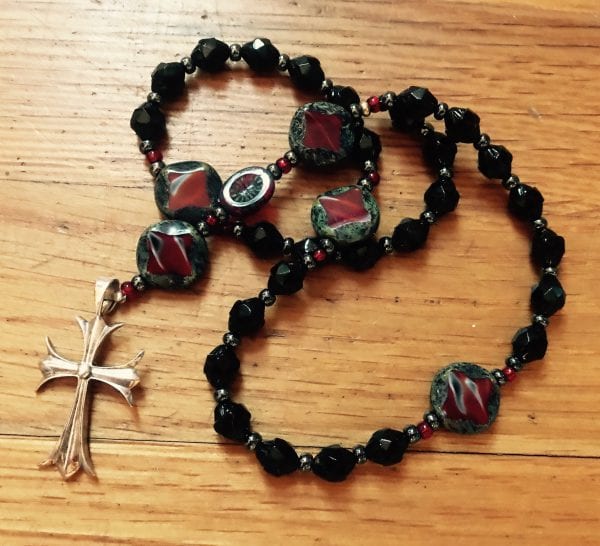 Last year my friend Thayer gifted me with a set of prayer beads. It could have been an ironic gift given that I make prayer beads for a living; it’s not as if I was in need of a set. Instead, the gift was deeply touching. Clearly, Thayer wanted to make a set of beads for me and was confident enough to give them to me. I loved that. The beads were gorgeous: shiny black Czech glass week beads paired with red and black cruciform beads, set off by red and metallic seed beads and a silver pewter cross. Thayer chose black, she explained, to represent the Mystery of God.

Her timing was perfect. A year or two earlier I might not have received this gift of black prayer beads well. As the survivor of childhood trauma, blackness represented the dark, death, a place where scary things happened. Bedtime was particularly difficult; turning off the lights created space for intrusive thoughts and even night terrors. And the idea of mystery was discomforting: it was the unknown, a place in which anything could happen, a void where you could get lost or even lose yourself.

That God was described as Mystery did not help. Why had God allowed me to be traumatized as a child? Where had God been? Why hadn’t God protected me? And where was God now in the midst of my fear? Why did God seem so distant in the dark? To me, that was the mystery.

In 2009 I began praying a desperate prayer for peace. Over time I was led to enroll in The Academy for Spiritual Formation, a two-year program that combines academic learning with spiritual disciplines and community. The Academy is modeled on a monastic rhythm of prayer, worship, community, silence, and solitude. This rhythm created the space I needed to heal. For the first time I was still enough to hear God’s voice. I recognized that God had never abandoned me all those years ago; indeed, God was with me every second, giving me the strength to endure the trauma and cope with its aftermath. God had carried me until I was ready to heal. And God was now present to hear me speak my truth, ask my hard questions, rage and cry and vent, then carefully begin to piece together a new sense of self that was based in God’s Deep Love.

Not surprisingly, it was around this time the darkness began to lose its sense of danger. The night terrors faded away. I could sleep.

Then Thayer gave me this beautiful set of prayer beads, black to represent the Mystery of God.  Thayer – who knew my story and had watched me heal – somehow understood that I was ready to experience God’s Mystery in a new way. And she was right. Because it was only when she offered that gift of black prayer beads and explained the meaning of the color that I felt God’s Mystery. I felt its depth, its power, its richness, and its grace. I felt its triumph and its humility. Most of all, I felt its abiding peace.

Now I look forward to bedtime. I turn out the lights, put on an eye mask, then cover my head with blankets to block out all hope of light. I purposely look deep into the blackness. I don’t see anything. I don’t hear anything. Best of all, I don’t have to do anything. I can just be. It is “i am” with “I AM.” I can rest – really rest – and know that God is with me and in control. There’s no need to be on guard against anything. I can relax and release my entire being to Mystery.

I have taken this same sense of rest and release into the day. Using Christine Valters Paintner’s suggestion, I received a seven-word prayer at the beginning of the year: “Help me release and receive your peace.” I sit with my black set of prayer beads, close my eyes, and repeat this prayer with each bead. I do this until I begin to feel it: that sense of release, that rest, that peace. That is how I’m learning to live in Mystery surrounded by God’s deep love. 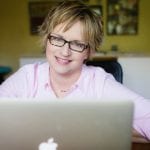 Kristen Vincent is author of several books on prayer and prayer beads, including A Bead and a Prayer: A Beginner’s Guide to Protestant Prayer Beads, and Beads of Healing: Prayer, Trauma, and Spiritual Wholeness. Kristen is a graduate of Duke Divinity School and The Academy of Spiritual Formation (#34) and loves to write and lead retreats.  Visit her online at www.prayerworksstudio.com and www.beadsofhealing.com.