I am delighted  to share another beautiful submission for the Monk in the World guest post series. Read on for Ray Tetz’s reflection, “Here We Go.“

The rather elderly couple in line behind me were worried about being in the right line. After listening for a few minutes, I turned and suggested that since he uses a cane, he could probably pre-board, and avoid the line entirely.

“I hate doing that,” he said. “Like getting the senior discount, it’s a little bit embarrassing.”

“Nah,” I said. “It will be so much easier for you. And believe me, every person in this line is trying to figure out how to get on that plane first. Just go for it. (And those senior discounts are great.)”

He mustered the smallest possible smile. His wife grabbed her bag and headed towards the pre-boards. He looked at me with something like resignation. “Here we go,” he said.

Here we go, indeed. There is an Australian couple just one row in front of me that don’t much like flying. I know they are Australian because of their accents and his teeshirt. I know they don’t like flying because of their hushed and worried conversation that is clearly about the airplane and the safety card. The man just got a small stuffed Winnie the Pooh wearing a safari hat out of his carry on and has stuffed it into the seat pocket so the Winnie’s head and hat are sticking out looking at him. He has finally settled back in his seat and is looking intently at the little Winnie. “Here we go,” I want to say. “Just ask that guy over there with the cane in the overhead who is adjusting his hearing aid. He knows all about it.”

There’s a woman traveling by herself worried about her suitcase. She’s trying to rearrange all the other bags in the overhead bins so there will be room for hers. A man with a slightly pained expression has stood up to help her. He’s still wearing his coat and tie, all buttoned up and neat, and has suddenly been transformed from a seriously preoccupied road warrior to a skyhop. He’s pushing the stuff all around, trying to make room, she is directing his every move. Ah, he’s done it—the overhead door closes. His pained expression has given way to a grim little smile of satisfaction. And he’s made a friend for life—or at least the rest of this flight. They are talking now, and he’s got his phone out showing her pictures of his grandkids. She’s leaning forward to see them, her smile is genuine. Here we go.

There are only two empty seats on this plane, and one of them is next to me. I feel very fortunate. The woman in the aisle is very pleased as well, and has started to array her possessions for easy access in the half of the seat closest to her. She looks at me briefly to see if that’s a problem. I smile just enough so she knows that I think we are both lucky. Here we go. It’s alright.

I have my earbuds in, and I’m looking out over the wing at the clouds and the Arizona desert below us. I’m ignoring the folder of work I optimistically brought along. It’s Friday, and I don’t feel much like working. Perhaps I’ll just look out the window. Or write a little. The light coming through the window is almost white, and reflects off of my hands resting on the tray-table. My fingers shine, too.

I gather the unexpected sanctuary that this seat has become around me, and even the steady hum of the engine seems far away. “Here we go,” I repeat to myself, “We go.”

I like to imagine that everyone on this plane is going home to someone they love. Or perhaps they are off on a great adventure they’ve been planning for years. There must be some very important reasons they all got up this morning and got on this plane. I don’t really want to know all of them, not right now. I’ve got my music on shuffle, and Neko Case is singing that old Harry Nilsson song, “Don’t Forget Me,” the one he recorded one drunken weekend with John Lennon. They’re both gone now, but the song is still here. That’s a little sad.

But I’m still here. I’ve got a window in the exit row, and an empty seat beside me. A book half-read and time to reflect.  How cool is that?

By habit I fold my hands and lower my head, and from the corner of my eye I see my seatmate softly smiling. Not at me, particularly. Perhaps she has also found her sanctuary. She takes a long drink from her water bottle and leans her head back against the seat, silently closing her eyes. I go back to my book.

I hope everyone on this plane is going home. Because here we go. 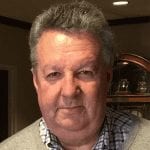 Ray Tetz has been a pastor, teacher, and writer. For 40+ years he has worked with faith-based organizations to communicate their mission and vision to the communities they serve. He lives in Thousand Oaks, California.