I am delighted to share another beautiful submission for the Monk in the World guest post series from the community. Read on for Gina Marie Mammano‘s reflection “Mount Shasta Monk.” 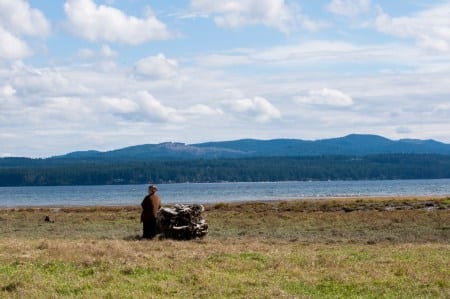 I was in the Mount Shasta area, at the tip top of California at a place called McCloud Falls. I have sailed by Mount Shasta many times as I venture from my current home here on Whidbey Island to my longtime childhood home in California. Through thick panes of tempered glass, I always acknowledge the towering sacred site, called “Acu Tek” by one of the native populations there. I always, as someone once said, “take a long, loving look at the real,” but seldom take the time to step into it.

This time, though, as I chose to step out of my hermetically sealed, air-conditioned, brightly painted tin can with four wheels, I realized something by the end of the day. Something that was true for me, and possibly true for you as well- that there is more than one way we can potentially experience a place. I created four categories for myself.

The first one is the least interactive- just passing by. The world is now suddenly in your rear view mirror. Wow! There goes Mount Shasta- wasn’t that beautiful?!

The second one . . . passing through. You’ve stretched your legs, taken in some fresh air, and actually stopped for a few minutes. But that’s about all.

The third one . . .  capturing a fleeting memory. This one’s purpose is to mark a moment in time. To remember. To have vivid proof that you were there. Oftentimes it includes bringing along a camera or a smart phone to create a photographic memory.

But the fourth, and I believe, the most rewarding opportunity, is making friends with the landscape.

As I approached the Upper Falls at McCloud that day in early summer, I realized that what I really wanted was to get to know it, not merely snap a picture of it or saunter quickly through it. And before getting to know it, I really wanted to be thankful for it- to appreciate what about that place makes it so unique and special in its own way.

So, checking around me to make sure I was alone, I began to sing the song that tends to emerge from me when I want to feel I am a part of a place, to bless it and to bless myself. A song I’ve taken with me along the bubbling, burbling Quinnault River in Olympic National Park, to a weathered bench near the high ridges of a cliff on Orcas Island, and to the ribbon of watery pathway on the Colorado River between Arizona and Nevada. The words go like this: Deep peace of the running wave to you. Deep peace of the flowing air to you. Deep peace of the shining stars to you. Deep peace of the quiet earth to you. After quietly, gently singing the words through a few times, this time, in this place at McCloud falls, I was feeling more grounded, more appreciative, more here.

I spent a few moments after that, enjoying the silence . . . settling myself into myself and the place where I found myself.

Wanting to remain inside of that place of gratitude and Presence, I then thought of another song that I could sing to the landscape to show appreciation. I wanted this moment to continue to unfold. I wanted to give it time, just like I would an intriguing person I just met, or an old friend.

I didn’t always choose to sing to every magnificent “new friend” that day in early June – to the natural features that opened themselves to my view. But, I found that the more times I stopped, looked, listened and thanked- whether I was sitting next to a waterfall, or a red plumed patch of Indian paintbrush, or a field of unknown bushes that somehow attracted glowing yellow butterflies lined with fractures of black- like flying stained glass windows, I was making friends. The landscape somehow gave me a piece of Itself, and I found I left a piece of myself there as well. An exchange of sorts. A getting to know, a getting to love.

I went from place to place that day, not merely passing by, or passing through, or even capturing a fleeting memory, but beginning the long, lovely process of making friends.

It was life changing.

The great and beloved African American botanist and inventor, George Washington Carver once said: “Anything will give up its secrets if you love it enough. Not only have I found that when I talk to the little flower or to the little peanut they will give up their secrets, but I have found that when I silently commune with people they give up their secrets also – if you love them enough.”

And this is my experience as well, as a newly robed monk in the natural world – love it enough, and you will get to know it in a way that you will never forget. That day I could walk away from McCloud falls and be able to say, “So beautiful to make your acquaintance; I’d love to get to know you more – I’ll be back!” 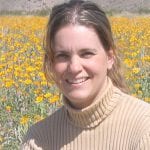 Gina Marie Mammano is a poet and author of Camino Divina – Walking the Divine Way: A Book of Moving Meditations with Likely and Unlikely Saints. She enjoys working as a spiritual director and retreat leader guiding people deeper into their own interior and exterior landscapes. She lives on Whidbey Island.