I am delighted to share another beautiful submission for the Monk in the World guest post series from the community. Read on for Monette Chilson’s reflection Back to the Garden.

I’d like to take you back to the garden. Back to Eden. There’s someone there you need to meet. Someone who has something to teach us all.

Her name is Lilith. I tell her story, in her own words, in my new book, My Name is Lilith, but I want to introduce her here. Why? Because her time has come. This world needs her now. We need to remember that the first God-created spark of womanhood—of femininity—was not an afterthought—was not meant simply to keep man company, to make his life easier, or to be his helpmate.

Let’s start at the very beginning—with Genesis, the sacred source of Judaism and Christianity  and home to the foundational creation story for all of us in the West. Regardless of our religious inclinations, our identities as men and women have been formed through a cultural lens that places Adam and Eve at the helm of humanity.

We first learn that humans were created in God’s own image—“Humankind was created as God’s reflection: in the divine image God created them; female and male, God made them.” (Genesis 1:27, The Inclusive Bible). Later, in Genesis 2, we hear another version of humanity’s origins, one in which man is created alone and is later joined by a woman, fashioned from his rib as a suitable helper for him.

Sit with the two versions. They elicit very different feelings and archetypal understandings of our origins. The first lends a feel of unification, of a cohesive humanity. The second a divisive, hierarchical understanding, the root of what will grow into patriarchy, a system that values maleness above femaleness and designates gender-based roles.

Ancient rabbinical writings meant to illuminate scripture through commentary (known as midrash), reconciled the two disparate versions, saying that there was a woman created before Eve, and that this woman—Lilith—fled the garden rather than sacrifice her God-created self to another.

The legend of Lilith grew, but not as a paragon of feminine strength or an example of remaining true to one’s core goodness. Instead, Lilith was demonized, very literally painted as a demon who stole the souls of babies. And for what? For daring to say “no” to subjugating herself, her gifts and the fullness of her humanity to another.

I’d like to reclaim her story here. And in that reclaiming, walk us through a contemplative exercise that will help us reconnect with lost parts of ourselves. People often ask me, “Is Lilith real? Is her story true?” And I answer, she’s real and it’s true in every way they need to be. She is an archetype—as is Eve—which, by definition, affects us in ways that go far beyond the intellectual realm. Rather than teaching us about something outside ourselves, they speak to who we are, molding us as we absorb them.

So, walk with me back into the garden paradise that was once our home. Breathe deeply and imagine yourself newly formed from clay, still marveling at this human body of yours. You feel yourself emerging. You take in sensations from all around you—the scent of new blossoms, the sounds of animals talking in a cacaphony of unfamiliar languages, the feel of the earth, now distinct from this human skin of yours. You are marveling at the discovery of all that is you and all that surrounds you. Everything is a novelty, including you.

You realize that you, unlike the animals, seem to have an intellectual ability. Neurons fire, and your brain awakens. You start formulating ideas and making plans to fulfill the purpose God placed you here to fulfill. You are excited to share them with your partner whose brain is also awakening and bubbling with activity.

When you run up excitedly to your partner, words spilling out, matching the speed of your whirring mind, your excitement is not matched. It is, in fact, doused—lovingly so, but doused all the same. Your partner doesn’t want to hear your ideas because he is under the impression that you are there as his assistant. He thinks you are here to do his bidding.

A pit forms in your stomach. It feels as though all of your enthusiasm has settled there, for it has nowhere to go now. You keep trying, day after day, but you get the same dismissive response. It feels as though who you are—who God created you to be—is being rejected, over and over again.

I wish this was an ancient tale that had no corollary to our experience as women today. But it is archetypal for a reason, because it reaches across time and space to touch us now with its wisdom. What I want you to hold onto is not the feeling as hopelessness, but one of hopefulness.

For God gave Lilith an ineffable word, one that was hers and hers alone. She was to use it if she needed God’s help. And, eventually, she was brave enough to utter it. She found her voice and she called out to God. It didn’t matter if the word she spoke made no sense to anyone else. She spoke her truth, and she was set free.

Are there places in your life where you are stuck? Places where you feel silenced? Carry this story of Lilith with you today. Not as a story that divides us—male against female—but as one that unites us and brings us comfort knowing God always gives us a way. A way to be the truest expression of ourselves and, in that, to reflect a bit of the divine back to the world. 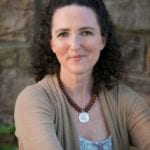 Monette Chilson is an award-winning writer who speaks, writes and blogs about the feminine in God and God in the feminine. My Name is Lilith, released last month by The Girl God, is her richly illustrated reimagining of the world’s first woman.