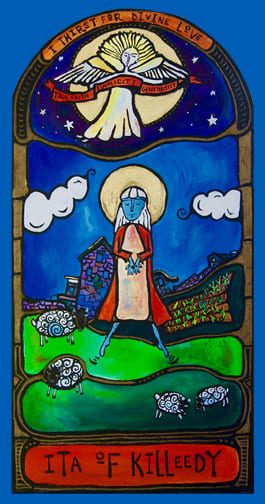 Today is the feast of Saint Ita.  She was a 6th century Irish saint and is the second most significant woman saint in Ireland after Brigid. Her hagiographer even called her a “second Brigid” and her name Ita means thirst.  She established a church in Limerick called Killeedy, which means Church of Ita.

When she was young she received a dream in which she was gifted three precious stones. She was unsure as to its meaning and pondered it. Later, in another visitation, it was revealed to her that throughout her life she would receive many dreams and visions, and the three stones represent the gifts of the Trinity coming to her. “Always in your sleep and vigils the angels of God and holy visions will come to you, for you are a temple of God, in body and soul.” I love this affirmation of the multitude which God is as well.

When she is older she prays for a place to found her monastery and is again shown her direction in a dream. She is told to leave her native land and come to a new place at the foot of a hill.

At the monastery she founded, many young people are sent her way for education and she becomes teacher to St. Brendan, who will later go on his great voyage. She tells her students to follow the “Rule of the Saints of Ireland” because she felt strongly about the Celtic value of soul friends, and saw those across the veil as guides as well.

St. Brendan once asked Ita what were the three things most pleasing and displeasing to God. She replied that what pleases God were “true faith in God with a pure heart, a simple life with a grateful spirit, and generosity inspired by charity.” What is most displeasing is “a mouth that hates people, a heart harboring resentments, and confidence in wealth.”

The multitudes are many. In addition to our own inner communion, God is a multitude of presences. The communion of saints offers us another multitude of wisdom and grace to draw upon. We can seek soul friendship from these guides just beyond the veil.

The Spiral Way:
Celtic Spirituality and the Creative Imagination


Journey with the Desert Mothers and Fathers
Retreat for Lent 2021