I am delighted to share another beautiful submission for the Monk in the World guest post series from the community. Read on for Naomi Kelly’s reflection on lessons from a contemplative walk:

“Earlier this summer, my friend and I embarked on a series of contemplative walks in the Adirondack mountains of Upstate New York that she called “Yoga Hikes.” While scoping out some new trails, we visited a small creek near Whetstone Gulf State Park.  At first, the creek’s wide banks were inviting us to walk along and enjoy the vegetation.  There were – birds feet, timothy and clover, the types of grass used by farmers in the planting of their hay.  Farther along there were all kinds of wild flowers, thriving even in early September, a time when most of the Adirondacks have already seen the first signs of Autumn. Among these, there were three kinds of wild asters, golden rod, and twisted stalk. It was like its own perfectly isolated Garden of Eden. The plants became fewer and fewer the longer we walked, replaced by strong lone plants, the seeds of which survived the spring flood by digging deep into the mud and finding enough nutrients to grow, flower, and to make more seeds. And it was good. 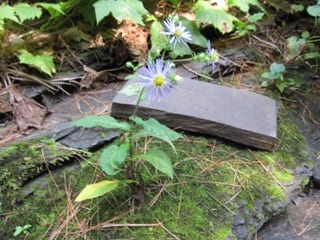 The rocks grew in size and splendor, manifesting all sorts of interesting colors and shapes. Some were smooth, having been rounded by the creek, some painted white with limestone, some jagged and sharp. Layers upon layers of shale looked as though they had been broken and shattered. Broken and shattered for you. And it was good.

As we continued on our slow, mediative pace, the banks of the river became narrower, as the waters had cut deeply into  the  layers of sedimentary rock. In the same vein, the  walls of rock become steeper, and with no bank to walk on we had to take off our shoes and walk in the creek. We felt the stones beneath our feet—the rounded and pointed ones we’d seen on the bank, but also stones slippery with algae and also minnows. Though we were lucky to spot a large snapping turtle basking on the rocks, none of us mistook his shell for a stepping stone. And that was very good.

The white bones of dead tree roots sat where they had been washed down in the spring. Bare but beautiful, their roots snaked around to create sculptures that would have been at home in any museum. The creek kept getting narrower with meanders and switch backs, deep and shallow pools. The banks became even steeper and higher, with a few pebbles falling here and there, disrupted from their high perch just by the wind’s smallest push. And it was very good. 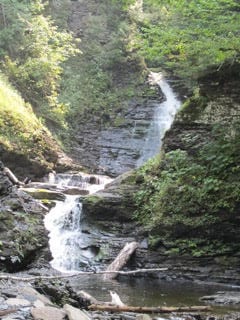 Each slow step, watching where our feet would touch, lifting and lowering, gently splashing, breathe in and breathe out. Was it around the next curve or the next? Expectation without anxiety, joy in each step, until around one more short curve in the high sided gorge, and we were there, standing before the falls, its sparkling water cascading down from a two-tiered rise, with the source of the falls not visible from where we stood. There was no way to climb up because the shale would have chipped away under your feet or cut them to bits. So we sat beside the pool and remained present, all  quiet, all  peace, a sacred place, a thin place, and we sat and breathed in the sparkling diamonds of air. And it was very, very good.

We watched the water dancing, swirling, falling. We ate rose mallow berries from the banks, ground cherries from our gardens, zucchini bread and oatmeal muffins. And it was deliciously good.

That’s when the sound of the jets started, the Air Force practicing maneuvers overhead, the loud and clear noise that funneled down into the gorge reminded us that we were not really in Eden, we were a part of a world who thinks that war solves problems, a part of a world where people die trying to leave their violence-torn homelands, a part of a world that thinks it can find the answer in their religious beliefs alone, a world where children die in violence, where disease and hunger rage. That can’t be good.

The sacred and the profane exist together in our world.  If I let the sadness and fear in, the profane distracts me from remembering even to breathe. But as a monk in the world, I feel called to affirm the sacred,  to make a difference for good, to breathe in the sacred and then exhale that healing and peace into a hurting world. And that is extremely good.” 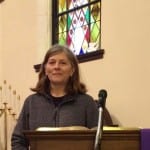 Naomi C. Kelly is a spiritual director and Presbyterian Pastor, and is embarking on a new retreat ministry called Weaving Home (www.weavinghome3.org) She lives in the Adirondack Park in upstate New York.