I am delighted to share another beautiful submission for the Monk in the World guest post series from the community. Read on for Monty Peregrine’s reflection on listening into silence.

My path as a monk in the world has literally taken me out into the world. I’m called by God and blessed to travel internationally several times a year, praying for and with the overlooked and neglected people of our world.  I’ve provided basic eye care for rural campesinos in a one-room, dirt-floored school in Honduras,  shared a midnight meal of freshly slaughtered goat, local cheese, yogurt, and melons with nomadic herders high in the Fann Mountains of Tajikistan,  prayed with an Ethiopian family in their round mud hut as the matriarch slowly roasted, hand-ground and then brewed coffee from family grown beans, shared early morning yak butter tea with Tibetan monks in their Himalayan monastery, listened to Bosniak Muslims share the heart-rending stories of violence and death during the siege of Sarajevo. 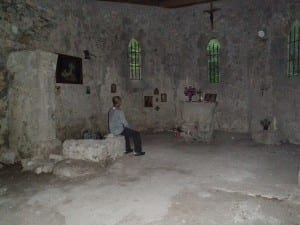 One aspect of my call is specifically to pray with and for people who live in areas that have been ravaged by war. To slowly, meditatively walk among them praying for peace and reconciliation. To bring healing words and prayers to deep, festering emotional and spiritual wounds. To see the real results of our wars, not the ‘talking heads’ version on CNN, Fox News, MSNBC, BBC or whichever slant you prefer. Some of these are old battlefields like the Walk of Peace trail in the Slovenian Alps where over one million men were killed in World War I.  Many are from conflicts during my lifetime – the Ho Chi Minh Trail in Vietnam and Laos, the Sandinista-Contra conflict during the 1980s in Central America, the violent, bloody struggle for control of Tajikistan after the Soviet breakup.  My pilgrimage into the world has also taken me into areas of current conflicts in Central Asia and the Middle East.

A few months ago my calling led me to hike a portion of Abraham’s Path through the country of Jordan. This pilgrimage was especially significant to me since Abraham is considered the father of my religion as well as the Jewish and Muslim faiths.  Although we are all ‘people of the Book’ sharing a common patriarch, like jealous siblings, our enmity fuels much of the violence in the world today. The birthplace of these three religions seemed a good place to walk and pray for peace within the family.  The blue United Nations tent camps of the Syrian refugees flooding into Jordan were a constant reminder of my call to prayer.

For several days we walked the same Jordanian foot paths that Abraham is reported to have walked thousands of years ago. We saw the very same mountains and deserts that he saw in millennia long past. Relatively little has changed for many of these people. We shared tea and prayers with Bedouin nomads who still live in goat hair tents driving their camels and goats from oasis to oasis.  We visited ancient stone dwellings which have housed the same families for century after century. Of all the unique experiences my friends and I shared that week one stands out above them all.

On this day our hike led us to some ancient Nabatean ruins in the remote Dana Nature Reserve. We had spent the last few hours pondering 2000-year-old high cliff waterworks and ritual sacrifice sites. I actually sat and prayed in the small caves of Nabatean hermits and monks. But the highlight of this whole experience came, as they often do, with a casual comment from Saleh, our Muslim guide who claims descent from the Nabateans.  As we walked along one of the ancient footpaths Saleh abruptly stopped, motioning for us to be quiet and still. I assumed he had spotted some elusive wildlife he wanted us to see, possibly a Syrian Serin or maybe a Nubian Ibex.  Or possibly a poisonous snake we needed to avoid! As we stood there silent and still for what seemed like an eternity Saleh finally turned to us smiling with joy and whispered, “Listen into this silence”. 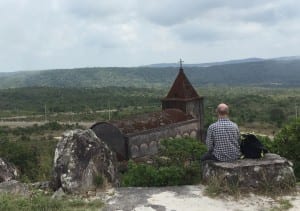 Monty Peregrine is a wandering pilgrim-monk whom Christ has called to pray among the nations.  He serves as a team leader and staff writer for Extreme Missionary Adventures (XMA) where he has led over 160 volunteer teams serving in 34 countries around our world.  You can find more of Monty’s musings at www.monasteryofthesoul.com.