I am delighted to share another beautiful submission for the Monk in the World guest post series from the community. Read on for Sherri Hansen’s reflection on composting as a spiritual practice.

[Jesus said,] “Very truly, I tell you, unless a grain of wheat falls into the earth and dies, it remains just a single grain; but if it dies, it bears much fruit”—John 12:24

Spring in Upper Midwest is highly welcomed after long months of cold dark nights and seemingly endless snow. As ice melts and the world becomes green, I never ceased to be amazed and grateful at this promise of rebirth. Like many gardeners, I am eager to get out in my beds and prepare for the new season. Gardening, for me is a spiritual and contemplative practice in being in the present moment. Each day brings the ritual of watering each plant, carefully pinching away spent buds, pulling errant weeds, and reveling in their fleeting beauty.

One of the most important parts of my garden is my compost pile. Compost builds biomass and adds nutrients to flower and vegetable beds. It also recycles compostable materials, keeping them out of rivers, lakes, and landfills. One of the many gardening tasks done each spring is to turn the now thawed compost pile to redistribute oxygen and moisture. This spring, as I raked and turned through the pile, I saw many fragments of flowers and vegetable matter caught betwixt and between the many stages of decomposition and I paused to consider the legacy it provided.

The compost pile seems full of dead foliage and long faded blooms, but it is a reservoir of memories of joy and happiness. It contains roses given to me on Valentine’s Day, irises given to me for my birthday, Christmas poinsettias and Easter lilies. In it are bouquets of flowers that graced my piano at the release concert to celebrate my first solo piano collection publication. The stems of basil plants, now blackened from frost, kept me well supplied for pesto throughout summer. Vegetable trimmings are souvenirs from home-cooked meals shared with friends. Peelings from bushels of apples, cucumbers and tomatoes testify to the work needed to create pickles and sauces to sustain through the long winter.

Yet there is sadness and regret in it, too. My compost contains flowers from relationships also dead and gone. In it are petals which bloomed “more brilliantly than Solomon in all his glory,” but were noticed only after faded from beauty. Brown, withered leaves abound from fleeting crimson autumn glory. Produce that was shoved to the back of the refrigerator and forgotten until spoiled reminds me to be more mindful of the amount I select to consume. The most painful reminder of death, however, were the flowers that once graced my mother’s casket and like we will one day, have returned to dust.

Yet numerous plants have sprouted from seeds to laid rest, often serendipitously. I discovered muskmelons in a flower bed one year and gently laid them to ripen in the summer sun of my sidewalk. I once noticed several unidentified plants from the squash family and was delighted when several varieties of winter squash appeared as well as giant orange pumpkins. For several seasons, plum tomatoes grew directly out of the bin, vines squeezing themselves out of the air vents and supplied all of my tomatoes for dehydrating.

In the Gospel of John, Christ says that one must die in order to gain new life. But death is not absolute. A seed dies and its outer coat decays to reveal new life within. But in order for that life to sprout and blossom, it must be nourished by the compost that once also began as seeds and now is recycled back to the earth. Joy and sadness mingle together to create life anew.

What is in my compost pile? Resurrection. 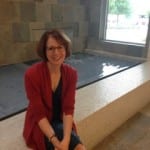 Sherri Hansen, MD, OblSB, is a psychiatrist in private practice, a Benedictine Oblate, a church musician and composer, and passionate gardener in Madison, Wisconsin. You can learn more about her and her music at: www.sherrihansencomposer.com