I am delighted to share another beautiful submission for the Monk in the World guest post series from the community. Read on for Valerie Holt’s wisdom on encountering her inner monk on the labyrinth:

A few years ago, I was on a sales trip to San Francisco, working at a convention center across the street from Grace Cathedral.  I was exhausted from my work and searching for a few moments of peace and quiet.  On the second day I stepped out of the convention center for some fresh air and caught sight of the cathedral set up on a hill, beckoning me to cross the street and clear my head.  A posted sign read there was an organ and choir performance that day, the perfect opportunity to decompress. 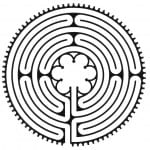 As I entered the cathedral, I realized I was too early for the performance and heard the organist practicing. The space was cool and dimly lit from nearby stained glass windows. I quietly circled the main space and returned to the entry when I finally looked down.  There at my feet, woven in simple variations of woolen dove grey was a huge labyrinth.  A nearby sign stated it was patterned after the labyrinth at Chartres Cathedral in France, which I had been to years earlier. The sign further described the labyrinth as a meditation tool.  It hinted at secrets of the walk and how levels of awareness were available to the devout practitioner.

I decided to take a ‘crash course’.  I mean how hard could it be to discover the secrets of this walk, it really was only a spiral into the center and right back out. All I had to do was watch my feet. It didn’t have walls, I couldn’t get lost—what could be so secret?  I slipped off my shoes, symbolic cares and worries of the outside world, and stepped barefoot onto the soft woolen carpet.  Quietly, rhythmically I walked the patterned path paying attention to any secret wisdom I might perceive.  My breath slowed, I forgot everything else. I noticed the tiniest things, the dust mites floating in angelic beams from the light of the windows, the now too many passers-by threatening my quietude, even the lilting notes of the organ and how I began to step in time to the music.  After several minutes of focused walking I made it to the center and got even quieter, I was waiting, waiting for the floods of insight, the secrets of the walk to pour forth—and nothing!  Not even a pin dropping. My cynical self was like, ‘whatever, this is such a marketing trick to get people in here!” and quickly wound my way back out—noticing much less and turning my attention to the work I had already been too long away from. (you’ll notice I still walked the path on the way out, not quite ready to give up on it, but not for one minute tricked by the promise of such easy magic) But I was hooked, the puzzle-solver in me—or maybe even the ‘seeker’ had been awakened.

My spiraling journey to center woke something up in me, and my focus shifted with the subtlety of Mary Poppin’s wind from the west. Without even knowing it I had started a quest to unearth what had been buried deep in me for what felt like my whole lifetime. I started to dig, to awaken the secrets promised, whispered, hinted at on that labyrinth walk. I had no clue where they might lead; I just felt a constant tugging to seek the answer.

I went about the business of life and encountered labyrinth experiences everywhere.  I returned to San Francisco and Grace Cathedral, took some workshops including a labyrinth walk, a friend of mine built one on her property, and I would go there often to get ‘lost’ in the walk.  I even got some friends of mine to tear out the weeds in the field behind my house and lay down a huge labyrinth I could walk whenever I wanted.

Here is what I learned from the slow and concerted effort to become an expert at the labyrinth—I know hilarious really, an expert walker, but let my mea culpa at my own ignorance assuage your harsh judgment of me, let’s laugh together at my silly self shall we?  I learned while inside the circle, slowly winding my way ever more into center, all I did was pay attention to that moment.  I noticed an ant hill rebuilt every time I came back around one of the turns, the way I stepped over the thistle pricklies rather than rip them out because the flowers were so pretty, the way I always stopped at the upper end of the curve to stare at the aspen trees, they were growing almost like a runway heading straight up to heaven.  I noticed if I had my headphones on all my self-consciousness floated away, and I was in a world all by myself dancing, rocking, floating my way from turn to turn.

I noticed the patterns of behavior I defaulted to in life, my choices in stepping, circling, engaging, passing, avoiding I would rather take and challenged myself to do something differently. OK, I won’t wipe the anthill out again, they aren’t hurting anyone really are they?  I will rip just one thistle out from the roots because darn it if I haven’t gotten a major sliver in my heel more times than I can remember because I stepped too eagerly over the rock behind it.  I will now lose myself in silence as much as I will in the isolation of the earphones and give up my self-conscious walk because I love how my feet beat on the earth as much as I love how they keep time to the beating of my music’s drum.            …And just like that, secrets are revealed.

It was practicing the walk, not thinking I was an expert, just a walker that set me free from the expectation of the heavens opening and choirs of angels revealing truths, and I started to learn the secrets of me.

Valerie Holt lives in Salt Lake City as a decidedly non-denominational practitioner of spirit, facilitator and author mentoring her clients at The Lama Farm  where her mantra is The soul of the seeker rises from the ground we break, Dig on Purpose™.