This week in our Monk in the World guest post series we have a reflection from fellow monk Lynn Domina. Read on for her wisdom on paying attention as a contemplative practice:

The Pleasure of Attention

Driving the route I ordinarily take from my home to the next town over, across a few hills and one mountain, around several curves always winding generally north, I pass thousands of trees. They all look alike, green in summer, red and orange in the fall, bare in winter. Many are conifers though, and so they do differ from the deciduous maple, oak, and ash. I called them all pine, even though I recognize the tree in the center of our backyard as a blue spruce and the tall narrow trees along our property line as some sort of cedar.

Then a while back, I noticed something peculiar. Along one stretch of the road, the long cones on most of the trees hung in clusters, like bunches of bananas. I enjoyed the paradox, the suggestion of tropical fruit as the days shortened and the temperature dropped in my northern climate. Then I noticed how the needles always drooped downward on these trees, like weary fingers. I learned that the name of this tree is Alaskan Weeping Cedar, and I enjoyed knowing that, for the only other weeping tree I knew was a willow. Now I see them more clearly. I see their distinctiveness, and so I also see the distinctiveness of the surrounding trees, the ones that are not Alaskan Weeping Cedars.

Some of them have branches that angle upward while the limbs of others slant downward. Their needles shade not only from light to dark but from the yellow edge of green to the blue edge. I enjoy noticing this, and so I begin to notice more. I promise myself to look at the trees as I pass by them each trip over the mountain. Some of the needles do look stiff and prickly, but others spread out from their branches, growing intricately like lace. I promise myself to see where I am rather than to hover inside the worries of the day, encased in my anxiety as fully as I am encased in my car.

While I am paying attention to the trees, I begin to notice other things also. Soon after the snow has melted, I see the short yellow flowers my friend had assured me would blossom at the edge of the field, colt’s foot. I notice that some of the wildflowers growing alongside my woodshed have petals that are actually a series of layered tinier petals, and I begin to leave the wildflowers be, growing among the perennials we’ve planted intentionally. I admit that some of them get a little too high, and some of their stems are a little bulky and their leaves are untidy, but their purple and white blossoms are so pleasant looking there among the green.

I begin to see more animals scuttling across the road too, not only squirrels and chipmunks, but a juvenile red fox and a baby woodchuck. Deer graze occasionally in cornfields, but they seem to prefer new mown hay. In early spring, they huddle together, a dozen or two nipping at the scant patches of grass, but by summer they spread themselves apart, eating leisurely. One day, a parade of geese paces off the circumference of a pond downhill from the deer, a mother and her young. The babies look like gray puffballs. They grow quickly but remain soft and downy for weeks. Then one day they’re adolescents, covered with feathers, half as large as their mother. I know that in a few more weeks, they’ll have flown off, somewhere south. When I drive by and look for them, they’ll be gone. I’ll feel a pang of loneliness. I feel that pang now, even as I remind myself that they’re still here, as am I.

This world—how abundant it is, how mystical. And I am part of it—the cedars, the spruce, the pine, the maple, the chipmunk, the geese, you, me. Giving the world attention requires active engagement, though it can seem so passive. Meditation, contemplation—they are experiences that urge me to enter creation rather than hold myself apart from it. Turning my attention outward, I receive reassurance, renew my confidence in the God who could imagine such variety into being.

Paying attention is a contemplative practice; it slows us down, requires us to move through our days at a more reverent pace. Paying attention helps us to incorporate a little bit of sabbath time into every day. Observing the trees, the wildflowers, the domesticated and undomesticated animals in all their variety reminds me of how much attention God has paid creation. In this pause, this interruption of time, I recognize myself as one held up by the gaze of God. 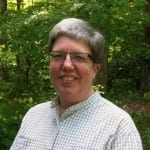 Lynn Domina is the author of two collections of poetry, Corporal Works and Framed in Silence, and the editor of Poets on the Psalms. She is a student at the Earlham School of Religion, where she takes courses in the Ministry of Writing and lives in the western Catskill region of New York.