This week in our Monk in the World guest post series we have a reflection from fellow monk James Sargent. Read on for his wisdom: 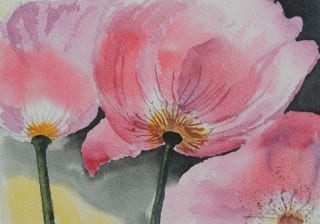 I was brought up in a Christian home.  For that I have always been truly thankful. To the age of about 40, I considered myself a committed believer, attending church spasmodically. As the years went by religion slipped out of my life until by the age of about 65, my attitude had hardened into radical atheism. ?Now at 84, I’m picking up the spiritual threads of my earlier years.  Two gifted and loving wives – now both passed on, have been blissful partners in my life’s journey. Looking inwardly, now at a not so spritely 84 years, I live comfortably in a bachelor flat. Three months on from Christine’s wonderful Lenten Pilgrimage, I confess to a rather ragged personal prayer life, plenty of silence (solitude) with patchy meditation, struggles with short term memory, regular eucharists, periods of doubt, plentiful magical moments, holding the tensions between.  My end of term report might say – ’Some progress; you need to be more focussed!…. but go gently…you can always begin again. (Christine!)’   Looking outwardly – life in the world. Mine is a low-level spirituality, but I try to keep myself open to receiving and reflecting God’s grace, breathing in the sustaining air of the Divine Presence in which we all live. This means a Brother Lawrence approach, simply expressed by George Herbert – ‘Teach me, my God and King, / In all things Thee to see, / And what I do in anything / To do it as for Thee.’ 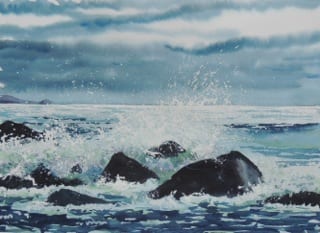 I have played a conflict resolution role in our resident’s association, and fallen into leading an arts development group for the enhancement of our shared spaces, based on images I have ‘received’ from our immediate neighbourhood. I walk with camera at the ready, expecting the unexpected……….I spotted this pearl of wisdom yesterday from a sports shop window –  I go to weekly watercolour classes, enjoying also the social aspect of being in a group.  I’m experiencing what an enlivening thing it is to mine the rich seams of spiritual insights that practising the arts can hold for me. Letting go – allowing a line to take me for a walk, instead of controlling all the time.  Taking risks – releasing the watercolour to find its own way often surprises and excites me.   Working/playing on the edge is often where the true beauty is to be found. Sometimes I experience a feeling of being taken over by a greater power.  Not only are these valid spiritual experiences in themselves, but they point me towards the deeper  manifestations of God’s Grace that enter my life when I practice meditation – relaxing, letting go, and allowing The Spirit to inform me.   Just as the stroke of a loaded brush embodies the creative impulse of the painter, so a well turned vocal or instrumental phrase can embody, as well as re-create, the musical thought of the composer.  Have you ever watched a flute player?   My parting shot in active choral singing was in Bach’s St Matthew Passion last Easter.  It was a forceful reminder of the towering spirituality of Bach’s work, and how deeply it can penetrate my innermost being.

Influences have been (and are) – Brother Lawrence, David Steindl-Rast, whose book ‘Gratefulness, the Heart of Prayer’ somehow gave me a praying voice, Richard Rohr’s ‘The Naked Now’ that opened new doors about living in the present, despite his idiosyncratic style! And I like the directness and simplicity of ‘Quaker Faith and Practice’.  My mentor and friend feeds me on strong meat, suggesting – TS Eliot’s ‘Four Quartets’ and Richard Holloway’s bracing ‘Crossfire’. Two poems that have been with me for many years are Francis Thomson’s  ‘The Hound of Heaven’, and Donne’s  ‘Batter my heart three person’d God’

For the record, I founded the East Cornwall Bach Choir (1965), and Cornwall Youth Orchestra (1970).  Since retiring I’ve led the formation of two charitable trusts – Music & Dance Education (1989), Arts for Health Cornwall & Isles of Scilly (2000) This charity aims to improve health and well being through creativity.   It gives me considerable satisfaction to know that they are all currently thriving, are providing inspirational creative experiences, are developing spiritual awareness, and are potential channels of grace for receptive participants. I retain strong links with them.  For everything, I’m deeply grateful!

James Sargent was born in the East of England in 1929 and taught Secondary School class music there for 10 years. A move in 1964 brought him westwards to Truro in Cornwall as County Education Adviser for Music. Dance and Drama were added to his brief from 1987.  He retired in 1992 and still lives in Truro.