I am delighted to share another beautiful submission for the Monk in the World guest post series from the community. Read on for David Ford’s wisdom on the journey of becoming a monk in the world:

How do I live as a monk in the world?

Labels are so necessary but can also be misleading, so I usually try to avoid them. Am I really a ‘monk in the world’? It is a label that does have some resonance, so perhaps you will bear with me while I wear it for a few minutes.

Admittedly, I have always felt drawn to the monastic. Having a great aunt who is a Sister in a convent and a grandmother who used to live in that same convent rest home my visits to the convent, as a child and as an adult, were frequent and left a lasting impression on me.

The concept of being a monk in the world first existed in a shadowy, undefined way, lurking in the back of my mind for many years (why shouldn’t monkish activities be practiced by lay people?) The concept developed over time but became properly crystallised when I read “Monk Habits for Everyday People” by Dennis Okholm.  This book explained what it was to be a monk (Benedictine) in the world. But it also brought the realisation that, actually, I would make a pretty poor monk. While I longed for Brother Laurence’s ‘living in the presence of God’, I wasn’t at all suited to the more ordered and routine aspects of monastic life (inside or outside of a monastery).

So, for me, living as a monk is not so much about leading a disciplined and ordered life-style but more about pursuing a contemplative, spiritual, life where life its self becomes a sacrament, daily living becomes prayer, and time spent with others – intercession – the ordinary and mundane are transfigured by and into the spiritual.  In this sense I believe that Jesus was teaching us a new way of ‘being’ rather than another way of ‘doing’; life as a spiritual discipline, not life punctuated by spiritual disciplines. In theory this should all be very natural, and being a spiritual person no more difficult than breathing. In practice it’s more like riding a skateboard; exhilarating when it’s going well, but usually involving lots of falling off and grazed knees! Am I a monk? Perhaps.

The other aspect of this ‘monk in the world’ is the “in the world” part. My experience of church life over the last forty years has been that most churches rather expect the world to come to them. Also, I found that churches have a tendency to consume vast amounts of their congregation’s time on church activities; mostly very worthy but not necessarily very world changing. Being a monk in the worldmakes my place of belonging outside of church walls and in the community. I can still go to church, but I go as a visitor not as a resident. For me this is a very important change in focus.

Last year I reached retirement age but I have a three-day-a-week job and I’m not about to quit. I’m still there because I love the people I work with, I’m “in the world” and being Christ to those I work with in the best, though imperfect,  way that I can. Being a ‘Monk in the world’ isn’t an achievement or a state of self-defined holiness, it’s about getting ‘life-dirty’ along with everyone else, and being one of God’s living epistles at the same time. Am I ‘in the world’? Pretty sure that I am.

Coming across “Abbey of the Arts” last year was very timely for two reasons:

Firstly, I broke my first camera when I was four years old. It wasn’t mine and I wasn’t yet a photographer. But, before leaving school, I did consider photography as a potential career and have broken one or two of my own cameras in an amateurish endeavour since. But photography has been the last hold-out aspect of my life that I felt was not part of who I was spiritually. I had read “The Little Book of Contemplative Photography” (Howard Zehr) a couple of years ago but it hadn’t quite clicked – what an awful pun! But last year I read Christine’s “Eyes of the Heart” and it all began to make sense. I’m still working on this integration but it’s now a work in progress and photography feels more a part of who I am rather than  a separate and competing interest.

Secondly, this ‘in the world’ business can be rather lonely on a spiritual level – I find that it’s not understood by most Christians and, living as I do in a fairly small community, it is not easy to find soul-mates who can support or challenge as needed. Abbey of the arts has connected me with others who have the ability to accept those with less conventional spiritual perspectives; it might be ‘virtual’ but it’s so much better than having no spiritual ‘home’!

My arrival at “monk in the world (perhaps)”, has had a long genesis peppered with many helpers, quite a few of whom have passed on. Oswald Chambers – for shaking me out of my self-righteous complacency. Samuel Logan Brengal, for holding up the banner of holiness so consistently. Evelyn Underhill for clearly explaining the mystical path to a novice. Catherine de Hueck Doherty for causing me to use so much highlighter in my copy of “Poustinia”. More recently, Carl McColman (The Big Book of Christian Mysticism) and Richard Rohr (Falling Upward) have nudged me onward. There have been many others over the years.

Life is truly a journey; a mysterious, spiritual journey if we plumb its depths. For me making that journey as a ‘monk in the world’ seems to be the result (though not necessarily the final result) of things learned that stretch right back to my childhood. Perhaps we journey in circles. 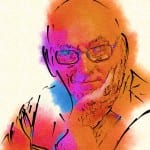 David was born in the UK where he went to school and spent the first part of his life working in Local Government. It was during this time that he met Annette while they were both serving with the Salvation Army. Three months later they were married and settled in Hertfordshire where they eventually had two of their three children (Andrew and Katie). in 1987 they decided to move to New Zealand (Annette’s home) and settled in Christchurch where David found work as a project manager in the IT sector. A short while later they were joined by their third child, Bethany. In his 65 years, David has had the privilege of being a part of Methodist, Anglican, Salvation Army and Baptist congregations and likes to focus on the things that unite denominations and faiths.