I am delighted to share another beautiful submission for the Monk in the World guest post series from the community. Read on for Jim Cyr’s wisdom about the grace of stories:

“My story is important not because it is mine, God knows, but because if I tell it anything like right, the chances are you will recognize that in many ways it is also yours… it is precisely through these stories in all their particularity, as I have long believed and often said, that God makes himself known to each of us more powerfully and personally. If this is true, it means that to lose track of our stories is to be profoundly impoverished not only humanly but also spiritually.” ? Frederick Buechner

“Everything happening, great and small, is a parable whereby God speaks to us, and the art of life is to get the message.” –Malcolm Muggeridge.

Do you know why God created people? Because God loves a good story! For me, being a monk in the world is all about hearing and telling God’s story.

For some reason, God has wired me with an antenna for hearing his voice through stories, both sacred and secular. I have heard God’s voice through the story of Longinus, the centurion who pierced Jesus’ side with a spear. When the blood and water from Jesus’ side spurted into his eyes, his growing blindness was healed and the darkness of his past life was washed away. Longinus went on to be martyred for Christ for refusing to bow down to a Roman idol.

I have heard God’s voice through the story of St. Godric, who for years struggled between the pull of worldly passions and the call of God on his life. Godric finally decided to follow the call of God and became a hermit on the hunting preserves of Sir Flambard, a powerful knight. There Godric became a shepherd to God’s wild creatures and God’s hurting people.

I have heard the voice of God through the story of St. Kentigern, or St. Mungo (“My Darling”) as he was nicknamed. Mungo is the patron saint of Glasgow, Scotland. He was the illegitimate son of a princess of the Scottish lowlands. When it was discovered that the princess was pregnant and she refused to reveal the father, she was rolled down a steep hill and survived only to be set adrift in the ocean in a coracle. Unborn Mungo and his mother were rescued by a hermit who raised Mungo as his foster son. Mungo went on to be a champion of those who were falsely accused and persecuted. Through these stories God has taught me that God can use me even though the first half of my life was broken by abuse, sin, and failure.

How do I tell God’s story? First I attempt, though most times poorly, to incarnate God’s story through listening presence. My work in a jail, a prison, a residential facility, and now as a crisis intervention specialist has allowed me many opportunities to be an ear of God “listening people back into existence.” Listening with compassion is the best way I’ve found to tell God’s story by incarnating it. Putting flesh and blood on the story of God allows people experience God’s love in real time as they struggle with making sense of their own story.

I also attempt to tell God’s story by literally telling it. As a storyteller I tell God’s story from the Hebrew and Christian scriptures. Biblical storytelling has been a way for me to enable people to hear God’s story again as if for the first time as the story becomes incarnate through the teller. Since all truth is God’s truth, and since the truth of God is too big to be contained only in one tradition, I also tell God’s story as it is found in the sacred stories of other traditions and in folktales of different cultures. 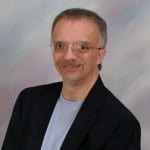 Jim Cyr is a crisis intervention specialist for the NJ Division of Children and Families’ Children’s Mobile Response and Stabilization Services through Catholic Charities, Diocese of Metuchen. Jim’s storytelling, called “Heart Tales,” seeks to energize people for whole-hearted living through stories of healing, wisdom and faith. Find Jim at www.hearttales.net.