I am delighted to share another beautiful submission for the Monk in the World guest post series from the community. Read on for Cyndi Gallo Callan’s wisdom about what matters most:

Prior to Thanksgiving I began thinking about Advent and how I would embrace the season; it always passes so quickly.  Instead of how I thought Advent would be embraced, I found myself reflecting on the theme living as a monk in the world, what it meant in my life, and for those around me.  The reflections moved through me like tidal currents. It was obvious that the Holy Spirit settled within me, as my mind continually had an overflow of memories and thoughts, but with no clear conclusion as to where to start or how to share it. These reflections came at random times, while in church, at work, or on my yoga mat.

It was 24 years ago, after the birth of my daughter, when I started to grow in my faith.  I started to think that if I was intentional and mindful I would eventually get where I was going. So with a lot of life and spiritual growth in-between, I accepted the call to be a Lay Director for a Koinonia weekend retreat in 2011.  I was excited and on fire, but when it was over, I felt a letdown instead of the growth I expected.  Then a desert came.  Needless to say I was devastated.  So groping, I had no choice but to reevaluate my faith life, where I was, and where I was going.  Obviously I wasn’t the one in charge (a spiritual director I had once used to always remind me of that pretty regularly).  Am I there yet?  Certainly not!

Truthfully, I needed to find contentment with my life; not an easy task for me.  Even when life is good, I tend to become overwhelmed very easily.  How could I live contently, and embrace contemplative living, when life was a run-on-sentence?  As Joan Chittister wrote in her book Illuminated Life, it is very possible to achieve “being contemplative in the midst of chaos.”

First-off, eliminating the unnecessary clutter in my life (both internally as well as externally) was a start, and then embracing the important aspects of life the next step.  What was most important was realizing that I couldn’t do this alone.  God’s grace was there, but I needed to let go, let God.

Refining my life meant an overall overhaul of my mind, body and spirit.  Emptying myself and starting from the beginning, was my first step. While for years I claimed to be “health conscious”, I refocused and fine-tuned nutrition, holistic and simple living, consistent exercise which included yoga (which is now a daily practice) and reading books that promoted growth to help balance my mind, body and spirit. Combining this with faith, intention, and mindfulness, I started seeing my interior life of prayer and contemplation, as well as my physical well-being reshape, and reshape some more.  Am I there yet?  No, not yet.

While there are several areas in my life where I can aspire to living as a monk in the world (or the beginnings of), one area specifically is that of a pro-active mom (and guardian) for my adult son.  Jason, 32, is developmentally disabled with cerebral palsy.  He was 3 months old when his life tragically was changed.  While his cognitive and motor skills are impaired, and the years have not been without their challenges of varying degrees (for both of us), my son has grown into an active, compassionate and social young man.

Almost eleven years ago, six months after his 21st birthday, we decided it would be beneficial to his growth for him to live in a group home.  There were also difficulties on the home front during those years and finding a group home which was in his best interest would be a challenge, but by divine intercession, one found us.  We visited and immediately knew it was right, but it was almost two hours away.  After Easter 2003 he moved.  While initially the positives outweighed the negatives, there were challenges to be overcome after the first few years; some serious.  In 2010, stress-filled, with new changes forthcoming in my life, I needed to take the “bull by the horn” and be more of an advocate then I had been.  With the help of the Holy Spirit, the Advocate, my life started to transform with one of my purposes in life becoming more apparent:  my son.

Due to demographics mostly, I did not visit or have Jason home as often as he would like.  I would remind him that I didn’t see my parents (his grandparents) but once a year (they are 16 hours away), or his brother and sister, who are away at college, as often either. As I continued to empty myself of the unnecessary clutter, there was room for what matters the most. 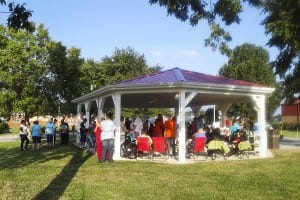 This past summer I started going down for visits more frequently than in years passed.  On Friday evenings the Activities Department where he lives holds either dances or karaoke. Jason loves them both and asked if I would come down and take him to the dances.  We agreed on once a month (weather permitting). This time has become important to him (along with other “special” things we do).  However, what I also found was that going to these dances not only is a highlight for my son, but it also brightened the lives of the other residents as well.

For me, living as a monk in the world can be realized by living in the present moment, focusing on continued growth of the body-mind-spirit, and being Christ in the world for others in a way consistent with simple living; a content and graceful lifestyle.  When we get caught up in the busyness and stuff of the world we can lose our creativity and sense of purpose.  In this way I honor not only my life, but also the people I interact with daily, as well as those whose paths I have yet to cross. 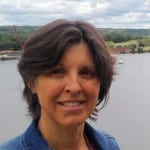 From several east coast “hometowns,” I’ve lived in central Illinois since 1990.  I have three adult children.  I am the secretary for the Director and Associate Director for Catechesis in my diocese. My interests include cooking, dance, photography, and yoga.  I am thankful for my husband who journeys with me.  http://cynthiagallocallan.blogspot.ie/