I am delighted to share another beautiful submission for the Monk in the World guest post series from the community (you can read the call for submissions here). Read on for David Norling‘s wisdom about mindfulness and cultivating non-judgmental awareness:

I went through a phase in college where, in addition to Birkenstocks, I wore very simple clothing: cotton, loose fitting, monochromatic. There was a girl in one of my classes who asked if I was some kind of a monk. Without thinking, I said, “Yes.” The idea must have appealed to me. To imagine myself as set apart for a higher calling, free from the trappings of a consumer identity. Even though I was attracted to the girl, I let her believe this about me for the rest of the semester, presumably hindering any chance I might have had with her.

This was during Ronald Reagan’s first term and I was transitioning from a Business Administration major to English with a Creative Writing emphasis. Another strategic blunder. Not that I have any regrets, experimenting with ones’ identity is inevitable. I’m glad to have gained a sense of self as separate from my professional identity at a relatively early age. Remembering this story makes me smile and wonder, especially now, when I would describe myself without reservation as a contemplative. Perhaps the tender shoots of a new way of being in the world were breaking through what was at that time rather arid soil.

I grew up Evangelical. Looking back, it seems as if the air I breathed was richer with judgment than with oxygen. Of course, we weren’t explicitly encouraged to be judgmental. Jesus had clearly discouraged this behavior. Our practices were referred to as rightly dividing the word of God, resisting the devil, and standing up for eternal truth. However it might be defined, the result for me was that I ended up judging everything that I saw. I also painted myself into a corner with a lot of premature conclusions and preferences that became untenable.

I don’t blame all of this on my religious heritage. There were cultural and temperament factors, as well. As it turns out, everything is raw material in the hands of the divine artist. When I eventually “stumbled” across Christian contemplative literature, the soil of my soul was thirsty for the nourishment offered from that tradition. But it wasn’t until I was introduced to non-judgmental awareness that I found a life-long practice. Mindfulness, and non-dual thinking are other ways of naming the same approach. While these are also attractive it was the emphasis on non-judgment that felt like a prescription specifically designed for someone with my faults.

One of the ways that Richard Rohr describes contemplation is, “meeting as much of reality as we can handle in its most simple and immediate form, without filters, judgments, and commentaries.” This is the vision to which I aspire. That I continually fail matters less and less. Simply desiring the gift of new vision and risking the vulnerability of not knowing changes everything without depending upon the feeble psychic muscle we call willpower. Exercising willpower is all about mastery and victory rather than process. I have been much helped by Simone Weil’s idea of the will. She saw its purpose as rather humble, as the steering wheel of our attention. Just as our bodies become what we consume, so it is with our souls. We become like that to which we pay attention.

Ms. Weil also wrote of a “Method for understanding images, symbols, etc. Not to try to interpret [judge] them, but to look at them till the light suddenly dawns.” I think of this as the more beautiful way, because when the light dawns the only thing to do is walk in it and rejoice. I would trade a decade of mental certitude for a moment of light.

I was a little suspicious of these ideas at first. They can be difficult concepts. It felt reasonable to think that I must discern right from wrong. It felt as if I would be affirming evil if I didn’t call it evil. But, of course, there are problems with naming things, especially when done quickly. I’ve since come to think of non judgmental awareness as a deeper form of discernment. Deeper and slower. By suspending quick and conditioned judgments, I give God’s spirit time to reveal deeper, less obvious truths. Truths that can only be seen with the eyes of love. Only love sees rightly. And with a little reflection I had to admit that it was rare for me to see with the eyes of love.

“One must be so careful with names anyway; it is so often on the name of a misdeed that a life goes to pieces, not the nameless and personal action itself, which was perhaps a perfectly definite necessity of that life and would have been absorbed by it without effort.” –Rainer Marie Rilke

I’ve come to realize that nonjudgmental awareness includes awareness of judgment. I will, inevitably, have superficial preferences and conditioned responses. Noticing them, in what I like to think of as my shared awareness with God, is what allows me to notice myself judging without actually pronouncing or projecting on to others. Just as delayed gratification is a necessary part of maturity, so is delayed judgment a necessary part of mature discernment.

A natural outflow of this is that the Biblical imperative to “watch and wait” has become my modus operandi. It has also been helpful to receive a new name: He-who-does-not-know. When I live from this identity it’s not uncommon for me to see everything as revelation and even as a gift. Every disappointment, every temptation, even confusion and despair, it’s all an invitation to a new way of seeing.

Speaking of seeing, my son gave me a book for Christmas titled Contemplative Photography. The subtitle summarizes as well as anything I’ve seen the heart of my desire: “Seeing with Wonder, Respect, and Humility.” God help me… 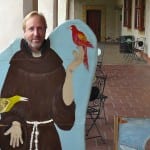 David has been the owner/operator of a carpet cleaning franchise in Orange County, CA for over twenty years. More recently, he finished the certificate program in spiritual direction though Loyola Marymount. His wife Mary will complete the same program this summer. David blogs about contemplative listening and spiritual direction at awestruckdumbpilgrim.com.