I first encountered author Mary Sharratt‘s work about a year ago when my interest in Hildegard of Bingen drew me to her new novel Illuminations: A Novel of Hildegard von Bingen.  We don’t know much about Hildegard’s years spent at Disibodenberg, but Mary does a masterful job of weaving together the historical sources we do have with historical imagination to create a compelling story about a remarkable woman. She is a beautiful writer and I loved the book. I am delighted that Mary was willing to share her own wisdom here about being a monk in the world.

Mary is also offering a free copy of her book to one lucky winner.  To enter the random drawing please leave a comment on this post below about your own interest in Hildegard.  You can earn extra entries by sharing this post on Facebook, be sure to tag me so that I can see that you have shared it.

Read on for Mary’s insights:

Visions of the Green Saint 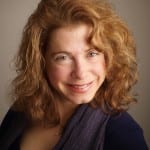 How has Hildegard von Bingen, the 12th century visionary abbess, polymath, and powerfrau, taught me to be a monk in the world? Her visions were so magnificent, so all-embracing, that she transcended cloistered walls and embraced the entire cosmos.

Born in the lush green Rhineland in present day Germany, Hildegard (1098–1179) was offered as a child oblate to Disibodenberg Monastery and walled into an anchorage at the age of eight or fourteen, according to which version of her biography you read. This sensitive child was expected to lead a life of utter silence and submission. Yet, after decades in her “mausoleum,” as Guibert of Gembloux’s account of her life calls the anchorage, she broke free to become the greatest voice of her age.

Hildegard founded two monastic houses for women and went on four preaching tours. She developed her own system of holistic medicine still practiced in modern day Germany and composed an entire corpus of highly original sacred music. She wrote nine books addressing both scientific and religious subjects, an unprecedented accomplishment for a 12th-century woman. Her prophecies earned her the title Sybil of the Rhine. An outspoken critic of political and ecclesiastical corruption, she was a reformer who courted controversy.

Hildegard calls me, as a spiritual woman, to resist all forms of physical and mental confinement. Instead she urges me to embrace life as passionately as she did. I believe she calls on all of us to discover our inner polymath and allow our God-given gifts and talents to unfold to their greatest fruition.

Following her example, I balance my daily meditation and prayer and my hours of writerly solitude with forays into the Divine splendour of nature. Hildegardian spirituality counters acedia, or spiritual dryness, with the ecstasies of Viriditas, her revelation of the animating life force manifest in the burgeoning green world, that sacred power infusing all creation with moisture and vitality. To her, the Divine was manifest in every leaf and blade of grass. Creation unveiled the face of the invisible Creator.

I, the fiery life of divine essence, am aflame beyond the beauty of the meadows, I gleam in the waters, and I burn in the sun, moon and stars . . . . I awaken everything to life.

Living in a semi-rural area in Northern England, my daily covenant is to go outdoors every day, regardless of the weather, and take care of my spirited Welsh mare who lives at a stableyard on a hilltop with views over the Pennine moors. Here the blasting winds and constantly changing weather patterns, the spring bluebells and shimmering trees, the owls and kestrels, the sun, moon, and circling stars, all place me in a state of mindful wonder. This is my daily revelation of the Divine whom Hildegard called Mother.

Sapientia creates the cosmos by existing within it.

O power of Wisdom!
You encompassed the cosmos,
Encircling and embracing all in one living orbit
With your three wings:
One soars on high,
One distills the earth’s essence,
And the third hovers everywhere.

Hildegard’s theology of the feminine is deeply inspiring to me. While writing Illuminations: A Novel of Hildegard von Bingen, I kept coming up against the injustice of how women, no matter how devout they might be, are condemned to stand at the margins of established religion, even in the 21st century. Women priests and bishops are still the subject of controversy in the worldwide Anglican Communion while Pope John Paul II called a moratorium even on the discussion of women priests in the Catholic Church.

Modern women have the choice to wash their hands of organized religion. But Hildegard didn’t even get to choose whether to enter monastic life. The Church of her day could not have been more patriarchal and repressive to women. Yet her visions moved her to create a faith that was immanent and life-affirming, that can inspire people of all faith backgrounds today. Hildegard’s re-visioning of religion celebrated women and nature. Her vision of the universe was an egg inside the womb of God.

Too often religion has been interpreted by and for men. But when women speak their heartfelt spiritual truths, a whole other landscape emerges—one that we haven’t seen enough of.

Hildegard shows how visionary women might transform the most male-dominated faith traditions from within. Under Saint Hildegard’s mantle, we may all become sisters and brothers of Wisdom, our voices moving, as Hildegard’s did, like a feather on the breath of God.