Our next post in the Monk in the World series is from Claire Bangasser, whom I have known for several years now in the virtual world of writing on faith and spirituality. She makes regular pilgrimages on the Compostelle and the subtitle of her blog is “I re-imagine a Church engaged in dialogue with people at the margins,” a wonderful mission indeed.  She writes about justice and peace, women’s spirituality, and here shares about returning to her roots to encounter Godde*:

A Spiritual Being Having a Human Experience

“Not all are called to be artists in the specific sense of the term. Yet, as Genesis has it, all men and women are entrusted with the task of crafting their own life: In a certain sense, they are to make of it a work of art, a masterpiece.”  —John Paul II, Letter to Artists 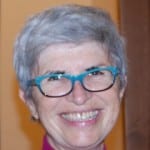 We are born to create and give life, literally and figuratively. As Godde’s* creatures, we are made in Her image and thus are creators as well.  We are also her temple (1 Co 3:16) and her work of art (Eph 2:10). Monks in the world and artists crafting our own life.

I am as much an artist as I think I am: Just like in the story of the woman coming across someone who was laying bricks, another who was raising a wall, and the third building a cathedral. Which one of the three am I? What am I creating with my life?

“We are spiritual beings having a human experience,” wrote Teilhard de Chardin. Like the god Indra who, to have fun, became a pig and then promptly forgot who he truly was until his spell was broken, we forget that we are not only “made from cosmic dust birthed in the interior of ancient stars that long predated our planet and solar system” (Sr Ilia Delio, The Emergent Christ); we also bear a divine seal imprinted on our heart and soul.

I have lived most of my life, however, without seeing myself as a temple and a work of art. For a long time, I did not know what to make out of my life. I was a spiritual seeker, looking for the Divine in Hinduism, Zen Buddhism. My own Catholicism seemed unable to answer my questions.

If I look back over my life, I see a tapestry made up of spiritual and human threads, with spiritual moments wowing the human side of me. Every time I revisit my life, I find new moments when the divine came to surprise me. Still, it takes me a long time to recognize that this continuous thread of divine light throughout my life is what sustains it.

I remember first encountering the divine when I was four or five. My parents wanted me to be taught catechism as soon as possible. Once a week, I visited a tall priest in a long black cassock who introduced me to matters of Godde. In the evenings, my father took me on his lap and read me Bible stories. The day of my first Communion I walked, so small and all in white, to the altar railing to receive my very first Eucharist. A sea of legs opened in front of me and I reached an altar glowing in a cloud of golden light which enchants me to this day.

Some years later, on an Easter morning, coming out of the church with my grandfather, I exclaimed to him that my heart felt so light and happy, it was as if I were floating above the ground. These things happen, my grandfather told me with a smile.

It seemed then that my spiritual life had started on the right foot and that I was heading somewhere. But then came a long detour, a sort of getting lost in the woods of life. A confession in an antique cathedral at twenty filled a priest with wonder — a conversion, he kept exclaiming. Still, I had truly lost my way.

Years passed. I met a wonderful man, we got married, we had two little girls. Unaware of whom I truly was, my humanity blinded the spiritual me. One evening though, at thirty, I experienced the Divine in such a powerful manner that it launched me on a quest to recover that brief encounter. Looking into my own Catholic tradition for an explanation never crossed my mind. It was linked to my childhood and early teens and did not feel up to the task. So, Hinduism, Tibetan and Zen Buddhism became lands of exploration.

In my early 40s I returned to my religious origins thanks to a young Brahmin woman who passed on to me the fire for Jesus Christ that filled her heart. This and encountering Jesus in the slums of Madras showed me — at last — where my path was. Those six weeks spent studying women’s leadership in the slums were a turning point for me. How odd that it is India itself, where I had followed a Vedic master and attended teachings by the Dalai Lama, which pointed me back to my Catholic roots.

After more than twenty years of spiritual wandering, I came upon a spiritual path which I have been following ever since. Cursillo, Joan Chittister’s The Rule of Benedict, theological studies, Ignatian Spirituality, walking the Camino, and Christine Valters Paintner’s many courses and books, all came to me and added fuel to this strange spiritual hodgepodge which I am today.

Now I have reached the Crone age, with aches and pains kneaded into my daily life, and somehow my spirit soaring above them (most of the time). I connect to the Divine through loving my family, talking with friends, writing my blog, praying, cooking, spending more and more time in silence, walking, enjoying Nature’s beauty: All this turns into a musical leitmotiv my life keeps humming.

Godde’s fire burns in my heart, a fire which may some day reveal to the spiritual me the meaning of this human experience. After all, I may just be a heartbeat in the vastness of the Cosmos, a wisp of a thought, a sigh of wonder, a longing for union, a fleeting smile on Godde’s face, a dream conjuring up a sanctuary deep within the ground of my being, a sanctuary longing to greet me, to welcome me at last.

*Note: Gen 1:27 tells us that God created humanity in his own image, … male and female he created them… Male and female, in his image… Why is so much of Godde always in the male image then, when female is there as well?

Writing Godde this way may look childish, silly, and unnecessary. I need Godde as a way of surviving in the woman-unfriendly environment that is still the Roman Catholic Church at this point. As a cry for help toward the Infinitely Good, I say and write ‘Godde’ to assert the dignity of being a creature of Godde made in Her image with Her heart and Her dreams for humanity.

Claire Bangasser is a feminist, monk, artist, and pilgrim. You can find out more about her at her website, A Catholic Woman’s Place and her blog A Seat At The Table.