(Not quite a) Monk in the World guest post: Carl McColman

We continue our Monk in the World series of guest posts with a reflection from Carl McColman.  Carl has written some beautiful books about mysticism, introducing lay people to the term and inviting them to embrace its gifts for their own lives. I am pleased to welcome his (somewhat contrary) voice into this space:

Living in the World (Whether or Not You’re a Monk) 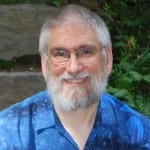 Ten years ago Wayne Teasdale wrote a book called A Monk in the World.  It’s based on an idea he received from Bede Griffiths, the Benedictine monk who founded a Christian ashram in India. The idea is simple: the time has come for the spirituality of the monk to travel beyond the confines of the traditional cloister. Others have picked up this theme as well. Bruce Davis wrote a book called Monastery Without Walls: Daily Life in the Silence. Joan Chittister’s poetic look at an uncloistered spirituality is called Monastery of the Heart, reminiscent of the lovely title of a book by the Association of Contemplative Sisters, Cloister of the Heart. It’s a simple, powerful and lovely message: living in a monastery, a “set apart” community of vowed religious celibates, is no longer a requirement for cultivating a meaningful contemplative life. As Thomas Merton so powerfully discovered during his  “epiphany” in 1958, the call of spiritual transformation goes out to all human beings, not just those with a vocation to the cloister.

So how do I live this “un-cloistered” life? First of all, forgive me for a being a bit contrary, but I don’t like to think of myself as a monk in the world. After working for a Trappist monastery for almost eight years, and forming a spiritual bond with the monks as a Lay Cistercian, I love the monks and admire them for their life — but just as Merton’s epiphany made him feel re-affirmed in being a monk, I feel just as affirmed in not being one. Calling me a monk makes about as much sense as calling the typical cloistered monk a husband. It’s just an inaccurate use of language. It’s okay if other people want to call themselves monks; that’s fine. It’s just not a word that works for me.

I think why I bristle against it is because of the resistance I’ve run into when I tell people I study and write about mysticism. “I could never be a mystic,” I often hear, and usually from people who are dedicated Christians, regular churchgoers and who sincerely try to live good and prayerful lives. They are committed to fostering a relationship with God, but can’t imagine themselves as mystics. Why is that? I think it goes back to an unspoken assumption that mystics, like saints, are somehow special, members of God’s elite squad. I think many people have similar ways of thinking about nuns and monks. They are the special ones, who are closer to God, and who are supposed to be holy, or contemplative, or mystical. But that’s not for the rest of us — we’re too busy paying the mortgage and getting the kids to school on time.

I think we need to be wary of language that creates distance, or separation, or subtly suggests that people inhabit different “categories” or “types” of faith or spirituality. It is said that Dorothy Day once scoffed, “Don’t call me a saint. I don’t want to be dismissed so easily.” She knew that once a person was canonized, the average Christian saw them as representing some sort of unattainable ideal (which meant, of course, that there was no point in even trying to be like the saint).

So I say, don’t call me a monk — not even a “monk in the world” — because I don’t want the spiritual practices, that mean so much to me, to be dismissed so easily. I don’t want to in any way suggest that regular daily prayer, including lectio divina, meditation, and the prayer of intentional silence, are only for monks (or monk wanna-bes). Contemplative practices are for everyone, not just monks or nuns. And engaging in contemplative practice doesn’t make you a “monk in the world” (at least, not in my book). It simply confirms that you are intentional and serious about your faith. It simply helps you to be a mature Christian.

If we think that lay contemplatives are “monks in the world,” then what does that make cloistered monks: are monks “out of this world”? I’m being silly, I know, but it is an important point.

Granted, the Bible has language about being “in, but not of, the world” and following that, there is this idea that somehow the monastic cloister is separate from the mundane reality the rest of us inhabit. I admire how monks, even in our hyper-connected world, try to shield themselves from the less edifying qualities of our consumer society. But any of us can, at least to some extent, shield ourselves from the unhelpful aspects of our culture. We don’t have to live in a cloister to do it. And especially nowadays with the prevalence of electronic communication, being in a cloister is no guarantee that you will be removed from our dysfunctional culture.

So how do I try to foster a contemplative life in the midst of my busy life “in the world”? It’s not so much about what I do but what I don’t do. I seek to live simply, modestly, and to be vigilant about maintaining enough time for weekly Sabbath rest and daily silence. Likewise, I believe contemplation is not about what we do (as if engaging in more and more spiritual activities can “achieve” contemplation) so much as about our view. “The fullness of joy is to behold God in all,” declared Julian of Norwich. Richard Rohr called it “learning to see as the mystics see.” What is the heart of this beholding? To see with the eyes of love. So everything contemplatives do, from a daily practice of silence and prayer, to living simply, to honoring Sabbath time — it all goes back to fostering that loving view. That, to me, is the heart of the contemplative life: no matter what label we wear.

Carl McColman is the author of Answering the Contemplative Call: First Steps on the Mystical Path and The Big Book of Christian Mysticism: The Essential Guide to Contemplative Spirituality. He is a Lay Cistercian of Our Lady of the Holy Spirit, in association with the Monastery of the Holy Spirit in Conyers, GA. Connect with Carl at his blog, www.carlmccolman.com, or on Twitter at @carlmccolman