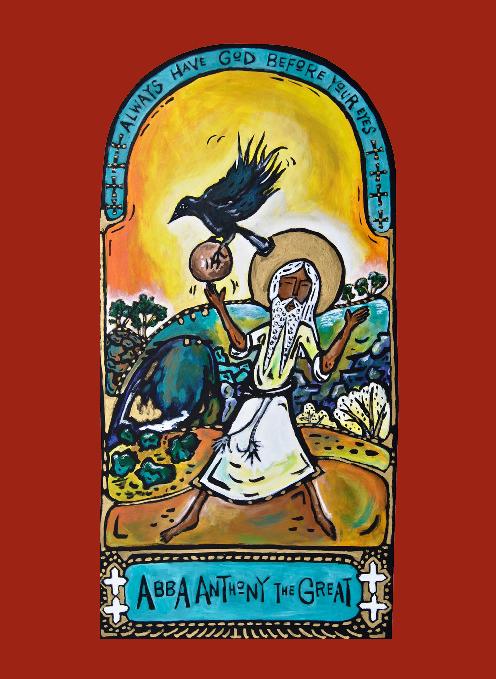 Next Saturday we continue our pilgrimage through the mystics when I will be leading a retreat on desert father St. Anthony the Great and desert wisdom.

St. Anthony, also known as Anthony the Great, is considered to be the founder of the Christian monastic movement.  He moved into the desert at the end of the third century to seek solitude and by the end of his life thousands had followed him there to imitate his way of life of extreme asceticism.

Paul of Thebes is recorded as the actual first monk in Christian tradition to live in the desert, but Anthony’s example and story ignited a movement.   This was a period of great transition in the church.  During the first and second centuries, to be Christian was illegal, and many were martyred for their faith.  In 313 Christianity became tolerated, and soon after became the state religion of the empire.  People continued to flee to the desert to find a place where they could live a holy life free of the perversions of the culture they lived in.  In Listen to the Desert, Gregory Mayers writes:

“When they began to wake from this shared trance, when they suspected they were more slaves than free, the men and women of the desert sayings fled their culture to escape the disguises and distractions it perpetrated on their human spirits. It is no small act of courage to face squarely the fictions in our life and the troubling sense that something isn’t quite right about our life.”

Those who went to the desert came from all walks of life, some living a wealthy life in the city, some were poor farmers.  Some had education and others had little.  This coming together of disparate people and experiences into living for a common goal was a living example of what Christian community was supposed to be with no distinctions between disciples.  This has had an significant impact on monastic tradition that follows.  St. Benedict was careful to include principles in his Rule to help the monks in his community not differentiate from one another based on past wealth or resources.  Everyone who became a monk arrived as equals.

Those who dedicated themselves to the life of the desert sought out a spiritual elder.  Their lives were centered on a commitment to continual prayer, freeing themselves from the tyranny of thoughts, keeping their lives simple so as to focus on God, and memorizing scripture so they had sacred wisdom within easy access as books were very rare at the time.

These desert monastics are fiercely uncompromising in their advice for fellow pilgrims traveling the interior geography of the human heart.  This fierceness is refreshing, it takes our woundedness seriously, but always points back to our beauty as creatures of God.  Their wisdom is in the service of healing and love rather than theological systematization of ideas or doctrine.

The desert mothers and fathers believed that God is always with us, never absent, even when in the struggle we experience a kind of absence or loss of our comfortable understandings of who God is and how God works in the world.  God loves us and stays with us no matter who we are or what we are doing.  We are loved in the middle of life’s messiness, in the wounded places.

In this place of utter humility and surrender, where we encounter the divine and discover this infinite love embracing us, even in the midst of brokenness, we also discover how to love others.  As we come to accept our own limitations we begin to accept the limitations of others with more grace and compassion.

Join me next Saturday to have an experiential encounter with desert wisdom. Simon de Voil will be supporting the retreat with his gift of music. Simon and I are also offering our monthly Contemplative Prayer Service tomorrow, January 9th.

PS – I have created a new album of some of my poems including a few poems from my collection coming out in May Love Holds You: Poems and Devotions for Times of Uncertainty. You can find Sound and Stillness II here(only available as a digital download).