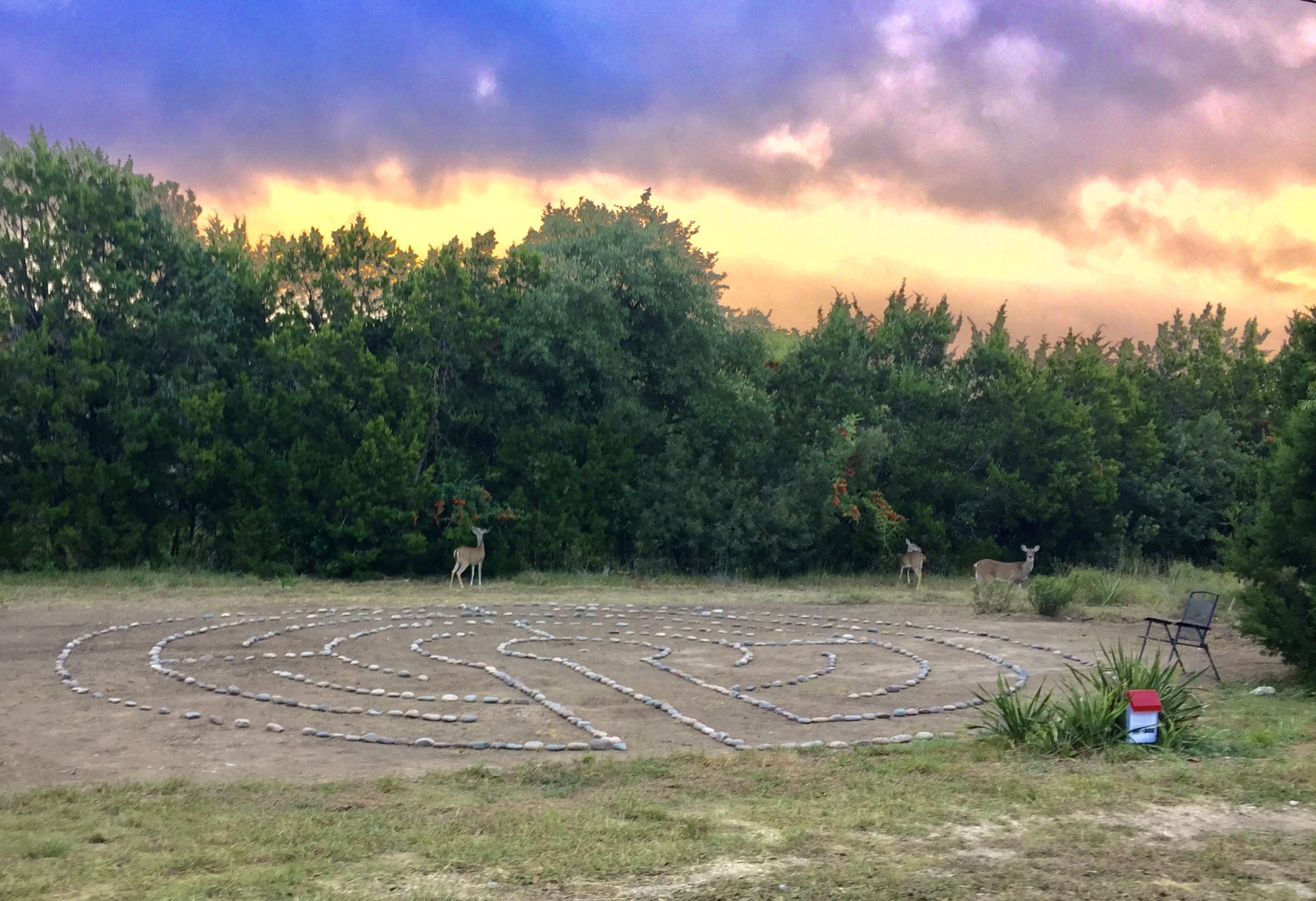 I am delighted to share another beautiful submission to the Monk in the World guest post series from the community. Read on for Becky Rische’s reflection on creating a community labyrinth.

It’s a strange feeling to follow a calling and then watch it take shape in ways you hadn’t imagined.  As the pandemic wore on and I sought safe ways to practice my faith, a labyrinth’s blend of faith and nature appealed to me more and more. That’s how building a neighborhood prayer labyrinth looped around my mind, and eventually materialized along the local hike and bike trail that runs in front of our home.

I sat on rock piles at local stone supply stores selecting materials, and thought of how this would give the many walkers on our street another way to keep moving and add a prayer to their outdoor time. I had hoped to look out my front window and see people walk through and away in a more peaceful mood.  I had hoped it would provide some community prayer with my literal neighbors in the absence of in-person church services.  And I had sought to meet others who treasured this ancient balm in the midst of a modern pandemic.

Very little of that happened.

First, what initially appeared to be a simple mowing job as land prep, became a major land-clearing project.  A couple of girlfriends with temporarily-shuttered house cleaning businesses needed a new income source, and I felt grateful to get on their work schedule.  When the digging and dragging of brush was finished, it became clear we still needed some heavy equipment to smooth the area enough for less-abled walkers.  Turns out one girlfriend’s husband had access to a Bobcat to do the job. With their children unable to get regular nutrition at school, they were so grateful for the help with grocery bills, and I was so grateful to find a way to help them while honoring the dignity of work, as well as maintain the unrelenting isolation our family’s co-morbidities required.

As the prayer circle took shape, I serendipitously reconnected with a fellow contemplative who recognized the labyrinth under construction, and enthusiastically pitched in with the final placement of rocks.  She now uses it regularly.  She also has long served on the local parks and recreation board and has had several opportunities to support it among curious officials. Without her intervention, the labyrinth may have just as mysteriously disappeared as it appeared.

Unlike my original vision, few regular walkers use the labyrinth.  They initially stopped and read its description, but their intent is to exercise, not be distracted from the serious task of physical training.

Instead, children and families find it magnetizing. Grandparents, newly-charged with entertaining toddlers as a result of the pandemic, arrive daily with young ones who squeal and run through the pattern. Pre-teens are just as pleased with themselves when they complete it.  Since I had hoped to offer a source of peace during the pandemic, I interpret this as an unexpected blessing for families struggling to school energetic children at home while continuing to manage their professional work load. Now several times a week, small bikes park in front of the labyrinth while their owners make a quick stop for a twirl around the rock pattern. It’s an unforeseen delight to watch them.  Once I went to visit with a child and his grandmother staring at the pattern.  “Jesus is in my heart,” he said, in an apparent reaction to what his grandmother had described of the labyrinth.  So it seems a deeper message leaves with children as well.

A description of the seven-circuit labyrinth’s meaning and use lives in a clear box next to it, along with words from the physically-distanced blessing ceremony our Pastor Drew conducted when it was first finished.  Those disappear at a rate of about 8-10 a week, about the number of weekly new visitors to the prayer circle.  Altogether, it seems 30 souls swing through every seven days or so.

Painted rocks appear in the labyrinth with some regularity now.  First it was one with a cross painted on it, now three of those live there.  A lady-bug-painted rock soon joined them, and then rocks of abstract designs and one with plastic googly eyes arrived.  I’ve never witnessed the rock artists leaving their work, but when I have moved them to make more space in the center, the artwork soon returns to its original position.

Books and websites abound on how to pray the labyrinth.  Nowhere have I seen how to interpret the heart-shaped pipe cleaners or old baseball that have appeared in this one.

Last week when my husband gave our dog his final outing before bed, four teenagers were peacefully walking the labyrinth.  (For fun we added solar twinkle lights outlining the exterior circle.). After praying, they skateboarded away.

One neighbor recently mentioned how surprised he was that the labyrinth has remained unscathed by vandalism.  After all, it’s just 650 rocks perched on top of the ground.  I have to admit, I share his surprise.  Especially since it was finished just before Halloween when one neighborhood social media network labeled it a Blair Witch project and a city councilman jokingly responded it looked more like a pet cemetery.  The only vandals seem to be the deer and peacock who travel through and bump the rocks out of place.  Their hoof/claw prints give them away.

But yesterday, a little bit of my original intention was realized when a neighbor I’ve never met, but seen unwaveringly walking on our street for 25 years stopped briefly.  Her bright red cowboy hat and intensely orange athletic shoes keep her top of mind.  She interrupted another streetside conversation about the labyrinth.  She asked if I was the builder, and thanked me three times for creating it.  Her church has one, she said, but it’s not as convenient. And she loved this one. At that moment at least, I felt both of our labyrinth prayers answered.

Becky Rische is retired from a long professional career in writing ranging from city lifestyle magazines to business journals to public relations at major universities. It took a few years to warm up to labyrinth prayers, but it’s now clear that moving her feet opens her heart and she tries to practice it daily.