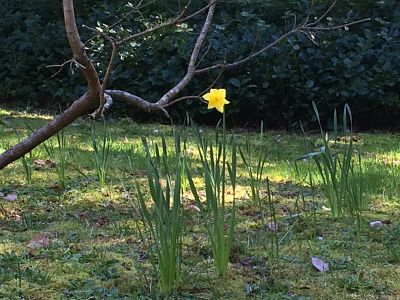 I am delighted to share another beautiful submission to the Monk in the World guest post series from the community. Read on for Shelagh Huston’s reflection on the power of rest.

Last spring, with dozens of daffodil plants in my front garden, I was looking forward to seeing the host of golden daffodils arising with Easter and the lengthening days. In my neighbours’ yards, and along the roadsides, they were everywhere. I waited – but in my garden, only one daffodil bloomed.

A lonely flower, maybe drooping a little with melancholy for her missing companions. Something like I was feeling as we entered the second year of covid isolation. It’s hard to sing alleluia all by yourself, without your heavenly host.
Thinking of daffodils, I recalled an old memory, from when I was six. It was daffodils that inspired me to write my very first song:

Although the words, as well as the tune, were trite, they were heart-felt. I remember the joyful sense in my body of participation in the spring – that wholly unselfconscious, innocent, cheerful rejoicing, the feeling that makes the lamb wriggle and leap. My child-being was rooted in knowing that ‘all manner of thing is well’, and songs sprang from me as readily as daffodils spring from the green earth.

But now, I am old, tired, and finding it harder to rejoice. Despite all the bulbs and green leaves in my garden this spring, the golden daffodils did not sprung forth. Why did the daffodils fail to flower? What shadow fell between the planting and the blooming?

As I sat at my desk, sad and even resentful at my lack of output, I saw a pattern repeating. So many thoughts and ideas about what to write, so many projects started and not finished, so meagre a harvest of completed work, so little shared with the world. Despite the ponderous trudging, the effortful work, I continued to feel like a worthless gardener with a poor harvest.

But then, it’s not fair to say there were no daffodils. There was a small forest of daffodil plants. The leaves were there – it’s the flowers that were missing. And there are thousands of words, paragraphs, documents, on my computer – it’s the beautiful completions, the golden gifts to the world, that are missing.

Why? It’s something of a mystery still. But maybe the roots needed feeding. Although those daffodil plants can manage to survive on the little that happens to drift in, they had been there a long time, and may have worked hard for many years to produce flowers each spring. Perhaps they were just worn down. Perhaps they too were old, tired, and finding it hard to rejoice.

I bought my daffodils a box of bulb food. And slowly I’m recognizing that my own underground sources from which the joy springs forth also need feeding. They can’t be just taken for granted, and expected to produce endlessly. They too need nurturing.

After a year of living without my host of companions around me, it’s not surprising that my alleluias were feeble and few. But beyond that, there’s always a need for the food and drink of the soul, to fatten up and enrich the bulbs that can flower. You can’t know exactly what’s going on in the darkness underground, but somehow, to once again rejoice and create as easily as wriggling and breathing, I need to fasten to the deep roots that nurtured that small singing child.

Last winter, having been deeply depleted from too much work and way too much world stress, I became ill from exhaustion, and could do almost nothing for a couple of months. Into that emptied space came a sustaining flood of love and care from others, and some divinely-inspired insights which I’m still  processing. One part of what I learned was the absolute necessity of caring better for myself. Learned, I say – learned in principle, but I’m still struggling to integrate fully into practice. I need to remember the inexorable requirement for healing power of time.

Feeding my daffodils did not produce any more flowers this past spring. Those bulbs needed to rest, fatten up, drink in sun and rain for a while. Maybe the daffodils and I even need to accept that old bulbs don’t flower as vigorously as they once did. But in the fullness of Kairos time, God’s time, there will be another spring, and a singing host of golden daffodils.

After retiring from work as an Anglican deacon, a World Bank economist in Africa, and a community activist, Shelagh Huston lives with her husband on an island in BC. To help respond to the earth crisis, she is currently writing a book on finding a deeper perspective on meaning-making.