This week we are delighted to share with you the audio podcasts for Day 4 morning and evening prayer of our Monk in the World prayer cycle on the theme of Work. We hope that you are enjoying being able to pray with us in this way! 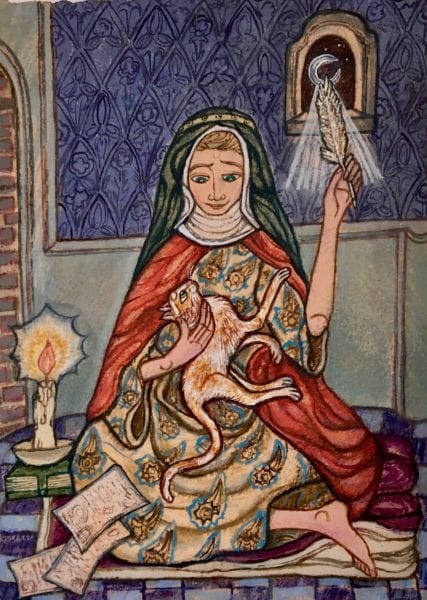 On May 13th – the feast of Julian of Norwich – I will be leading a Zoom mini-retreat on Julian and Margery Kempe with Mary Sharratt whose new novel Revelations about these two remarkable women was published last month. I am delighted to share this reflection from her on The Via Feminina: Mysticism as a Female Path:

Women have been side-lined and marginalized in every established religion in the world. Even in alternative spiritual movements, male teachers and leaders abuse their authority over their female students and followers. When our institutions and communities fail us, we have no other choice but to look within for the answers. We are not alone in this–we follow in the footsteps of a long line of female seekers and mystics who contemplated the deep mysteries of the soul on a path of inner revelation.

Medieval Europe saw the rise of female mystics, not all of them cloistered nuns. The beguines started a women’s spirituality movement based on women of diverse backgrounds living and working together without being under the auspices of a religious order or taking permanent vows–they could leave their all-female community whenever they wanted. Not all beguines lived in these communities–some embraced a wandering, mendicant life.

One of the most famous beguines was the mystic Marguerite Porete who wrote a mesmerizing book, The Mirror of Simple Souls. Written not in ecclesiastical Latin but in her own vernacular Old French, her book describes how in deep contemplation we cease to exist as separate beings and merge with God. Her book was declared heretical and Porete was condemned to burn at the stake in 1310. Her Inquisitor denounced her as a pseudo-mulier, a fake woman, whose book was “filled with errors and heresies.” Yet she refused to recant her beliefs or withdraw her book. “They can burn me,” she said defiantly, “but they can never burn the truth.” A contemporary chronicle reported that the crowd was moved to tears to witness how calmly and courageously she faced her execution.

One of the most idiosyncratic mystics of the late Middle Ages was neither nun nor beguine, but a desperate housewife and failed businesswoman from Bishop’s Lynn in Norfolk, England. Margery Kempe (c. 1373 – after 1438) is the subject of my new novel Revelations, to be published in April 2021 by Houghton Mifflin Harcourt.

After her attempts to run her own brewery and horse mill failed, Margery had reached her breaking point. The mother of fourteen children, she had endured many years of what we would now recognize as marital rape. Margery just wanted her husband to leave her alone, but canon law upheld his right to sexual congress without her consent. Solace came in the form of her visceral visions of Christ.

Since divorce wasn’t an option, she traveled to nearby Norwich to seek spiritual counsel from the anchoress Julian of Norwich, one of the greatest mystics of all time.

Forty years before meeting Margery, Julian had a near-death experience in which she received a series of divine visions. She spent the rest of her life unpacking them in her luminous book, Revelations of Divine Love, the first book in English written by a woman. In these pages, Julian bears witness to an unconditionally loving God who is both Mother and Father.

Upon meeting Margery, Julian offered radical counsel. She told Margery to trust her own inner guidance and not worry too much about what people thought about her. And thus, with Julian’s blessing, Margery literally walked away from a soul-destroying marriage and became a globe-trotting pilgrim-preacher and rabble rouser. Her travels took her to Rome, Jerusalem, and Santiago de Compostela, and she had many adventures on her way, including several heresy trials when she returned to England. This in an age where it was a perilous and rare thing for a woman to travel at all, let alone without her husband or male relatives. Little wonder the authorities assumed Margery was up to no good. She preserved her story for posterity in The Book of Margery Kempe, the first autobiography written in English.

Though cloistered Julian and free-roving Margery might seem like polar opposites, they complement each other. Together their lives and work form a Via Feminina, a distinctly female path to the divine.

Julian reveals the path of deep focus and cloistered solitude that nonetheless allowed her to be accessible for seekers in need of her open-hearted counsel. Margery offers inspiration for those of us who seek to live as contemplatives in the full stream of worldly life with all its wonders and perils. Like us today, both women lived in an age of pandemic and social unrest, yet both bore witness to the divine promise that ultimately all shall be well.

The mystic path is open to everyone. All it takes is setting aside time each day for some form of meditation or contemplative practice. We might not emerge as radical visionaries like Julian of Norwich, but this simple act will infuse our lives with a sense of divine presence, a numinosity that will radiate through our every seemingly mundane task so that each meal we prepare, each essay we write, each garden we plant becomes a prayer, an offering.