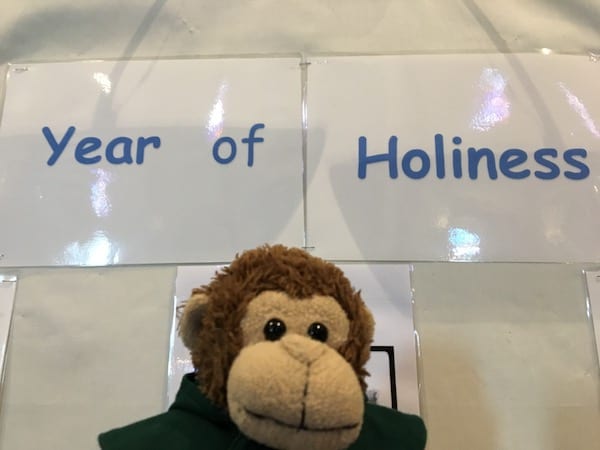 Hello, again, everyone! It’s me, Hildy the Abbey of the Arts’ adorable mascot. (John added the “adorable” bit there. I don’t want ye thinking I’ve got Notions. But thank you, John. I’ll do my Irish best to accept the compliment.)

But speaking of Irish . . . today’s expression means “far away cows have long horns.” It’s another way of saying the grass is always greener on the other side of the fence. Only here in Ireland, the grass is always as green as it’s goin’ to get, wherever ya go and regardless of what side of the fence you’re on. So, cows it is. Besides, so much of Irish history/mythology has to do with cow envy and cattle theft . . . this just makes so much more sense here.

Now I don’t like to be the jealous type, as I try to be very grateful with my life (Thank you, Brother David Steindl-Rast) and do feel very blessed. However, I wish I had grown up in a thatched cottage.

It’s not that I long for ye olde tymes or anything. I know life was hard back when most people in the West of Ireland lived in them. I just love the look of them so much. I grew up down the lane from a woman (to protect her privacy, we’ll call her), Granny Privy who had a lovely thatched cottage that some of us would visit and play in . . . and on top of, in some cases. (That case would be me and my siblings.) But Granny Privy didn’t mind. We’d just sit up there and enjoy the view. We weren’t messing with the thatch or . . .

(Good point, John.) Maybe I should back up and explain a bit about thatched roofs and life in those traditional cottages.

Thatched roofs are made out of thatch. That is reeds or grass, depending on the local flora and what building materials were available at the time. Here on the mainland, thatch is traditionally made out of reeds, but out on the Aran Islands they are made of grasses. This means that out on the islands, where there’s more wind and rain, the roofs need to be replaced about twice as often. In the east of Ireland, where the weather is nicer (if not as dramatic and majestic) the roofs can last for well over a decade. This is one reason you don’t see a lot of thatched roofs anymore. It’s expensive and time consuming to keep replacing. Now the Irish government does provide a stipend to help people maintain their thatched roofs, but good luck finding a new one. (Actually, there is a new one near us here in Galway City; but more on that later.) Insurance companies won’t insure a building with one, because of the obvious fire hazard (I’ll get to the open fireplaces in a minute). Some people will built a tin roof and lay thatch on top of that, like a hotel in southern County Galway that likes to claim to have the largest thatched roof in Ireland. But it’s not a “real” thatched roof.  You see, real ones are just tightly wound bundles of reeds tied together and laid over a wooden frame. It keeps the rain out by funnelling all the run off down to drip off the ends of the thatch before it drips through to the inside of the cottage. If the building is too wide, the rain will leak into the house. But the real trick, the beauty hiding in plain sight of a thatched roof is along the ridge of the roof. How the thatched is laced together along the top is everything. And if you look closely (or are sitting on top of it), you’ll notice that each master thatcher has their own unique way of doing it. It’s a kind of signature that you can recognize, so those in the know would be able to tell who put the thatched roof on.

But the thatched roof is only one of the traditional aspects of thatched roof cottages. There’s also the half-door. You see, the English used to tax buildings based on the number of windows homes had. The more windows, the higher the property tax. So, the Irish started boarding up windows (seriously, there are some VERY nice Edwardian houses in Dublin that still have bricked over windows) or just not installing them. Most thatched cottages in the West had one window in the wall opposite the front door, and the door was cut in half. That way, you could open the top half and create a second window without being taxed for it. Granny Privy said there was a second, added benefit. She said it was a great way to keep the children inside and the animals out. Or, “if mom was having a rough day,” she’d say the bottom half of the door would keep the children out and the animals in. (Young and/or ill animals were often kept inside anyway for warmth and closer care.) An open half door was also a sign to neighbours that visitors were welcome.

On a side note, John says his Irish-American mom had his dad put in a half-door on the baby’s room in the house he and his sister grew up in. This was obviously long before the invention of baby-monitors . . . because John is OOOLD. ;-) (John laughed as I said that and he’s the one who typed it and left it in, so . . . we’re good.)

Now once you’ve stepped over the threshold (named after the little bit of wood that was put across the bottom of the door opening to keep the thresh inside the house, which was sometimes used if one couldn’t afford flooring and didn’t want to be walking around in mud inside one’s house) . . . in some instances, hopping through the open half-door . . . you were in the main living room / kitchen / dining room / spare bedroom. The main focus was the open fireplace that was kept lit throughout the year. Even at night the embers would’ve been covered over to smoulder and immediately be rekindled in the morning. There’d be a couple of metal arms that would swing back and forth to hold pots and pans over the fire or be pulled away. There is usually a stone or brick shelf next to the fire for baking bread. And a place to sit next to the fire to keep warm or tend the cooking food. That’s where Granny Privy would sit and tell us stories or sing us songs. We’d have to tell our own stories or play some music. That’s where I first learned to play the bodhrán, from the one hanging on Granny’s wall.

Oh, that’s another thing! There’s always things, just not pictures, hanging on the wall. Usually a crucifix (often a “Penal Cross” – a cross with short arms, so it could easily be hidden up a shirt sleeve or down a trouser leg if the British authorities popped in to see if you were practicing Catholicism back when the Penal Laws punished the Irish for doing so). In more recent years, you’d see a photo of the pope (not always the most current one, but the family’s favourite one), a picture of the Sacred Heart of Jesus, Mother Mary, and John F. Kennedy (treated almost saint-like by many Irish). But there’d be all sorts of tools and implements and instruments hanging on the wall or from the rafters. (Did I mention there wasn’t a ceiling inside the cottage? You could look up and see the underside of the thatching.)

Off to either side there’d be bedrooms, sometimes only one if the family was particular small and/or poor. In Granny Privy’s cottage her bedroom did have a ceiling and the space above was used for extra storage, accessed by a ladder in the living room. But the other bedroom didn’t have a ceiling, so the bed in there had a canopy (to keep creepy crawlies that might be living in the thatch from falling on ya while ya slept). Granny’s bedroom shared a wall with the fireplace, so it was warm . . . or so she told us. We weren’t allowed in and we didn’t try . . . not for want of wanting to. But she was good to us and like I said, she likes her privacy.

I know it’s weird to be nostalgic for an era I didn’t live through myself. And I know I’m being naïve about the difficulties of living in a thatched cottage, even with today’s modern conveniences . . . but there’s something about sitting around an open fire place with friends and family that just appeals to me.

Now before I go, I promised earlier to mention a new thatched cottage near me here in Galway. Christine & John’s place is just across the road from the Claddagh (which is the oldest part of Galway . . . having been a small Irish fishing village before the Normans set up a walled city across the river and called it Galway). In the Claddagh there’s an art and heritage centre, called Claddagh Designs. And this centre, a couple of years ago got building permission to expand and they expanded by building (according to the original tradition) a thatched roof cottage, called Katie’s Cottage! Nobody lives in it (which is why I think they got around building restrictions and insurance issues). Anybody can go visit it. They hold small theatre events there. It’s really cool. And if you’re into THAT and happen to be in the Galway area (with a large group), you can book a tour out at Cnoc Suain. It’s a restored Irish farm in the wilds of Connemara, with a few thatched cottages, that’s run by a retired school teacher and biologist who teach about Irish culture with a cooking demonstration, a mini-lesson about the bogs, and short Trad concert that ends with some dancing. It’s brilliant!