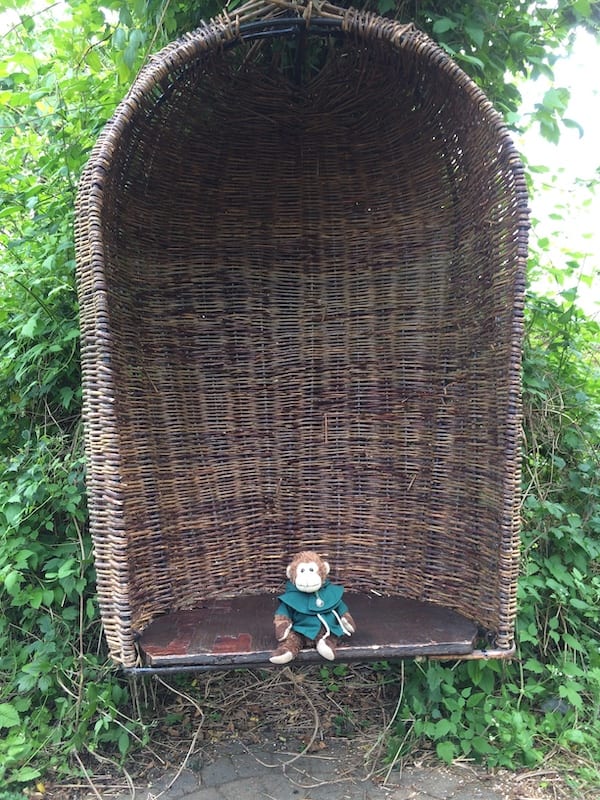 Hello fellow pilgrims and monks! It’s Hildy, again, with another story . . . or rambling. Whichever. I enjoy talking and John at least says he likes taking dictation, so here we go again.

Today’s Irish phrase means “Craic and Music.” The first word really doesn’t have an exact English translation. As I’ve mentioned previously, it’s got nothing to do with the drug crack-cocaine. John tells me I defined it as “mischievous fun and entertainment, usually good conversation and even better company.” I’ll stand by that working definition. It can also be used a catch-all excuse to do something (usually foolhardy), as in “sure, why not; it’ll be good craic.” But I’m here to talk about the second word more than the first.

You’ll see the phrase ‘Craig agus Ceol’ on signs above many a pub door. It means that they have live music there, often Trad Music (that’s short for Traditional Irish Music). But I would warn you against pubs that have huge signs that read “Traditional Irish Pub,” as they’re often tourist traps and really play up the ‘Paddywhackery.’ (OK. Let me back up here. Paddywhackery is a term we use to describe over-the-top Irish stereotypes – shamrocks, leprechauns, rainbows, pots of gold, etc. We Irish tend to use it in reference to how we’re portrayed in American culture – think just about ANY St. Patrick’s Day in the States – but also tend to dip into for the American tourist dollar. After all, there’s a leprechaun museum in Dublin and an Irish tourism company with green buses called “Paddy Wagons” . . . which actually isn’t that offensive here; that’s America’s baggage.)

But speaking of negative Irish stereotypes, let’s talk about Irish pubs and alcohol. Yes, there is a problem with underage and/or binge drinking in Ireland. But not to sound defensive . . . what country doesn’t? I just don’t know why Ireland gets saddled with the stereotype of being drunks, when most other countries often partake in too much, too often. I suppose the fact that a beer that shall not be mentioned here is Ireland’s biggest export and practically our nation’s corporate sponsor doesn’t help. I suppose part of it also comes from a misunderstanding of what a pub is supposed to be.

Pub is short for Public House and is NOT a bar. A bar is exclusively for adults to drink alcohol in. But a pub is . . . it’s kind of the village living room. There’s often food served. There might even be a grocery and/or hardware store attached. Earlier in the day, families with children are welcome. Many an Irish child will be seen running around a pub on a weekend afternoon with a fizzy orange drink and bag of crisps, while parents watch the match on the telly and catch up with neighbours. Why Club Orange and Salt & Vinegar Tatyo Crisps is the smell and taste of this monkey’s youth. All that’s to say that pubs, unlike bars, are not for getting blind drunk and making a fool of yourself in.

A good pub is about community and in Ireland that means music.

Nowadays, you’ll hear all sorts of music in pubs. Many visitors to Ireland are surprised to find out how popular Country/Western music here. I also know a couple of people in a heavy metal band that use traditional Irish songs in their melodies and sing in Irish. But you won’t find them in a playing in a pub. What you’ll likely encounter is a Trad Session. Some pubs will pay some musicians to come play a regular set either every day or every weekend. Other times it’s entirely spontaneous. Even when there are regular musicians, others can join in. Bring your instrument, know some tunes, be willing to improvise, and wait to be invited to join the music.

Back home in the local (short for local pub or the one you usually frequent) there was a man who would show up every Friday night with his fiddle case. He’d sit at the bar, place the case on the counter, and order a pint. Away he’d sip as the music played. Eventually one of the musicians would ask him to bring his fiddle over and join them. He’d say no and continue sipping his pint. But when he was asked a second time, after he’d finished his drink, he’d be straight over . . . even as he continued to protest. He’d always play the same two songs, in the same order each time, and then go back for a second pint. It was part of the tradition of the local Trad Session.

Now one other bit that John really wants me to explain has to do with shushing. You see, when there’s a bit of singing to be sung, especially an a capella song (my favourites are the sean nós, which means “in the old style”) or a particularly tragic ballad (most of them are tragic, some more so than others) and someone stands up to do the singing, someone else will shush the crowd. It’s a pub, after all, and there’s lots of noise, side conversations and whatnot. So if someone’s going to stand up and sing, without a microphone or such, everyone needs to be quiet so they can be heard. But John says he was shocked the first time he witnessed this first hand. The silly American thought the person doing the shushing was going to start a fight . . . because apparently that’s not acceptable in America, shushing strangers. But how else are you going to get everyone else quiet and won’t everyone appreciate knowing a quiet song was about to heard, if everyone hushed?

Hey, since everybody’s there for the music . . . just keep it down a bit. Plenty of time to chat later. You’re not saving the world, we’re all just out for a bit of fun with good company and good music. Speaking of which . . .

There are a lot of different types of instruments that are used in Trad Music today. You’ll hear a tone of fiddles (John and I are still trying to figure out the difference between a fiddle and a violin, just know that we call ‘em fiddles here). Flutes and whistles are also very popular. Most Irish learn to play whistles in school, but it’s not a kids game when you get to the big leagues. There are professional whistle players who travel with dozens of different whistles in different keys of different lengths and materials and . . . it’s a whole thing. (Just don’t get my uncle started on whistles, because he’ll talk your ear off.) If you’re really lucky you’ll get to experience an uilleann pipe. It’s the Irish version of the better known Scottish bagpipe. (There are actually many different types of bagpipes. The Welsh bagpipes are lovely, too. But we don’t have time for all that now.) The uilleann pipes really have to be played sitting down and take A LOT of coordination. There’s a bellows under one arm that you pump with your elbow and fills up the air bladder that’s under your other arm that you squeeze slowly with your other elbow and that blows air through the pipes that you play with your fingers, while you also use your wrist to play different keys. (I’m sure I got part of that wrong, but you really have to see it to understand it . . . and maybe not even then.) I’ve heard it takes at least eleven years to learn to play it with any sort of proficiency at all and you’ll be mad as a hatter by the end of it (and it helps if you were a bit crazy to start). Occasionally there’s a harmonica player. And of course there’s always some guitars and banjos in the mix. (You’re probably beginning to notice a theme – small, easy to carry instruments. But that’s not entirely true.) The harp might be Ireland’s national symbol (and blue our official national colour, not the green and the shamrock), but you’re rarely see one played in a casual Trad Session. And while I love the accordions and concertinas, the bodhrán is my instrument of choice. It’s a percussion instrument, a cross between a drum and a tambourine. It’s held in one paw . . . or hand . . . that lays on the “inside” of the instrument and regulates the volume and tone of the sound. The other hand usually holds the cipin (or tipper), but some play with their bare hand. The tipper is a two-headed drumstick. You hold it in the middle and strike the face of the bodhrán in a variety of rhythms.

So if you ever find yourself in Galway on a night out and you pop into a pub for a good auld Trad Session, you just might want to mind the hush. And who knows, maybe you’ll hear a small monastic monkey singing a sean nós before breaking into an amazing solo on the bodhrán.