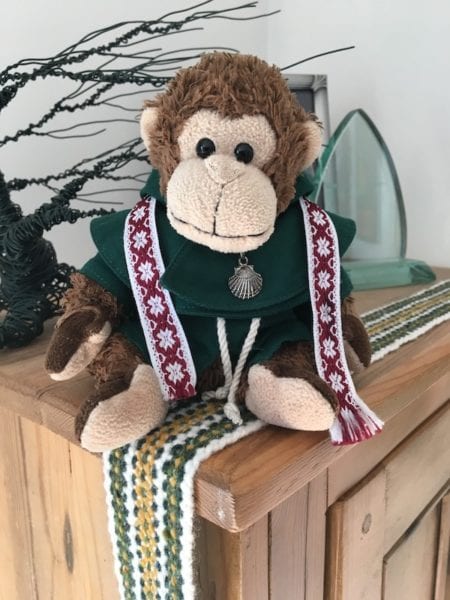 Greeting fellow pilgrims! It’s Hildy again. And today’s Irish word is “An Nead,” which means “The Nest.” It’s what Christine and John named their . . . our . . . apartment. (You call them condos in the States, but rent or own, they’re all just apartments here in Ireland.) I mention it because it has to do with what I want to tell ye (that’s plural for you, or y’all as some of you might say). As a small monkey who grew up in a very flat area of Ireland with very few trees, I was always a bit scared of birds. I was quite naturally worried that one might scoop me up and take me away. (It’s only a “phobia” if it’s unreasonable and that’s not unreasonable.) It didn’t help that Seagulls regularly stole my lunch straight out of my paws in the school yard. So moving to live on the third floor (that’s the fourth floor in America) of a building in the city centre and being able to look down on birds . . . it was an eye opener, for sure.

After getting over my initial hesitation, I decided to be bold and get to know some of my feathery neighbours. I started by leaving seeds out for the smaller Sparrows and Robins. They weren’t great conversationalists, just a lot of chatter about the weather. That’s not really an unusual topic of conversation here in Ireland (most discussions start there), but most of us eventually talk about something else . . . eventually. Two interesting facts though – they don’t mind the rain so much as the wind (being wet is something we all get used to here, but being buffeted about by the constantly changing wind is a particular issue for small birds) and Red Breasted Robins, despite the actual colour of their chest feathers, aren’t called Orange Breasted Robins . . . are ye sittin’ down for this one . . . because the English named them BEFORE the tropical citrus fruit was “discovered” (ie – found by Westerners for the first time). That’s right! The colour is named after the fruit and not the other way around. Before the golden orbits of citrus goodness were “discovered” by Western explorers, what we now call orange was just another shade of red to them. (Weird, right?)

The Starlings are very fascinating to talk to. Or . . . they were at first. They either will give you hours of play-by-play analysis of their latest murmuration or they’re preoccupied by their very demanding and noisy chicks (no offense – Starling babies are super cute and Starling parents are super devoted . . . I’ll give them that). However, the discussion between the Starlings about who-did-what-when during the latest murmurations are SUPER fascinating. The tricky bit is keeping up with their ever-changing slang for the different manoeuvres. Each generation seems to have their own lingo and slang and so keeping up with what they’re talking about season to season is difficult for non-Starlings. They don’t mean to be exclusive, it’s just the nature of their interactions, ever shifting and changing. But what I find most odd is that they never, EVER discuss what they will do next time. It’s all improv and they refuse to choreograph any of it in advance.

To help with my interaction with the small birds, Christine and I put out bird feeders. Our little terrace soon became THE go-to spot for all the little birds. Unfortunately, word got out and soon larger birds showed up, too. Now, we’re fortunate that the terrace is too narrow for Seagulls to land (although we’ll occasionally get an adolescent Seagull who kinda gets stuck). But the problem really was the Pigeons. And Pigeons are jerks. I know that’s not nice to say and I really do try to be charitable and understanding. But . . . there’s a reason they fly through pedestrian zones at about 5 to 6 feet off the ground. They *could* fly WAY higher. They could fly around. They could probably waddle in between everyone’s feet, as they are clever and agile creatures. They just like the looks on human’s faces as they zoom past your faces. It’s a jerk move and they don’t grow out of it as they grow older. But all that’s to say, the pigeons started crowding out the smaller birds and eating all the bird seed. Christine ordered a special bird feeder that had a kind of cage around it to keep the larger birds out. But tiny birds are slobs and scattered enough of the seeds to keep the pigeons coming back. And they just pooped everywhere. It got to the point that Sourney and I didn’t want to go out there anymore. It was hard talking Christine into giving up the bird feeder, but John voted with us and she was overruled 3-1. (Don’t worry; the Pigeons are very resourceful and have no trouble finding food elsewhere to share with their young . . . that outsiders rarely ever see.)

Now not all the birds came to visit or are willing to talk to me when I go about town. The Ducks are always in too much a hurry to pay attention to a little monkey in a monk habit. Fair enough. The Cormorants, a European version of the infamous Canadian Loon, have their own version of “ghosting.” They’ll be floating on top of the water, as they are apt to do. And they’ll start a conversation with you, but then . . . SPASH! . . . they submerge into the water and are just GONE. They can stay submerged for AGES and usually pop up far, far from where they were when you were talking to them. The Herons (Christine’s favourite) just flat out ignore you. It’s like their deaf and blind . . . but they aren’t; they just like their privacy and will ignore you until you figure it out and leave them alone. (Fair enough, I suppose.) However, they are better than the Swans who will size you up (the way they tilt their heads and look at you sideways with one eye is VERY intimidating) and decide on whether or not they’re going to give you the time of day depending on the likelihood of you giving them food. It’s just rude . . . but they have cause to be over protective of their young.

But what makes up for it are the Corvidaes! Oh, how I adore them all: the Ravens and Rooks; the Crows, both Hooded and “regular” ones; the Magpies and Jackdaws. Each with their own uniqueness, even if it took me ages to tell them apart. (OH! Did you know that Crows have been found to be able to identify different human faces? And if you mess with them, they will not only remember you . . . I hope ye are still sitting down . . . they will teach other Crows to dislike you and they’ll all gang up and attack you, even the ones who never saw you before. Don’t mess with them!) Ravens are the largest of the Corvidaes and solitary creatures. Crows are slightly smaller and more social, really good craic! Rooks are about the same size as Crows, but have much more conical-shaped beaks which are AMAZING at cracking nuts open. (OH! Did ye know that Ravens and Crows will use vehicle traffic to help crack open nuts? They’ll intentionally drop things on roads and wait for cars to run them over. Crows in Japan even take advantage of traffic lights to time dropping nuts and swooping in to eat them.) Where was I . . . ? Oh, the Hooded Crows are very dignified. They look like they have little grey vests on. And they love to debate with Magpies if the low contrast black-and-grey or high contrast black-and-white is prettier. I made the mistake of getting involved once, by suggesting that Magpies look blue-and-white, in certain lighting due to the oil on their feathers and . . . I got the silent treatment from everyone for weeks. But my favourite Corvidaes are the Jackdaws. They are the smallest of this family (like meself) of birds. They have smaller beaks, proportionally, and have a ring of grey feathers around their heads that make it look like they have male-pattern-baldness. They call it their tonsure and . . . get this . . . love to nest in old monastic ruins! What’s not to love? Well, the fact that they’re not really city-birds, like the rest of them means I don’t get to talk to them as often. But, their more spiritual conversations (even more so than the other birds) are well worth the wait. (Bring a picnic, heavy on the seeds to share, to an ancient Irish monastery and you’ll have a great day out!)

But of all the things I’ve learned about birds these last few years, living in An Nead, was what I learned about myself. (Sorry. A bit “Afterschool Special” there, but . . .) What I learned is that I was wrong to harshly judge the Seagulls. (Maybe I’ll have to give those jerky Pigeons another chance, too.) Sure, some of them used to steal my school lunches. And I did see a very large one eat the remains of a cooked chicken leg in one giant gulp while staring down a group of terrified humans and one really freaked out monkey. But I wasn’t appreciating them for who they are. I never really observed them in THEIR environment. If you want to really, truly know a Seagull (and you should; they’re majestical!) go out on a really, truly stormy day – a day every other creature is tucked away somewhere safe from the lashing rain and swirling wind – and watch the Seagulls play.

Honestly, it brings a wee tear of joy to my eye just thinking about the Seagulls effectively alone in the world just swooping and diving and dancing and laughing on the wind. They aren’t land birds; they aren’t sea birds; they’re Storm Birds! They should be called ‘Stormgulls!’