Hildy Tales One: Dia dhuit, is mise Hildy! by John Valters Paintner, Your Online Prior 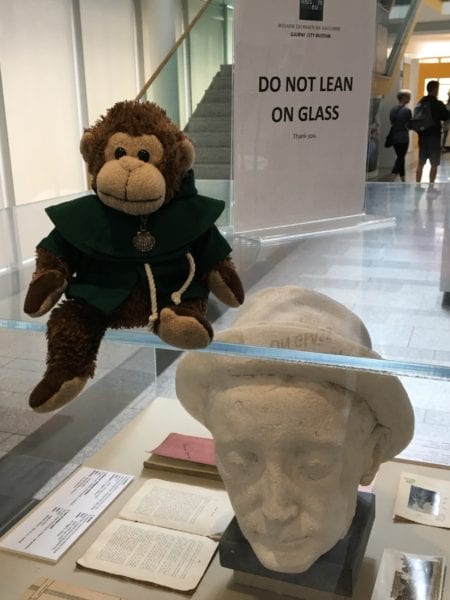 That’s Irish for “Hello, my name is Hildy!”

Well, more literally, it’s “Greetings from God, my name is Hildy!” But there’s a whole call-and-response to this traditional Irish greeting that involves the second person adding Mary’s name to the greeting and then the first person adding a favourite saint’s name to God and Mary and then the second person adds another local saint to the list and . . . It can go on for a long time. And that’s before ye get to talking about the weather, which is just a warm up to the real conversation.

Speaking of conversations, where was I? Oh yeah, greetings!

I’m not a native Irish speaker (although I learned some in school). My preferred way of saying hello to people on the streets of Galway is either “What’s the craic?” or my personal favourite “What’s Strange?” But again, it’s a call-and-response and I can’t hear you, because you’re reading this after I wrote it.

I won’t get too far into it now, because Irish and Hibernian-English are great ones for verbosity (that means A LOT of words). There is no such thing as a short answer in Irish. Despite some modern adjustments for political badges, there is technically no word in the Irish language for “Yes” or “No.” We like our words here in Ireland and we’ll use as many as possible (even if they’re English or some other foreign words). If nothing else, it means more time spent with family and friends, telling stories and having the craic (a word meaning mischievous fun and entertainment, usually good conversation and even better company).

But I’m not here to give a lecture. And John, who’s typing this up for me says I’m rambling, again. He says I’m more prone to “monkey mind” than even he is and . . . Right. Sorry. I’m doing it again.

So, let me get back to introducing myself and then I’ll tell you a story about a wee statue with a long history that I think gives a good insight into the city I call home.

Anyways, as I was saying before I interrupted myself (twice): I’m Hildy and I’m the mascot for the Abbey of the Arts. I’m from the little town of Monks Town in County Roscommon, just east of County Galway. I’ve travelled the world a bit, France and the States mostly. But I have lived most my life in Galway City. I was working in a charity shop on Sea Road in Galway’s beautiful and vibrant West End when I met Christine and John. It happened to be my birthday (September 17th and the feast of St. Hildegard of Bingen). Christine and John saw me working in the window and popped in to say hello. And as I’ve explained above, the conversation meandered on for a while. Eventually they mentioned that they had been looking for a good mascot for their online abbey and I just happened to have been on the lookout for a fulltime gig.

It was a match made in heaven!

Now since I am an Irish monkey . . . or more accurately these days . . . monk-ey, I’d prefer not to talk too much about myself all at once. So today, I’d like to tell you about Pádraic Ó Conaire and his many statues.

Pádraic Ó Conaire is one of Ireland’s greatest modern Irish language writers. He was born in Galway City in 1882 and died in Dublin in 1928. In his short 46 years, he contributed greatly to Irish literature – as a journalist, a poet, and an author. John says I don’t have time to get into all his writing and that ye can Google more about him and find some of his work online if yer interested. But suffice it to say that not only is his work still taught in Irish schools, he routinely shows up on exit exams, and (best of all) he has multiple statues of him, just in Galway City. Or rather, he has multiple versions of the same statue in several spots around town. And the history of this statue, in all its guises, is perhaps one of the best ways of understand Galway City.

The original statue was first erected in 1935, less than a decade after his early demise. It was dedicated by the (in)famous Irish politician Eamon de Valera (don’t get me started on Irish politics; John says he doesn’t have time to type out all my opinions on the subject). It was placed prominently in Eyre Square, the social heart of the city. The park is near the bus and train terminal, so that most people returning home and visitors walk through it would see a life-size, stone statue of the great Pádraic Ó Conaire. The Square was rearranged several times throughout the years and JFK gave a famous speech there in 1963. But Pádraic remained, a silent and humble reminder of the city’s literary legacy.

That is until 1999 when the head of the statue was cut off and stolen. (The decapitation of statues is a minor trend in Ireland.) The four men responsible were eventually caught and the head returned. (Actually, I think the lads responsible eventually sobered up and returned the severed head and turned themselves into the authorities.) It cost tens of thousands to repair the statue and it was moved to the new city museum for safe keeping.

The problem was that the city museum is over by The Spanish Arch by the Corrib River and isn’t as central as the square. This means not as many people visit it or pass through on their way somewhere else. And so a bronze replica was made of the original stone statue. So now, the original stone Pádraic is in the museum and a new bronze Pádraic is back in the Square, as of last year in a dedication ceremony by our current President, Michael D. Higgins.

But these aren’t the only two statues of Pádraic Ó Conaire. In between the old and the new statue, a twice life-size Pádraic Ó Conaire was made of fiberglass to be used in a parade, because the people wanted to see Pádraic. He was always a man of the people. The museum displays him prominently and the staff takes great care of him, but he and his work can’t be contained.

Well, sort of. You see, after the parade, the large fiberglass Pádraic Ó Conaire sat in a warehouse collecting dust in a corner for several years. But then someone had a great idea (it’s what we Irish do best)! One of Pádraic Ó Conaire’s decedents, a nephew lived in Galway and ran a B&B with a large garden out back. It’s just not any B&B, but the one Christine and John have used for their Galway based pilgrimages and so we got the inside scoop on this one. The people who made the large fiberglass Pádraic Ó Conaire dropped it off in the park next to the B&B. Then the owners (and relatives of Pádraic Ó Conaire) asked some passing lads in the park to help hoist it over the tall fence. The young men were prepared to strain and show off their muscles lifting the massive statue . . . that is hollow and quite light. They almost damage it when they ended up flinging it over the fence.

BUT THAT’S NOT ALL! (Sorry for yelling, but this bit has me very excited!) In researching this article (well, getting John to photograph me with all the statues of Pádraic), we spoke to a friend working at the museum and we have learned of a fourth (4th) Pádraic Ó Conaire statue!

So, on the advice of our friendly neighbourhood museum employee, Christine and John drove me out along Dyke Road, past the glass recycling bins and past the Black Box Theatre and under the highway and past the Menlo Castle and past a small church with a Mary grotto and there . . . on the side on the road, on the top of someone’s front garden wall was the Pádraic Ó Conaire statue that’s just my size! (Now I know how Goldilocks felt.)

And this is why I wanted to share this story first. It is so much a glimpse into Galway. It is a city of artists. It is a city of mischief. It is a city of the past and the future mingling in the present. And it is a city of mystery that one can never fully know. (Because now that I know there are four Pádraic Ó Conaire statues, I know there’s got to be more!) There is always something new to learn about Galway; it’s why I love living here and calling it home!