I am delighted to share another beautiful submission to the Monk in the World guest post series from the community. Read on for Michael Kroth’s reflection, “Haiku Drop.” 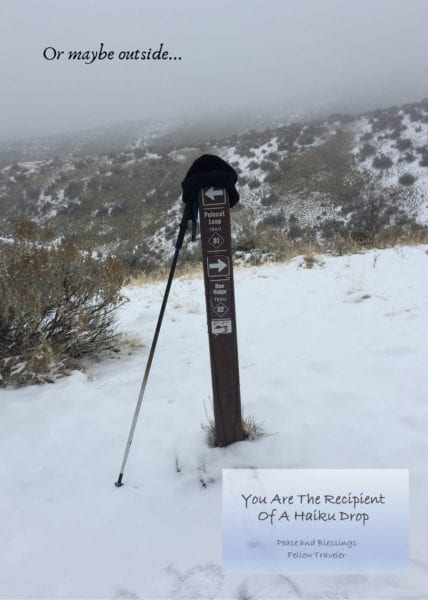 Wind outside my house
Cold breeze, sharp slap bites my cheek
My eyes see nothing

I wrote my first haiku during a retreat in McCall, Idaho. I began reading The Art of Pausing: Meditations for the Overworked and Overwhelmed, by Judith Valente, Brother Paul Quenon, and Michael Bever that day, and followed their encouragement to write a haiku daily. On May 27, 2019 I finished reading the book – I had been reading one of their haikus, plus its narrative, a day – and by that date I had written 119 haikus. I’ve never looked back, averaging about a haiku a day since. In fact, I immediately began rereading The Art of Pausing on May 28th – one haiku, one day at a time – and the re-reading was as valuable as the first go-round.

I find the practice of reading a haiku each day, and writing one, to be relaxing, focusing, intimate, and a daily connection to what is most important in life. I generally write them in the dark or early light of morning.

Along the way, other friends of mine have also begun the practice. We began meeting once a month and sharing one haiku with each other, discussing the meaning of each, again as The Art of Pausing encouraged.

Since starting, I have learned more about haikus, both by reading and by writing them. I’ve read Matsuo Basho’s masterpiece, Narrow Road To The Interior, for example. I am currently reading a haiku a day, with its narrative, from a wonderful book called Haiku Mind: 108 Poems To Cultivate Awareness & Open Your Heart, by Patricia Donegan, which features haikus from recent poets and the masters of yore. I now know that a haiku with accompanying prose may be called a haibun. 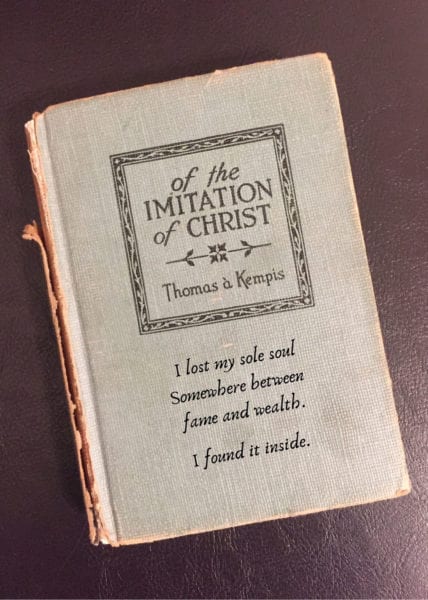 The practice of writing a haiku a day was valuable enough. Adding a monthly haiku exchange with a small group of friends made it even more meaningful, but adding an anonymous, daily “haiku drop” to the mix has caused this practice to become a powerful part of me.

Each month I print numerous copies of the haiku I share with our little group. It is in the form of a card or a bookmark. The print does not have my name on it. I send it anonymously to an ever-growing, continually evolving mailing list. Some people receive them and easily guess that I am the sender. Most have never met or heard of me. Others might find a bookmark in a book or a card on a pew or either sitting in a display.

A few years back, I woke one snowy morning to find my sidewalk and driveway had been shoveled. I had not a clue who the Good Samaritan was. The result? I had to be kind to everyone in my neighborhood! Anonymous giving is not only a gift to the recipient, but to all the others who the recipient is likely to treat with a little more kindness.

I now have made it a practice to give something to another person, anonymously, every day. This gives me incredible joy. Usually, the gift is sent in the mail and I wake up knowing that someone will find something special, hand-addressed, and often with a personal but anonymous note of gratitude, in their mailbox. We have lost the art of hand-addressed envelopes.

How do you feel when receiving a personally addressed and written letter in the mail?

For several years I have felt the need to develop qualities of generosity. Being generous with large amounts money is not possible. I have always admired those who could make something – a piece of art, prayer beads, a shawl – handmade. Yet I have no known artistic or craft skills.

I can’t draw, but I can write. A little.

A friend of mine told me about “art drops”. I had never heard of them before, but apparently, they are popular. Someone creates a piece of art, perhaps a piece as simple as painting a heart on a rock, with a saying underneath, and leaves it somewhere – perhaps in a garden or on a path – for someone to discover and then to keep if they wish.

It’s an anonymous gift, personally crafted, the recipient is unknown, and so is the person giving it.  Love is added to the world.

As I began this haiku practice, I realized that I could modify the “art drop” protocol, such as it informally is, and send haikus anonymously. So I did. And so I do.

Each day someone opens an envelope or finds a card, from me. Hopefully, they smile. They wonder, “Who was thinking about me yesterday? Who cares for me in this difficult world? Who spent just a scootch of time for nothing in return?”

Nothing in return? I think not.

For writing haiku is a daily, personal, spiritual discipline. Sharing one anonymously each day is a gift to myself, to others, and to God.  For me, this is one way I can serve in a very small way as a monk of the world, in the world, and for the world.

To summarize, this practice has evolved from nothing and now it is a daily exercise. It has synergy on so many fronts – it develops friendships and collaboration, it is beneficial for mental, emotional, and spiritual health, which means physical health as well; and that’s just what I receive. Hopefully, the ripples go much further.

I never judge the quality of the haikus I write; my job is to produce one a day by connecting to my larger, legacy practice of contemplative prayer, journaling, and reading each morning. My job is to try to get to the essence of something quite profound, and to express it in seventeen syllables.

In that spirit, I have shared a haiku drop here, front and back, just for you.

Who knows where it came from!!!

Mystical? Mundane?
There’s both in any flower
Or piece of chewing gum. 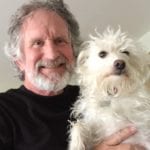 Michael Kroth has written or co-authored six books. His latest is Profound Living: Essays, Images, and Poetry. He curates the site Profound Living WithMichael Kroth. You can find it here: ProfoundLiving.live. He is Professor of Education in the Adult, Organizational Learning and Leadership program at the University of Idaho – Boise.