I am delighted to share another beautiful submission to the Monk in the World guest post series from the community. Read on for CJ Shelton’s reflection, “A Prayer for All of Creation.” 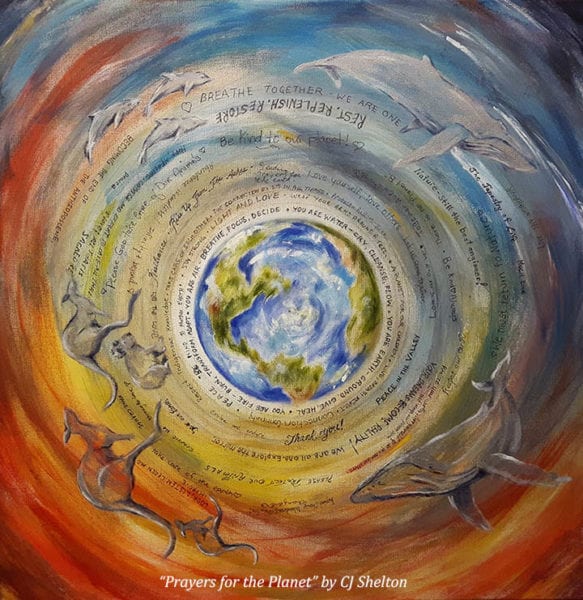 Living the quiet and contemplative life of an artist and “monk in the world” in Ontario, Canada, I am blessed to have each distinct and seasonal quarter turn of Nature’s Wheel influence both my art and my prayers.

In the winter months, those prayers are often for the birds, animals and trees that must endure the harshness of our Canadian sub-zero temperatures and snowy storms. This winter though, it was another country, Australia, and the devastating loss of habitat and animal life from wildfires that became my focus.

My spiritual practices are a blend of the Celtic/Anglo Saxon traditions of my British ancestors and the Algonquin tradition of eastern Ontario I am aligned with through shamanic Medicine Rites. Seeing the natural world as sacred is a fundamental feature of both Celtic and First Nations spirituality, so a love of nature is literally coded into my DNA.

As I watched helplessly in the face of Australia’s unfolding tragedy, I realized I could take action through my art by creating a special collaborative mandala for the winter festival at the arts centre where my studio is located. In both my art and work as an educator and facilitator, I use the circular format known as a mandala. Knowing a mandala acts as both a container and an amplifier of whatever is placed within it, at the very centre of the piece I painted our planet earth. I then “ghosted” images around it of Australian animals such as koala bears and kangaroos, as well as other creatures being impacted by environmental disasters. Finally, during the festival, I invited anyone who visited my studio to contribute their own thoughts and prayers by writing them directly on the radiating concentric circles drawn around the earth.

Prayers for the Planet is still a work-in-progress as my intent is to keep adding to it, expanding its circle of prayer to include not only the land down under, but all areas struggling because of climate change and other human-caused indignities. Prayer is powerful and I know the effects of such an intentional process can ripple outwards in incredible ways.

The ancient Celts recognized this power when they used the “circling” form of prayer known as caim, a concept I was introduced to through one of Abbey of the Arts daily emails. On doing more research, I learned that caim is Gaelic for “protection” or “sanctuary” and is derived from the root word meaning to “circle”, bend or turn. In essence, a caim is an invisible circle of protection that is created or drawn symbolically around the body to encircle the one who is praying, as well as anyone, or anything, they wish to include. The power of this prayer-form is that all who are placed within its sacred space can feel safe and loved, even in the darkest of times.

As I created this painting, I recognized I am praying a caim whenever I open Sacred Space and call in the Seven Great Directions of the Algonquin Medicine Wheel:  East, South, West, North and the directions of Above, Below and Centre. And I often extend that space beyond my personal circle to the community in which I live and to the world at large, both natural and human. By encircling a space much larger than myself I am including the entire vast and diverse web of life – the plants, trees, rocks, birds and other wildlife – of which I know I am fundamentally a part, as are all humans.

Such an invitation also pays homage to the numinous in nature – that which is mysterious, spiritual and, at times, even supernatural. It acknowledges that I am just one of many interwoven threads within our planet’s much larger web of wonders. Casting such an encircling prayer also creates a space and an atmosphere of expectation, a knowing that mystery and magic can, and will happen, because the whole of Creation is now a part of my caim circle. In this way, my caim becomes an eco-centric (not ego) way of praying that includes All My Relations.

Creating sacred space in this way is empowering and tangible. It is a way of acting intentionally in the face of the relentless bad news being constantly filtered through the media. It is a way of focusing energy through speaking aloud about that which I wish to see change. Having these words witnessed by Spirit solidifies them, making it more likely I will follow through with my own conscious actions in the physical realm to help manifest these changes … because thoughts become reality and when said prayerfully, their power cannot be underestimated. Belief PLUS action is the key to healing our world.

Given the times we are living in, I will continue to say a caim each season as it comes around and offer my prayer of protection for all of Creation. And each time I do, I will feel the waves of concentric circles rippling out from my own little sacred circle to merge with the prayers of others and, eventually with the greater Sacred Hoop of our planet, and beyond. By doing so, I am quietly doing my part as a monk in the world. Even though that part feels small, I know every prayer counts. And, most of all, I know that Creation will respond. 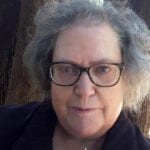 CJ Shelton is an Artist/Educator who inspires and guides others on their creative and spiritual journeys. Through her art, photography, writing and shamanic practice, CJ opens others up to the meaning, magic and mystery of the Great Wheel of Life. You can view The Art of CJ Shelton at DancingMoonDesigns.ca