I am delighted to share another beautiful submission to the Monk in the World guest post series from the community. Read on for Joni Sensel’s reflection, “From Monk to Mummy and Back.” 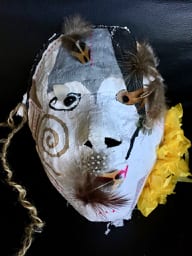 Monks have always interested me; my second novel is set in a tenth-century abbey, and as a long-distance hiker I’ve long considered myself a peregrina, not in medieval robes but in Gore-Tex. So when I discovered Abbey of the Arts a few years ago, I was immediately intrigued.

To explore my evolving identity as a monk in the world, I signed up for one of the Abbey’s five-day events called Awakening the Creative Spirit. The workshop became a way for me to secretly acknowledge my partner, Tony, who’d died abruptly a year previously and whose birthday fell during that week. I enjoyed the workshop immensely, but one activity especially bowled me over: Near the end of the week, we made plaster casts of our faces. I expected this to be among our least challenging projects. Hoo-boy, was I wrong.

My partner, Michele, would plaster me first. With a shower cap protecting my hair, I stretched out on a yoga mat and closed my eyes, feeling as vulnerable as a hospital patient. Plastic wrap protected my skin with only the tiniest gap at my nostrils for breathing. Michele began smoothing wet strips of plaster overtop.

When my eyes and mouth were sealed over, I thought, “Oh! This is like a mummification. I’m being prepared for the next life.” It wasn’t the first time the week’s activities had me thinking of symbolic deaths and rebirths. We were welcoming the emerging identities we’d try to capture as we painted our masks.

As the plaster stiffened, the mask felt increasingly isolating. I could still feel Michele’s fingers and soothing presence, but I couldn’t see, move, or even breathe deeply. The music in the room was trance-inducing. Trying to relax, I focused on each shallow breath.

And I thought about Tony. This loss of sensation, mobility, control—was it anything like what he’d felt as he died? I’d touched his face while I tried to revive him, not in these sweeping strokes but with great urgency. I imagined stroking his stubbled cheeks as Michele smoothed plaster on mine. This could be only the thinnest reflection of dying.

My heart ached intensely. Tears rose. No. Not now. Crying was one more thing I couldn’t do. If I got sniffy, my slim ability to breathe would be lost and I’d have to bail.

I gave her a thumbs-up. I can do this. It can’t be much longer. Pressing my hands to my overwhelmed heart, I tried to anchor myself to the music.

More warm, soothing hands touched my shins, feet, and hands. Our workshop leaders had a talent for reading emotion. Sensing my distress, they held me to the ground, a balloon—or a ghost—at risk of floating away.

The first teams done with their plastering began to speak above whispers, proof of life beyond my swirling mind and imprisoning mask. I wasn’t scared, just awash in emotion: curiosity and grief, uncertainty, gratitude for Michele’s tender help. After days spent expressing emotions through dance, those feelings were now trapped and roiling. Would my plastering never be done?

Light brightened beyond my eyelids. Good. Focus there. The clouds blocking the sun outside must have drifted. As I appreciated that glow, a sudden impression flashed—power, rushing just beyond my eyelids and my sense of self. It was like standing too close to a bison stampede: roaring, immense. That physical sensation struck me as a divine force, or maybe the flow of the collective unconscious. It was here, immanent, both reassuring and intimidating. I almost giggled into my mask because it showed me how utterly inadequate our conceptions of divinity are: We’re ants trying to understand a nuclear rocket.

With that, Michele finally lifted my mask off. Breathe. Try not to shake. Queasy, I wiped my face and focused on returning the favor for her. The cool glop of the plaster helped calm my trembling. Still, as soon as we’d finished, I had to escape into the woods. With the trees and Tony around me, I could finally cry.

Feeling like I’d been hit by a truck, I dropped flat to the pine needles, spread my arms, and let my emotions sink into the ground. Surrendering. And trying to understand what had happened.

After 10 minutes or so, one of our leaders appeared on the trail. A gift. Though this break in the schedule was her time off to recharge, Betsey kindly paused. She asked and then listened while I spilled my feelings about the mask work, which had veered so far from the lark I’d expected. After brief support and a hug, she walked on. I remained prone until the chickadees hopping through the leaves granted me enough energy to go find warmth and tea.

Though it took me days to recover from my pseudo-mummification, the experience pushed me closer to Tony. I consider it a not-very-near-death experience, one that confirmed a Divinity out there, an immensity both in and beyond our perceptions.

Monks and mummies share the assumption of such a Beyond. They also share a strong sense of purpose, a focus on approaching and experiencing the Divine that is helping me to find meaning after my loss. Together, they’re leading me forward, a hiking, art-making monk in the world who sees value in the mummy’s seclusion and darkness as well as in dancing and light. 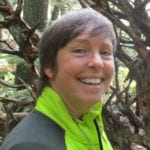 The author of more than a dozen books, Joni Sensel explores creativity and monkish adventures from her home at the knees of Mt. Rainier in Washington State. Visit her online at JoniSensel.com