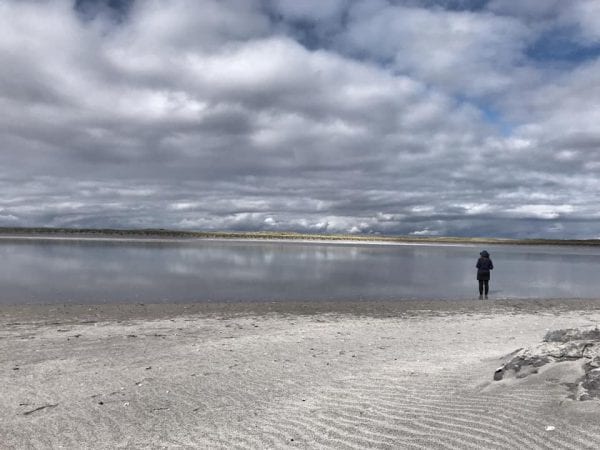 Mark 6:31-33
He said to them, ‘Come away to a deserted place all by yourselves and rest a while.’ For many were coming and going, and they had no leisure even to eat. And they went away in the boat to a deserted place by themselves. Now many saw them going and recognized them, and they hurried there on foot from all the towns and arrived ahead of them.

The sixth chapter of the Gospel of Mark begins with Jesus returning to his home town. He goes to the synagogue on the Sabbath and preaches to his old neighbours and relatives, people he grew up with. The community is astonished! But it’s not a good, amazed kind of stunned. What really shocks them is that such wisdom could come from someone they know, from someone who grew up in the same small village they did. They couldn’t get past the child they knew to take in the man he’d become. Ultimately, Jesus had to leave, as the people wouldn’t allow him to go about his mission.

And so Jesus decides to branch out by going to other villages. He sends the Apostles, in pairs, to villages around the region. Jesus sends them out with very little in way of provisions and tells them not to stay in a place if they are not wanted. The Apostles preach and heal and perform miracles, spreading the Good News of the Messiah.

Because of the miracles Jesus performs, rumours began to circulate that he was John the Baptist or perhaps even Elijah returned. Jesus is a local celebrity, growing in fame and popularity.

When the Apostles returned to Jesus and told him everything they had done, Jesus said to them: “Come away by yourselves to a deserted place and rest a while.”

Jesus, finding himself suddenly surrounded by a growing horde of admiring and even just curious crowds, must get away. He needs time to rest before he can continue. Jesus can’t be “on” all the time. It’s not good for Jesus or the Apostles. Silence and solitude is needed.

There are several examples of Jesus trying to get away from the crowds, away from the noise and confusion of civilization. Even before he began his public ministry, Jesus famously went alone into the wilderness for forty days.

But what is remarkable about this particular incident is that Jesus tells his disciples, fresh back from their own missionary work, to go on retreat. Jesus tells his followers to come away with him to a quiet place and rest.

It is a reinforcement of the importance of silence and solitude. Rest, true rest, when one is alone in the silence is more than just a nice and relaxing thing to do. It is something one’s body and soul needs. It is a craving as important as food and water.

Don’t get me wrong. Christine and I work well together. It’s been a real blessing to have joined her at Abbey of the Arts. I love helping with the online retreats and co-leading pilgrimages with her. And we’re both home-bodies who love cooking dinner together and watching some shows, curled up on the couch with our dog. But we’re not permanently attached at the hip and that’s a great thing.

Time alone and away from our work together means that we are refreshed and renewed upon our return.