I am delighted to share another beautiful submission to the Monk in the World guest post series from the community. Read of for Mary Van Denend’s post “Girls in the Trees.” 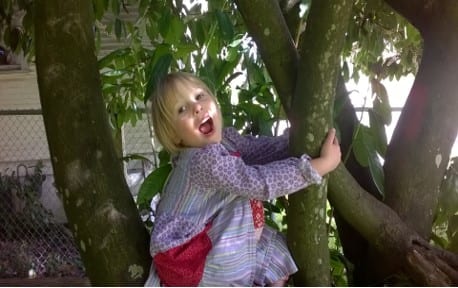 My granddaughters are playing “jungle,” scrambling up branches as high as they dare go, in a leafy playground tree, fat as a hot air balloon.  We’ve exhausted the slides, the swings, the merry-go-round, the balance beams, and me. It’s only April but the day has turned unseasonably warm.  The tree’s shade offers coolness.

Lucia, the youngest, screeches from her perch in a red and purple peasant dress we just purchased at Good Will. “Look, I’m a baby monkey! I’m a baby monkey!”, she chatters in a high pitch. At four, she’s charming and fearless; always choosing the highest slide, the fastest swing, always wanting the top bunk at home.

Elsa, with hazel eyes and hair like dark honey, middle child of moods and shadows, hides, then clambers, then hides again. Her lanky limbs in navy leggings camouflage her movements so I can’t tell what’s branch and what’s leg.  Their doctor says she’ll be 5’9’’ or 10”, maybe taller. She’s more leopard than monkey, stealthy and shy.

Anneke vacillates midway up. At eleven, she could easily reach the upper branches, but she’s hot and tired, eager for promised hot dogs back at the house. She’s dressed like a tropical bird today in blues, teals, and deep pink. Her ponytail a plume of golden feathers. Last summer she broke her foot jumping off a stone wall, and spent the next 8 weeks in a cast—she who loves to swim. Maybe that’s part of her hesitance.

When I was a kid I used to watch Tarzan movies with Johnny Weissmuller. I loved it when Jane would come swinging through the trees too, and they’d meet somewhere at a secret landing. She often had a chimp in her arms and could still fly like an acrobat through the canopy, on a single thick vine. I thought Jane was amazing.

Climbing trees was a big part of my childhood. Though never much of an athlete, I had good balance and wasn’t afraid to keep going higher, as long as I had a footing on something secure. The world looks different from inside a tree, no matter how high up. It’s cool and green, rustling and rough; it’s a patchwork of light and patterns, smelling mossy or sweet. You can peer over rooftops or at the peeling bark right in front of you.

Perhaps that’s one reason I love to visit monasteries. They’re often set in beautiful places surrounded by trees. Some create walking paths that lead visitors through gentle woods, to quiet corners for contemplation and prayer.  One such place, a Cistercian community about an hour and a half north, allows lay “monks” like me to peacefully wander and breathe in the forest.  Others may employ members as laborers who work in fruit or nut orchards as part of their communal life. We live in hazelnut country.

One summer in my early twenties I worked on an apple orchard in Wenatchee, Washington owned by friends.  For six weeks every day, starting at 8:00 am, we picked apples and cherries until noon, and then again late in the day. It was blazing hot inside those trees. Sap stuck to my hair and bees (which I’m mildly allergic to) buzzed over me.  My arms ached from stretching way beyond my normal reach to grab a perfect Golden Delicious or Gravenstein. At the end of each day I was exhausted, but proud of myself too. I’ve never done anything like that before or since. It was also the summer I read the Lord of the Rings trilogy for the first time, on the recommendation of my landlords. Now I can’t think of Tolkien without thinking about that orchard and those trees. Without romanticizing the itchy skin and sore muscles, that summer I felt strong and brave.

I wonder if kids climb trees the way we used to anymore. Sadly, I kind of doubt it. Too many indoor distractions—cell phones, video games, 150 TV channels. Now there are miniature climbing walls on many playgrounds, including the one near my house, and rock climbing courses through local Parks & Rec. All of which can be a good thing for building confidence and coordination, for learning about teamwork and trust.

But there’s nothing quite like finding yourself under a quilt of leaves in the fork of a sweetgum in Fall, surrounded by bright red stars. Or gathering cones from the thick candelabra arms of a Sitka spruce, breathing an evergreen story into your lungs. And you, you’re the one who climbed there by your own strength and wits. What I hope my three granddaughters will remember when they’re teenagers and beyond: there’s a place you can go where the world grows quiet and serene; there’s a branch somewhere waiting for you, where a goldfinch might be hiding, where the leaves whisper your name. 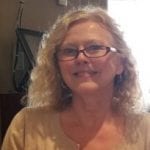 Mary Van Denend makes her home in Oregon’s lush Willamette Valley, though her childhood was very nomadic. She’s a poet and essayist, with a MFA in Creative Writing (Seattle Pacific), and the author of a chapbook, Watermarks, and many other publications. She’s a contemplative in spirit and a wanderer by heart. She loves to read, cook, hike, travel, and paint.