I am delighted to share another beautiful submission to the Monk in the World guest post series from the community. Read on for Susan Fish’s reflection “Stilling the Whirlwind.”

“I begin to understand why the saints were rarely married women,” wrote Anne Morrow Lindbergh in her classic book, A Gift from the Sea. “I am convinced it has nothing inherently to do, as I once supposed, with chastity or children. It has to do primarily with distractions. The bearing, rearing, feeding and educating of children; the running of a house with its thousand details; human relationships with their myriad pulls—woman’s normal occupations in general run counter to creative life, or contemplative life, or saintly life.”

This summer, just as Lindbergh temporarily left her usual life behind to go to the sea, so I left behind my normal occupations—as mother, wife, dog walker, chief cook and bottle-washer—for a very short time to lean toward creativity, contemplation and the saintly life.

I went to Italy. For two days.

The story behind that story involved found days during a business trip to Switzerland, shockingly cheap flights, and the mustering of a great deal of courage to travel on my own to a country whose language I don’t really speak.

Lindbergh speaks for me when she writes, “I cannot be a nun in the midst of family life. I would not want to be.” But for a whirlwind two days, yes, perhaps.

I booked a stay in a convent in Florence and my most important destination was to climb the many steps that lead to the 100-year-old San Miniato church in time to listen to the monks sing vespers.

Part of my purpose in this trip was to research a novel, partly set in Florence. I had been once before, and this time I wanted to go alone, to serve my creative project and my soul. I pictured myself moving fast and unencumbered through the streets, carrying only the lightest and most essential of possessions (a toothbrush, a passport and a change of underwear), deciding for myself where I would stop and where I would go.

Instead, I found myself in the midst of the state that Lindbergh calls “torn-to-pieces-hood,” surrounded and slowed by thousands upon thousands of tourists, anxious about getting lost, feeling the foreignness of a foreign city. Even the nuns seemed distracted, busy about many things.

I witnessed those who were centred: the monks who faithfully, daily, performed their offices in the crypt of the church on the hill. The coolness of the marble steps I sat upon and the listening to their voices, whose words I did not understand, but God did—those gave me an hour’s peace. And then I was out in the inner and outer chaos once more.

The last time I had been to Florence, it had been a warm, green, quiet March. Now the city was baked in the intense summer heat, swarming with mosquitos and tourists alike. Contemplation felt improbable, if not impossible, and I wondered how I would think about the trip, how I would write about it.

And then, everything shifted.

Catherine of Siena lived fifty miles and 650 years from today’s Florence.  Lindbergh quotes Catherine, saint and mystic, who says, “The cell of self-knowledge is the stall in which the pilgrim must be reborn.”

It was true for me too. When the city and the tourists became too much for me, that was when I became a monk in the world: I found a small stone doorstep and sat quietly, allowing the noise and the chaos of the world to go by. I let go of my literary agenda that said I needed to visit three museums, two shops, a church and a vertical garden during my 25 hours in the city. I released my disappointment that Florence had not been the magical experience I had remembered. I made myself at home within myself. As Lindbergh says, quoting another writer, I found “the stilling of the soul within the activities of the mind and body so that it might be still as the axis of a revolving wheel is still.”

As I had imagined, I had darted through the city, boldly, avidly, sucking the marrow out of the experience—a whirlwind on a whirlwind trip. But it was in that stilling of my soul, mind and body, even for a short while, that I was able to be present to God, to myself, to the world around me. I thought of another monk in the world, the prophet Elijah, who looked for and did not find God in the great whirlwind, in the powerful earthquake, or in the fire—only to truly find God in the still small voice that came afterwards. 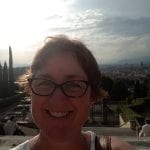 Susan Fish is a writer and editor who lives in Waterloo, Ontario, Canada with her husband, three young adult children and one wild dog. She has finished the novel she was researching on her whirlwind trip to Florence. Visit her online at storywell.ca.