Feast of St. Ciaran ~ A love note from your online abbess 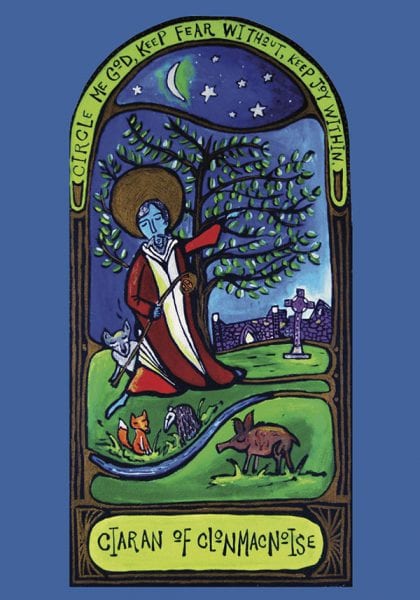 September 9th is the Feast of Ciaran of Clonmacnoise, one of the great Irish saints. He lived in the 6th century and is one of the great monastic founders called the “Twelve Apostles of Ireland.” Ciaran had a kinship with animals. There are stories of him befriending a fox who would carry his Psalter back and forth to his teacher so he could learn. He had a cow which gave milk to all of the Abbey. The cow was so revered that when she died, her hide became a kind of relic and it was said to offer healing, and whoever laid on it would go to heaven. Ciaran would also put his books on the antlers of a stag, as a kind of book rest. It was also said that a boar became his first monk.

There is a story that Ciaran goes out to the island of Inismor to visit with the great Abbott Enda. There they both have a dream of great fruitful trees growing beside a stream in the middle of Ireland. In the vision they could see the tree protecting the entire island with abundant fruit provided.

Enda told Ciaran: “The great tree is you, Ciaran, for you are great in the eyes of God and all people. All of Ireland will be sheltered by the grace in you, and many will be nourished by your fasting and prayers. Go to the center of Ireland, and found your church on the banks of a stream.”

I love this great and flourishing tree as symbol of Ciaran’s call in life. He was moving toward his own soul’s ripening. The dream pointed the way.

He founded his monastery at the intersection of the river Shannon running north to south, and the esker, a system of ridges forming a natural roadway, which runs across Ireland from east to west. Clonmacnoise became one of the largest and most significant monasteries of the entire Irish church as a center of learning.

What dreams are calling to you as summer begins to turn to autumn (or winter into spring if you are in the southern hemisphere)?