The Soul’s Slow Ripening: 12 Celtic Practices for Seekers of the Sacred ~ A love note from your online abbess 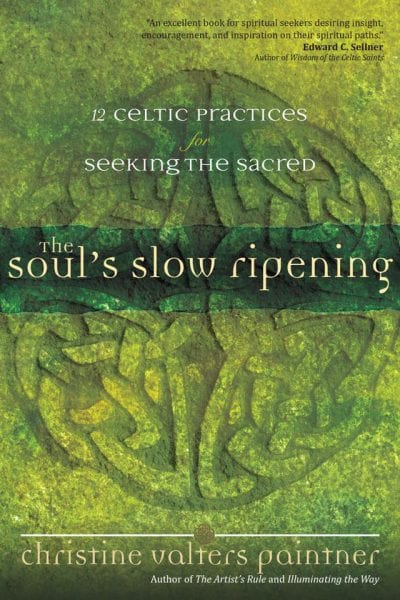 In 2007 I traveled to Ireland with my husband John and began to fall in love with the path of Irish monasticism. I discovered stories and a way of moving through the world that felt more spiral and less linear, more organic and less structured. The early period of Irish monasticism is quite unique in that it was less influenced by the Roman church and desire for uniformity of practice. The Irish monks integrated Christian teachings with the Druidic wisdom of their ancestors, and created a spirituality that was much more indigenous to the place they lived. It honoured the landscape and the places that were already considered holy, it honoured the rhythm of the seasons as sacred.

Five years later, as the result of much listening to our lives and following the threads that were unfolding, John and I embarked on a midlife pilgrimage and moved from the U.S. to Europe. First came time in Vienna, the city where my father was buried, and then six months later we settled in Galway, Ireland, on the wild west coast of the very fringes of the European continent. Our journey was very much into the unknown. We did not know when we left behind the life we loved in Seattle where the following years would take us. The unfolding journey has been far more wonderful than anything I could have imagined.

We have found in Ireland an even richer immersion in Irish culture and ways of being in the world, which are decidedly less controlled, structured, and planned than the American ways we are used to. We have learned to embrace Irish understanding of time with more fluidity. This is challenging at times, but ultimately invites us into a way of being that is more relaxed and spontaneous. There are often no street signs to guide you and so you have to make peace with getting lost more often.

Along the way, we have been introduced to many of the great Irish saints of this land, whose stories offer the kind of wisdom the desert monks also brought. The Irish saints were profoundly influenced by desert spirituality and they sought out wilderness places and radical solitude for deepened intimacy with the divine. We knew that monasticism had flourished in Ireland in the early Middle Ages, but were unprepared for just how many monastic ruins saturate this landscape. Within an hour’s drive of our home are dozens of monasteries which are now stone sanctuaries, overgrown with herbs and vines, but still holding the prayers of thousands. We were also unprepared for the deep hunger that people had to visit this sacred land in ways that were slow-paced, community-building, and nourishing to the spirit. Leading pilgrimages here remains one of our great joys.

In addition to the sacred land, come a variety of spiritual practices unique to the Celtic imagination. Practices which include walking the rounds at holy places sunwise, in harmony with cosmic forces, as a way to arrive, ask permission to be received, and move out of our linear thought process. There are practices of encircling oneself as a means of protection from harmful energies, of peregrinatio, a form of pilgrimage unique to Ireland. The Irish monks also treasured learning by heart, blessing each moment, and listening to the wisdom of dreams.

My newest book coming in September, The Soul’s Slow Ripening: 12 Celtic Practices for Seekers of the Sacred, is a love letter back to this land that has adopted me, welcomed me in with such care and warmth. It is my way of celebrating all that makes this place beautiful and sacred.

Edward C. Sellner, who wrote the wonderful book Wisdom of the Celtic Saints had this to say:

“Christine Valters Painter has written another excellent book for spiritual seekers desiring insight, encouragement, and inspiration on their spiritual paths. In The Soul’s Slow Ripening, she provides readers a series of practices inspired by the Irish traditions that will help readers, as she says, live into ‘new ways of being’ by pursuing such helpful practices as working with dreams, going on pilgrimages, having a soul friend, and seeking solitude. I cannot recommend enough this practical guide to soul-making.”

If you pre-order you can receive a free gift from me to you of an online mini-retreat. Email a copy of your receipt to my wonderful assistant Melinda and she will send you the free gift.