Feast of St. Patrick ~ A Love Note from Your Online Abbess 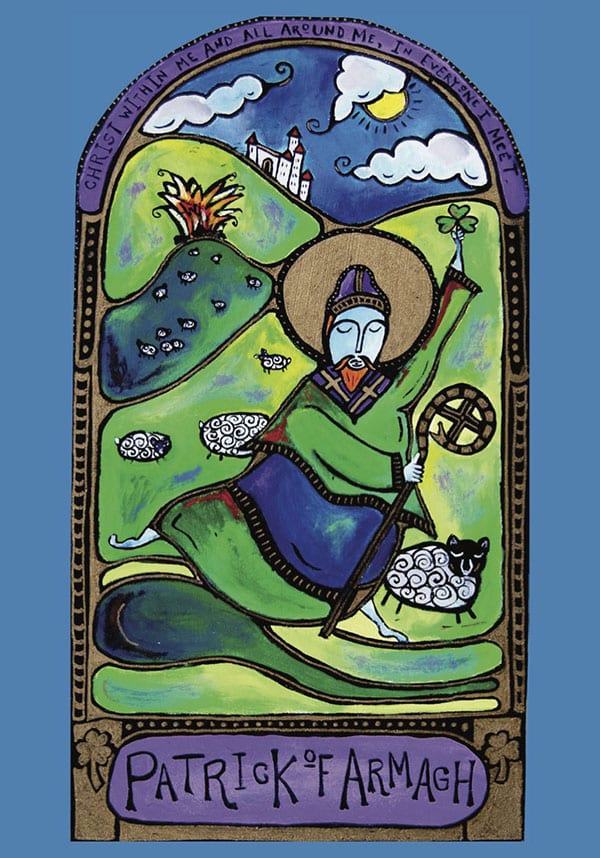 *This poem first appeared in The Galway Review

March 17th is the feast of St. Patrick who is the patron saint of Ireland, and the most well-known of all the Irish saints. He was born in 390 near England’s west coast or in Wales. When he was young, about sixteen years old, he was captured by pirates and taken to Ireland where he lived as a slave for six years.  He endured many hardships including hunger, thirst, and cold under the rule of a cruel pagan king.

It was during his enslavement, while spending long hours in solitude tending sheep, that he had a spiritual awakening. Through dreams and other voices, Patrick was able to escape and return back home again. He set out for Gaul for many years to learn theology and prepare himself for his future ministry. After many years passed, he had another dream where he heard the Irish people calling out to him to return to the land of his enslavement. Patrick’s name actually means “one who frees hostages,” and when he returns he is very vocal in his opposition to slavery, including women.

He returned to Ireland in 432 and spent the rest of his life preaching the message of Christianity and helping to establish the Christian church in Ireland. There is a great deal of evidence that Patrick was not the one to bring Christianity to Ireland, that it had already begun to flower, but certainly he was instrumental in this role.

I find his story intriguing. Here was a man enslaved, who escaped by divine intervention, and then hears the call to return to the land of his slavery and he goes willingly. He must have experienced more than his share of discomfort at the thought.

There are churches founded by Patrick in the area around Galway as well. One of my favorite sites is Inchgoaill island on Lough Corrib, just a few miles north of us. Legend tells us that Patrick was banished here for a time by local druids. The name of the place means “island of the stranger.” The island is now uninhabited, but there is a stone church at the site where Patrick’s 5th century wooden church would have been, as well as a marker stone where his nephew and navigator is buried, one of the oldest Christian markers we have. There is a later 12th century church nearby as well. We bring our pilgrims here for a morning of silence and solitude and you can hear the wisdom in those ancient stones.

How are you being called in your life to stay with what is uncomfortable and to perhaps even return to a place where you did not feel free, in the service of freedom?