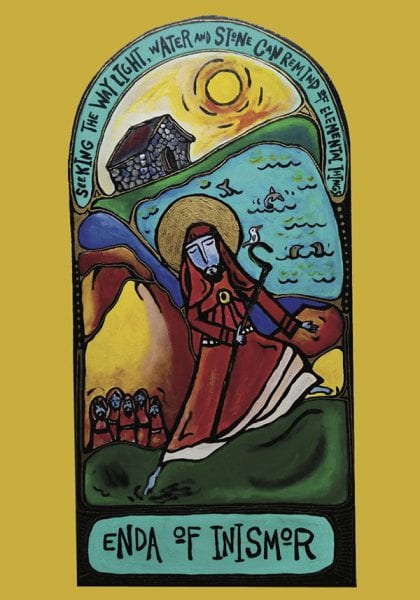 We are in the process of sharing our four new Irish saints which Marcy Hall has painted, inspired by my new book forthcoming this fall – The Soul’s Slow Ripening: Twelve Celtic Practices for Seekers of the Sacred (through Ave Maria Press.)  Each of the twelve chapters includes a story of an Irish saint. In addition to the release of new icons, we are also releasing an album of Celtic songs compiled from several friends of the Abbey. Please see more details below!

This week I introduce to you St. Enda:

It must have been the light
slanting across veils of rain,
when this island, all grey stone and bare
became a vision in gold and gleam

or perhaps it was the smell of sea,
wind swirling up the stony spine,
gulls criss-cross, weaving a new story,
one more truly your own

and something in you had already
bowed low, astonished,
you found yourself singing
after so many years of silence

and the great betrayals of your life
sheared away like winter’s wool,
a quiet descends on your thoughts
and you know there is no leaving.

Slowly, hundreds follow also seeking
the way light and water and stone
can remind of elemental things,
how time suspends as it travels

out on the tide,
returns with its offering:
your reflection in the pools formed
on shore, you no longer look through but in.

Saint Enda was originally a warrior king in the province of Ulster. His sister had already become an Abbess and tried to convinced him to do likewise. At first, Enda is willing to lay down his arms, but wants to marry and asks his sister for a wife from the convent. His sister agrees, but the woman she promises has died and she asks her brother to look at the corpse and see the reality that we will all die. He has a change of heart and decides to study for the priesthood.

In the year 484 his brother who was a king in the province of Munster gave Enda some land on the island of Inismor, one of the three Aran islands, where he set up a monastery. Enda is known as “the patriarch of Irish monasticism” because of his impact on the spread of monastic spirituality and most of the monks of his time would have at least visited Enda to gain wisdom from him including St. Ciaran, St. Brendan, St. Columcille, and St. Sourney. Inismor became an important pilgrimage destination.

Inismor is still a very sacred place to spend time. We visit on our pilgrimages for the day and spend six nights when we go on a writing retreat. The island is covered with various holy ruins of ancient churches dedicated to various saints. At the very western end of the island are what is known as the Seven Churches, a site so named because of its size and importance. Seven was a sacred number. On the eastern end of the island is the monastery Enda founded and the place he is said to be buried. On the smallest of the Aran islands, Inisheer, there is also a holy well dedicated to St. Enda.