I am delighted to share another beautiful submission to the Monk in the World guest post series from the community. Read on for Dotti Delffs‘ reflection, Spiritual Practicals.

When I first heard of spiritual practices I thought you had to be Catholic or Greek Orthodox or some sort of woo-woo denomination to practice them. Then about twelve years ago, I was talking to a friend who had just completed a Benedictine spiritual formation program. I had no idea what such a program would involve but something inside me said, “I have to do that.” Two days later, I was sitting in a large room of strangers who were speaking a new language, and who seemed way close to God.

For the next two years I learned about prayer, listening, journaling, silence, meditation, spiritual direction and other spiritual practices. I learned what the word “intentional” meant. I learned my Enneagram type and began to make sense of the thoughts and behaviors that had baffled me most of my life. I was introduced to Benedict and his Way. I saw nuns protest violence in war and take to the streets to do spiritual direction with homeless people. I was drawn into this mystical life with God that I had always desired but had never encountered in my evangelical Southern Baptist church.

At first I was overwhelmed. I understood that “practice” means ongoing attempts, but I just couldn’t practice like everyone else seemed to so naturally. I had my moments and these kept me going while I waited for the practices to become easier and not so mystical. I wanted God just to slip them into me one day when I wasn’t looking. I was missing the point of spiritual practice, but starting out I was all the raw material I had to work with. I assumed I did these practices for my own benefit, but they seemed so disruptive. I had a busy life filled with people and responsibilities. I needed more time. I needed a quieter life. I needed to go away to be alone with God.

Then after recovering from cancer, I started to work out again and ended up in a class called “therapeutic yoga,” intended for people with injuries or challenges. While the trends dictated adding more heat and speed to yoga classes, this one was slow and cool. There were no mirrors (which I highly recommend) and our mats became our islands, our own small piece of the earth. What I loved most about the class was my teacher’s ability to break down a pose into its components, recruiting and warming up parts of our bodies until we combined them to build the final pose.

This method of thinking led me to reflect on my life in the same way. What were the components to becoming more intentional with God? I soon found myself contemplating my everyday life and the small things I could do to build a spiritual practice. They were small things, components of larger practices, like focusing on my breathing as I cleaned up the kitchen, but they fit who I am.

So I began to call them “spiritual practicals” instead of practices. While practices seemed large and lofty, I was pleased to look up “practical” in my dictionary and find it means “relating to what is real rather than to what is possible or imagined, likely to succeed and reasonable to do or use, appropriate or suited for actual use.” This shift in focus, with its implication for success in everyday use, felt like an invitation to me.

One of my favorite spiritual practicals came about when I tripped over the phrase “practice suffering” in a devotional I was reading. The more I thought about it, the more my heart grew curious. “Why would I want to do that? Don’t I suffer enough?” Then I realized, “No, I don’t—not really.”

Long lines at grocery stores. Traffic that’s not moving. Last-minute cancellations. These “first-world problems” are mostly out of my control, yet they make me furiously frustrated. If my anger or frustration is disproportionate to my situation, which almost always involves waiting, then I have not suffered enough to take my eyes off myself. Whether it is waiting for my turn in traffic, or waiting for an answer to prayer, I can teach myself to relax in the present moment.

There are two ways I can accomplish this: 1) Once a day, just say no to convenience and comfort. Instead, choose the longest line. Refuse dessert. Drive slower. Test my own patience. Practice waiting. 2) Bring my attention to the present moment by asking what is this situation saying to me right then.

In Romans 5:3 Paul says, “suffering produces perseverance.” I don’t really think he was talking about waiting in line or delayed gratification.  He was referring to suffering because of belief in Jesus. Most of us don’t face that kind of suffering regularly. And I suspect if we can’t say no to an extra dessert, or wait patiently for the light to change, we don’t stand a chance when the really tough stuff happens.

Studying my own life and, in a sense, putting a frame around a small aspect and naming it, creates intention. It speaks to my roots that began in the pews of a Southern Baptist church but also to my deep wellspring of desire to know God in a way that bears no explanation. I’ve learned spiritual practices are both personal and universal—and always practical. 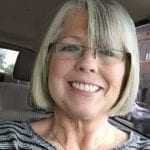 Dotti Delffs, from Michigan, is a caregiver to older people who want to stay in their own homes. She loves all things having to do with spiritual practice. She is trained as a counselor and spiritual director.